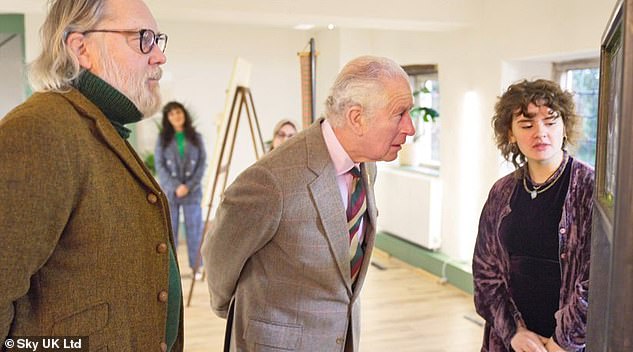 Six aprons are being fastened. The contenders have been set fiendish challenges against the clock.

There is sweat, tears and a touch of family backstory as they get to work producing intricate and jaw-dropping creations.

No, it’s not another cookery show – the participants here are working with wood, iron and glass. Think of it as a MasterChef for blacksmiths, stonemasons, weavers, pargeters (that’s decorative plastering, since you ask) and other craftspeople you’d expect to find up a ladder in a cathedral.

And who is the John Torode equivalent? Drum roll, please, for Prince Charles, to whom the final products are presented for scrutiny.

Prince Charles, who has a long history of supporting endangered crafts through The Prince’s Foundation, is pictured with contestant Francesca at Highgrove

Alas, the Prince of Wales doesn’t dispense any Gregg Wallace-style gags, but he is rather twinkly of eye when he sees a creation he likes.

The format for this Sky Arts series, called The Prince’s Master Crafters: The Next Generation, is altogether gentler than MasterChef too, in that there is no voting off and no overall winner, but that’s deliberate, says the programme’s host Jim Moir (aka comedian Vic Reeves), himself a keen artist and designer.

‘Having said that, everybody’s in a competitive market so there was a bit of friendly rivalry. We did award a special prize every week, though, which was a bit of fun.’ 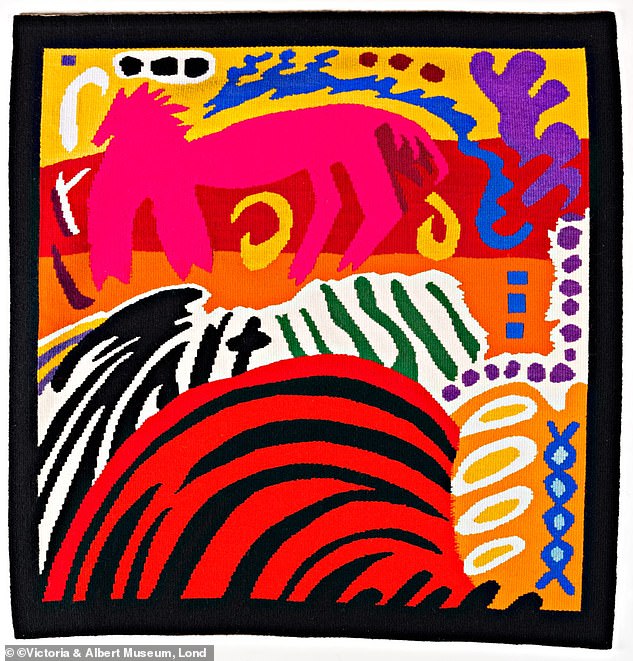 The involvement of Prince Charles is quite a coup, adds Jim. ‘He is, I would say, the biggest expert in heritage crafts in the country.

‘He knows what he’s talking about and he’s passionate about it. We went to Highgrove for the participants to present their final pieces and he was so taken with what they’d produced.’

Derek Hunt, 60, the show’s stained-glass expert, believes fans of The Repair Shop will be similarly mesmerised by this show. ‘There is something hypnotic about watching someone make something,’ he says.

‘I do demonstrations and people love to stand and watch. People simply like to see things being made.’

The prince, who has a long history of supporting endangered crafts through The Prince’s Foundation, uses the show to applaud these skills. ‘The urge to make something is such a centring process,’ he says.

‘Machines are very useful but they are not the be all and end all.’ He talks of ‘the process of hand and eye and what can be produced by the individual’, likening the infinite possibilities of human creativity to ‘snowflakes – all different patterns’.

Machines aren’t the be all and end all. The urge to make something is such a centring process – Prince Charles

Over the seven episodes of the show, the crafters – who are all skilled in one particular discipline – have to try out other crafts, and then produce a final showstopper piece. Although one crafter is in her 40s (wood carver Jo, who’s 41), the others are much younger.

Rachel, 30, is the pargeter, Sani, 24, the weaver, and Alex, 23, the blacksmith. Stoneworker Charlie and stained-glass artist Francesca are both 19.

It’s this generation that The Prince’s Foundation tries to reach, by encouraging youngsters to consider careers in practical fields. The tasks set for the contestants include weaving cloth on a loom, creating a wood carving inspired by William Morris and the Arts and Crafts movement, and making a fire poker with intricate leaf detailing.

One of the stars of the series is likely to be Derbyshire blacksmith Phil Carter, 38, who set the poker task. He tells me he normally can’t watch TV portrayals of blacksmiths without wanting to ‘throw something at the screen’.

Don’t get him started on The Lord Of The Rings, which gets blacksmithing wrong in the first scene, apparently. ‘It opens with this bit about the rings being forged.

‘But they weren’t forging! They were casting! There wasn’t an anvil in sight. They had no hammers. They were pouring molten stuff into a cast, which isn’t forging at all.’

He argues that while the public image of the blacksmith is ‘big meaty men hammering horseshoes with their shirt off’, this is entirely wrong.

He doesn’t make horseshoes for starters (farriers do that), and he rarely ‘hammers the hell’ out of anything.

‘Quite the opposite. A lot of the intricate, decorative stuff requires you to be quite dainty in your approach. It’s all wrong that you need to be a big burly bloke. Some of the best blacksmiths are women.’

So it’s interesting that four of the six crafters in this programme are women. Wood carver Jo studied fashion and worked for high street brands, but in 2019, disillusioned with ‘fast fashion’, she went back to college to study wood carving.

‘I’d gone to a talk about it and I was gripped,’ she says. ‘Being able to work at a piece of wood and see something you have designed emerge is incredible.’

It’s not giving much away to say that, by the end, all six earn a royal seal of approval. But more importantly, they show that these crafts should not be written off yet.