As their libel trial entered its second week in London today, Rebekah Vardy and Coleen Rooney picked two very distinct looks for their Monday in court.

After wearing some of Kate Middleton’s favourite designers last week, Rebekah, 40, was at it again, with a yellow tweed co-ord from Alessandra Rich priced at £2,095.

Meanwhile, Coleen, 36, once again went for the thrifty option and recycled a Kooples trouser suit she debuted in March, costing £605,.

However, she couldn’t resist a splash of WAG bling with a Chanel infinity handle bag costing £3,280 as she made her way to the High Court today.

Coleen has been in a bitter feud with Rebekah since October 2019 after accusing her of leaking ‘false stories’ about her private life to the media, before claiming that she uncovered the culprit after carrying out a social media ‘sting operation’.

Coleen once again went for the thrifty option and recycled a Kooples pantsuit she debuted in March, costing £605. She was also sporting her medical boot

Wayne Rooney’s wife cut a casual silhouette in the grey suit for her day in court today.

She paired the loose blazer with a black t-shirt and rolled up her sleeves at the wrist.

She added a touch of bling to the outfit with a Chanel Infinity Handle bag worth £3,280.

While the mother-of-four still has to wear a medical boot due to an injury she sustained earlier this year, she made sure to wear a leather Gucci slipper worth £580 on the other foot.

Rebekah, 40, took the designer route this morning, with a yellow tweed co-ord from Alessandra Rich priced at £2,095. Meanwhile, Coleen brought some bling with a £3,280 Chanel bag 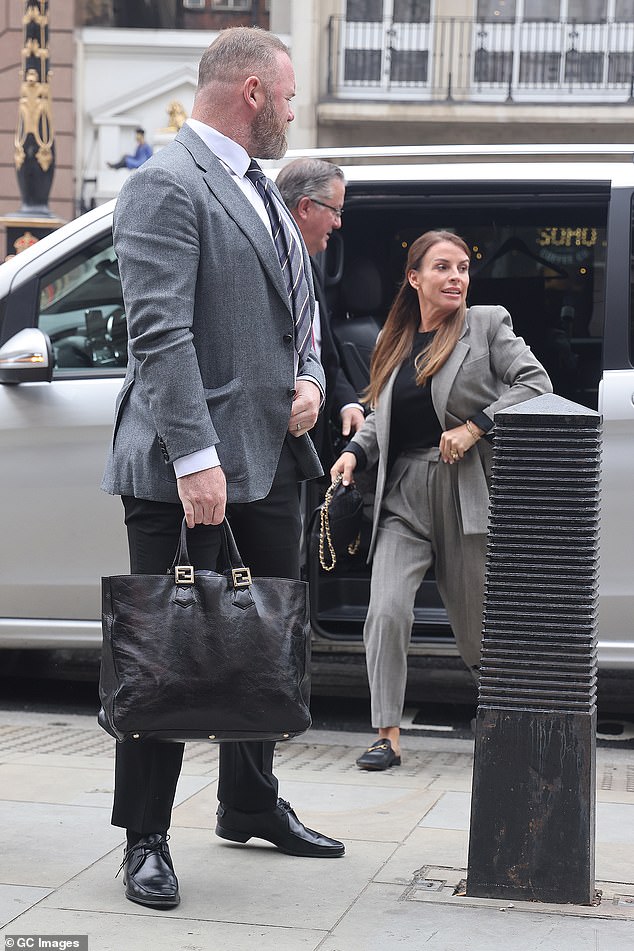 Coleen arrived, supported by her husband Wayne Rooney, who accompanied her to court today

Her hair was styled straight in a sling black do which revealed a pair of gold hoop earrings.

Her makeup was natural, with a lock of gloss on her lips, some bronzer and a sculpted brow .

Her demure court look was worlds away from her rival’s get up.

To kickstart her second week at the High Court, Rebekah Vardy made sure all eyes where on her in a yellow tweed co-ord from designer Alessandra Rich costing a whooping £2,095.

The designer is a favourite of Kate Middleton, who has worn her vintage-style dresses on several high profile occasions, including Prince Philip’s memorial service. 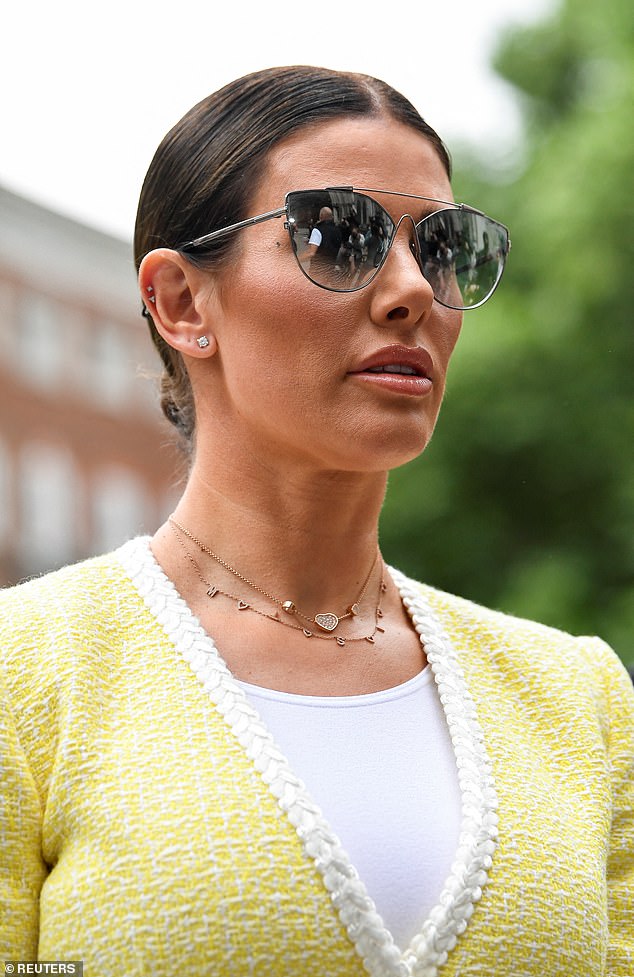 Rebekah stepped out of her car and made sure all eyes were on her and her yellow set. She accessorised with white stilettos and a Alexander McQueen tote 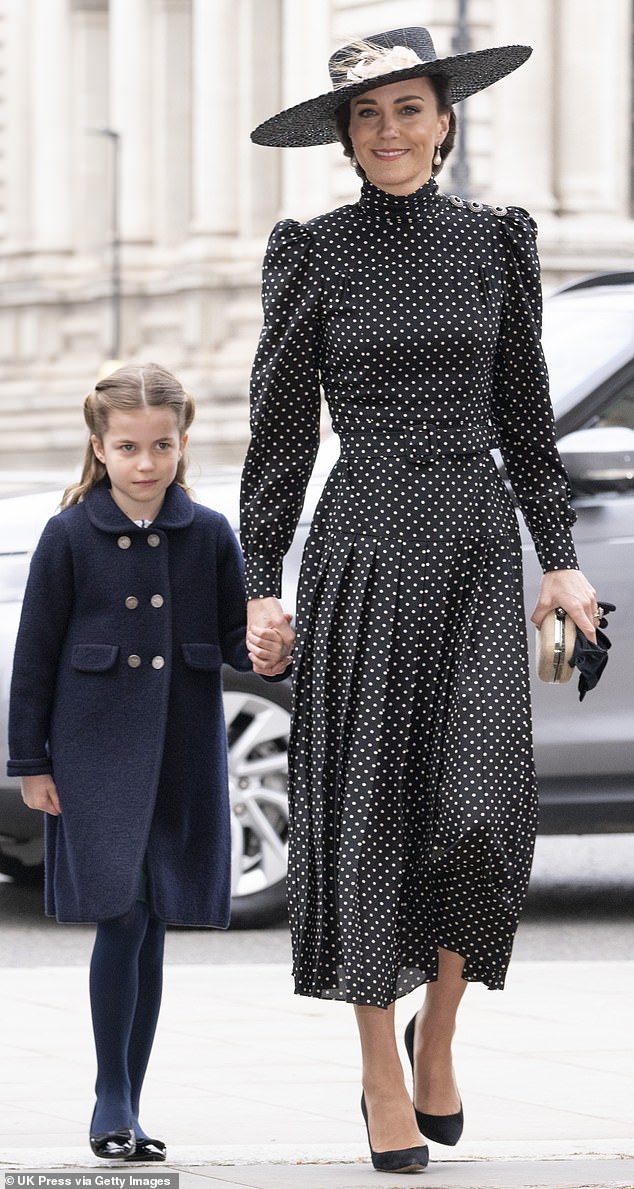 Dotty for Alessandra! The Duchess of Cambridge has made upmarket designer Alessandra Rich her go-to for high profile engagements, including Prince Philip’s memorial service

Her accessories were no less pricey, with an Alexander McQueen tote bag worth £1,890 at hand.

She strutted up the stairs of the High Court in a pair of white stiletto heels and a pair of Tom Ford glasses estimated to be in the hundreds.

Her brown locks were styled into a sleek ready-for-business bun with a middle parting.

The WAG sported a very glamourous makeup, with gloss and bronzer enhancing her natural glow. 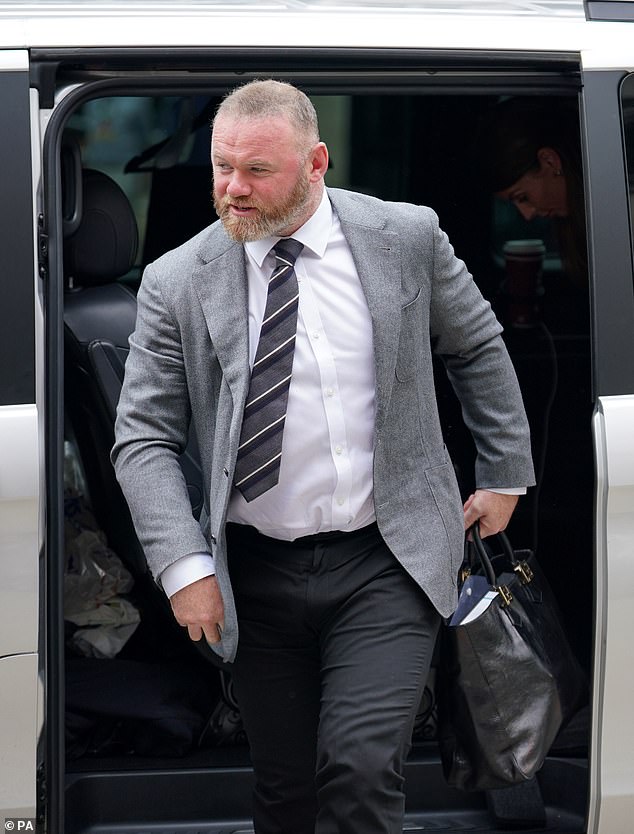 Wayne kept his look sobver with a white and black tie. He was since holding a leather bag, perhaps filled with legal documents

Coleen spruced her her look with Gucci slippers worth £580 and the Chanel bag. She was also wearing a pair of golden hoop earrings 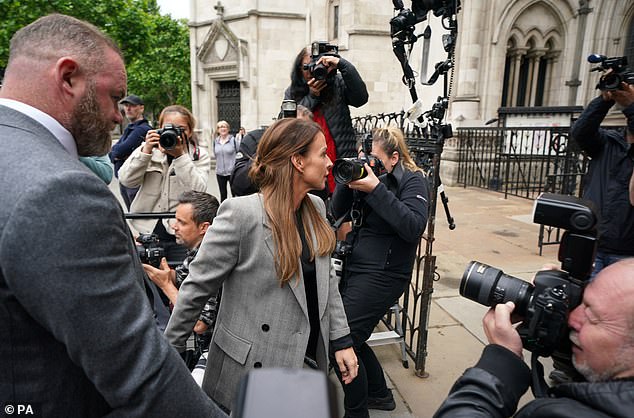 She completed the look with a pair of studded diamond earrings and a few bracelets on each wrist.

As their lawyers battle it out in court over their £3million libel suit, it looks like the WAGs are also competing in the styles stakes.

Today’s showing is in line with what the two rivals have worn last week, with Coleen going for a relatable look and Rebekah flaunting her wardrobe designer.

The case centres around a 2019 social media post by Coleen in which she said she had planted fake stories on her private Instagram account and accused Rebekah of leaking them to The Sun newspaper.

Rebekah, who is married to Leicester City striker Jamie Vardy, denies leaking stories to the media and is suing her fellow footballer’s wife for libel, while Coleen is defending the claim on the basis her post was ‘substantially true’. 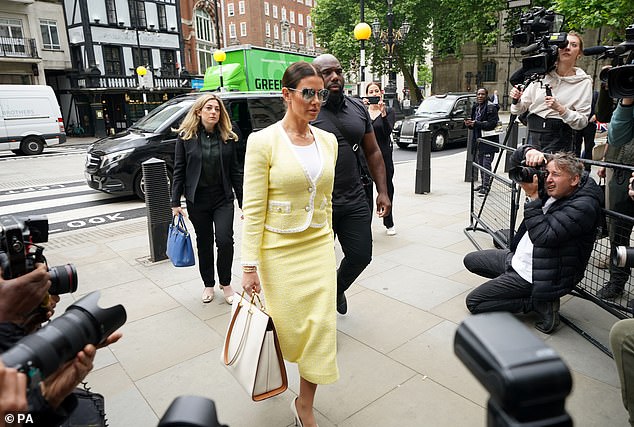 Making a splash! Rebekah strutted down to court this morning. She is expected to testify until later this afternoon 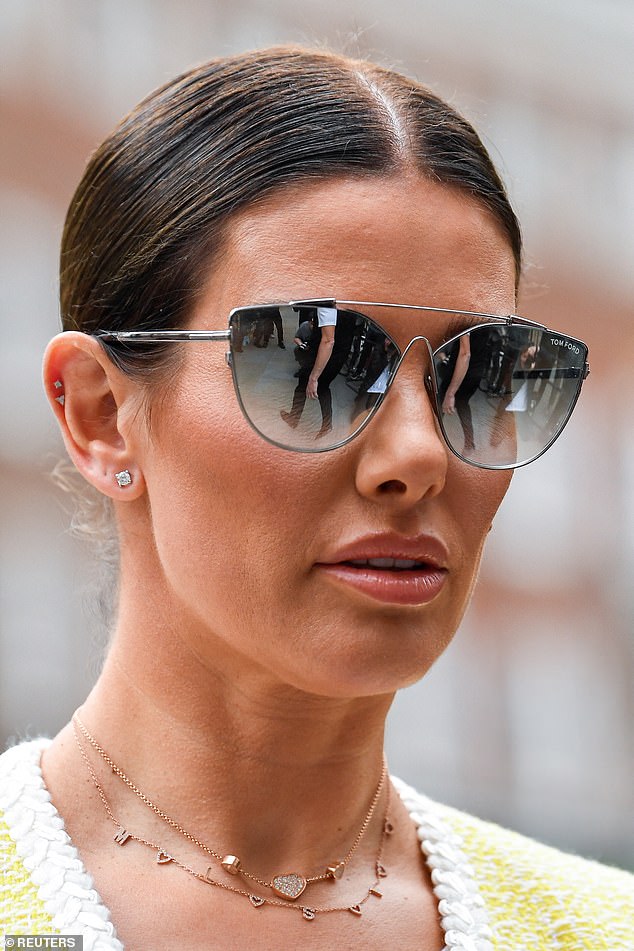 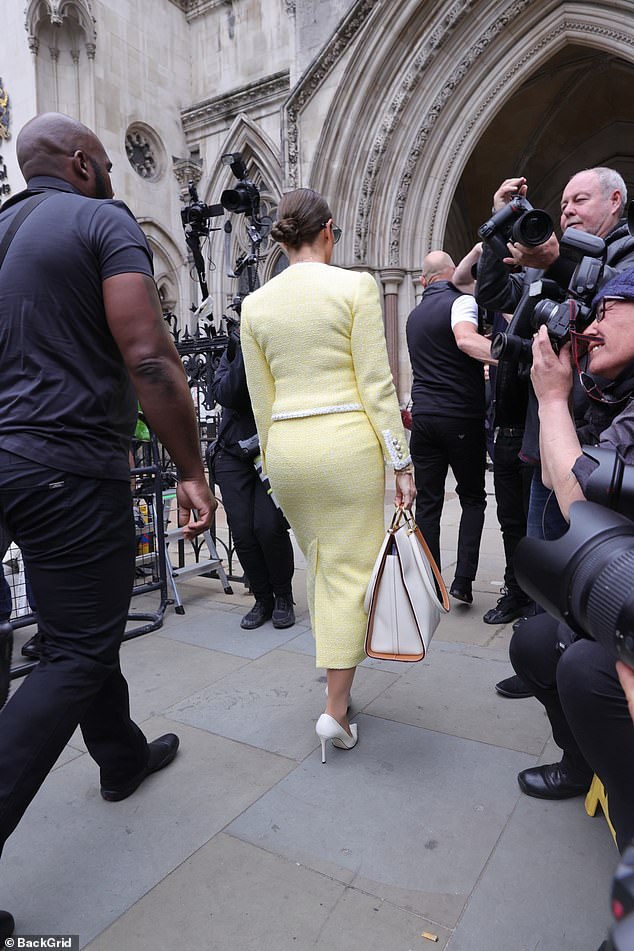 Ready to face the music! The WAGs had all the cameras on her this morning as she arrived in Court 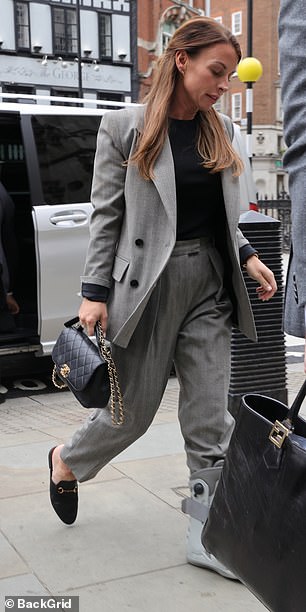 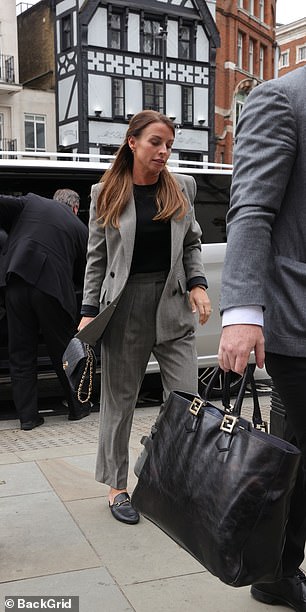 Coleen played it low-key in the grey wide-legged suit, and added a casual touch by rolling the sleeves at her wrist 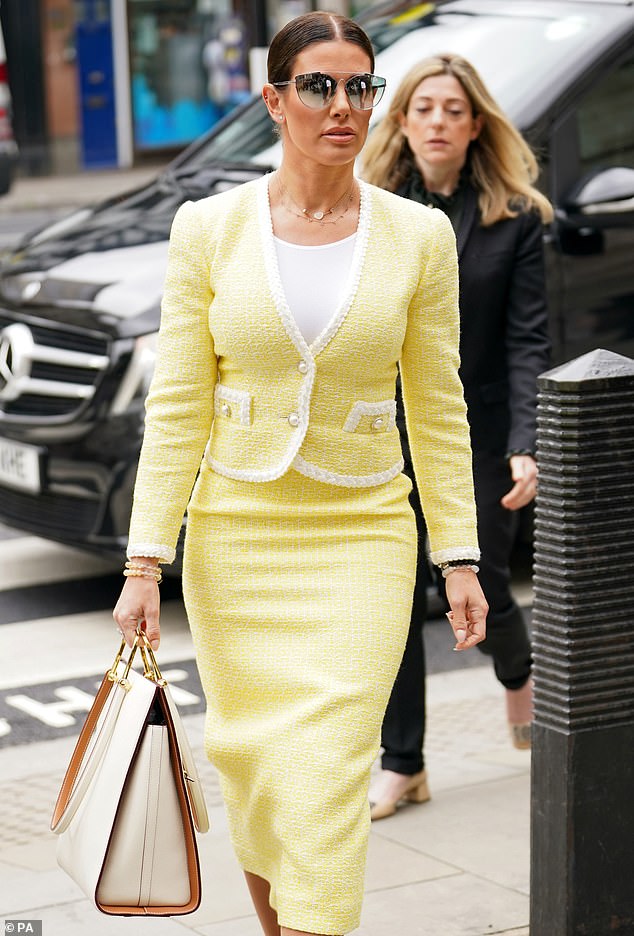 Making an entrance! Mother-of-five Rebekah looked unphased as she made her way to the High Court 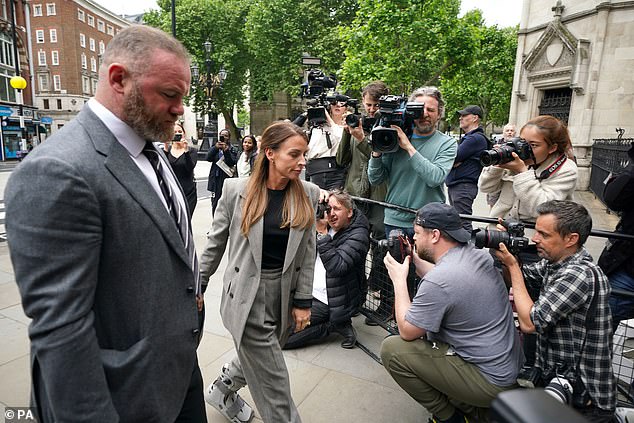