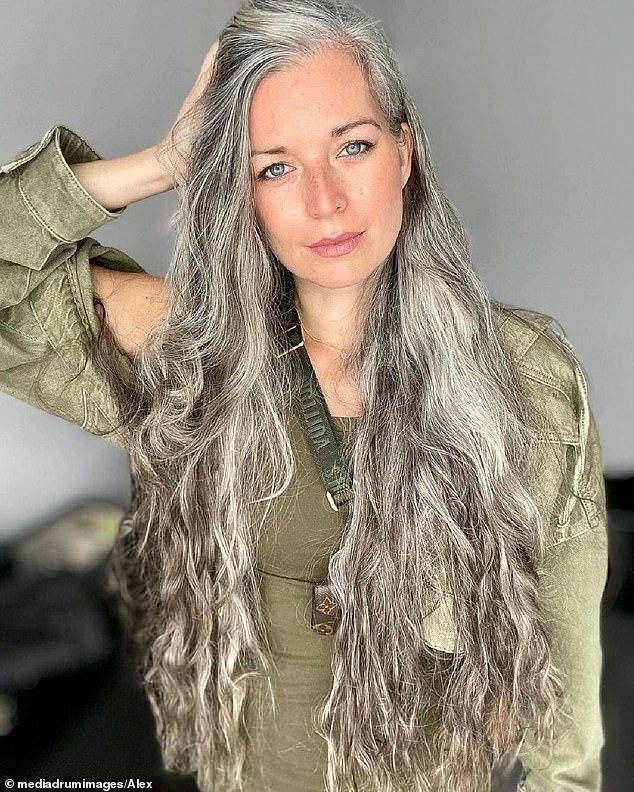 A mother-of-two has revealed how she ditched the hair dye to embrace her silver locks – and she now feels more stunning than ever with men calling her ‘beautiful.’

Aleksandra Arazna, 38, from London, tried to go blonde, attempting every trick in the trade, but she didn’t like her blonde hair. The only option Alex saw was to go dye-free and embrace her natural self.

The mother-of-two was tired of dyeing her rapidly greying hair every two weeks when she decided five-years ago to stop altogether.

However she confessed she has been met with criticism from strangers, saying: ‘It is like the moment I started going dye-free, people asked me questions like “Why are you doing that?” and “When will you dye it back?” I don’t care what anyone says. I love being natural.’

Aleksandra Arazna, 38, from London,  has revealed how she ditched the hair dye to embrace her silver locks – and she now feels more stunning than ever with men calling her ‘beautiful’

Alex decided to stop dyeing her hair at 33 and she began growing it to it’s full, Rapunzel style length.

She said: ‘The more my hair grew, the harder it was to dye. And now I like my hair growing in it’s natural, grey colour.

‘I have grown it very long now, around 80cm, along my hip line.

‘I have been stopped by people telling me that I am a natural beauty and it is amazing. 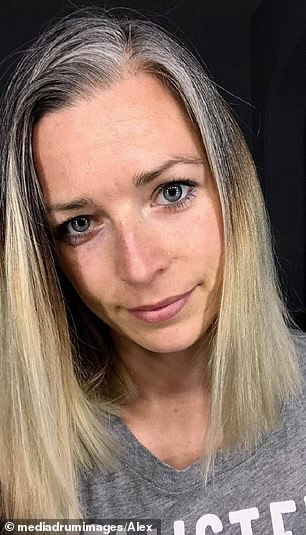 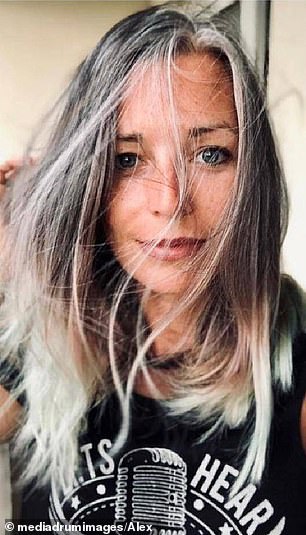 Alex decided to stop dyeing her hair at 33 and she began growing it to it’s full, Rapunzel style length (pictured, at 33, before giving up the hair dye) 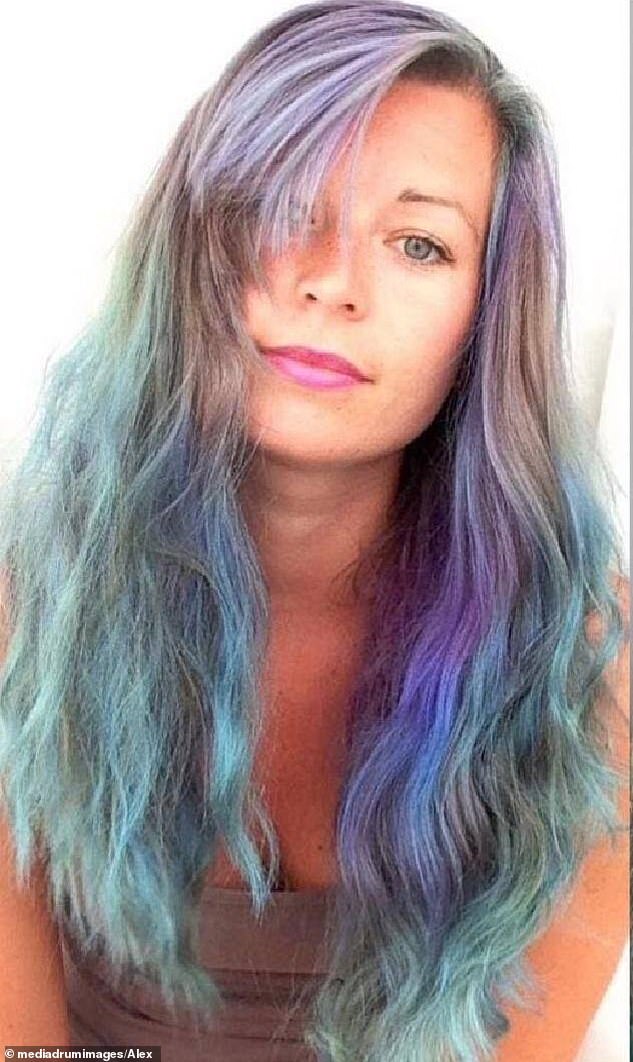 Alex pictured, with multi-colored hair when she was still using dye. She now has waist length silver locks

‘Some people even think that I have dye-ed my hair grey!’

However, it’s not all positive comments that Alex has received, she’s been met with criticism too. 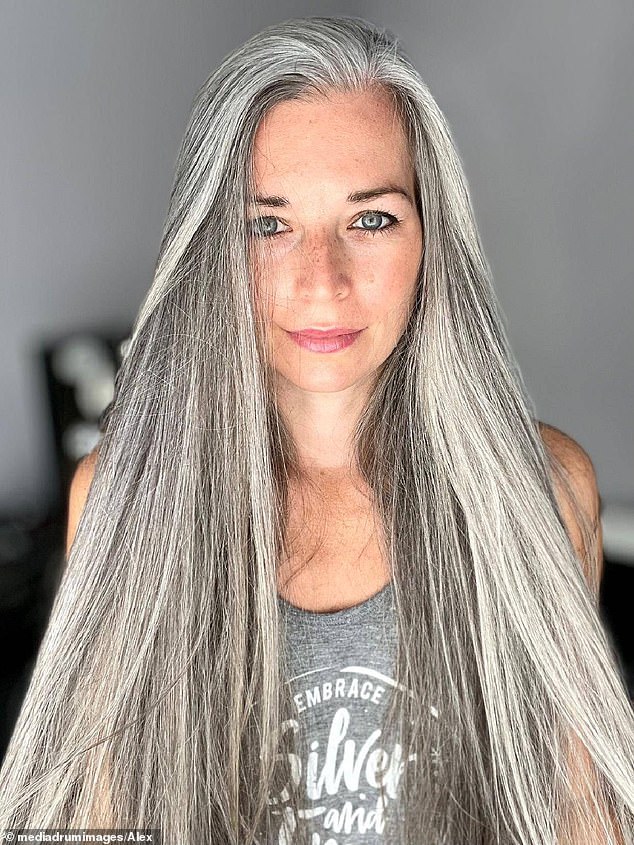 Alex follows a normal hair washing routine for her luscious long hair. She trims her ends occasionally and conditions with a purple mask.

Alex said initially her family thought she was joking after her decision to go silver.

She said: ‘My family thought I was joking 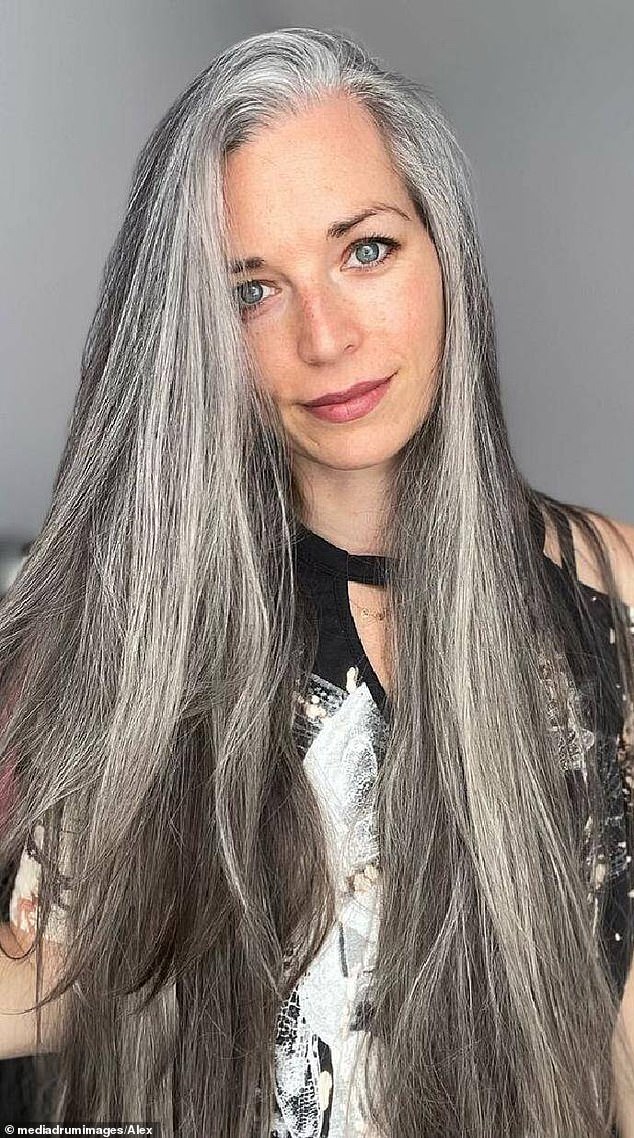 The mother-of-two showcases a loose, casual look (left) – but said she ‘doesn’t care’ about people asking her questions about her hair 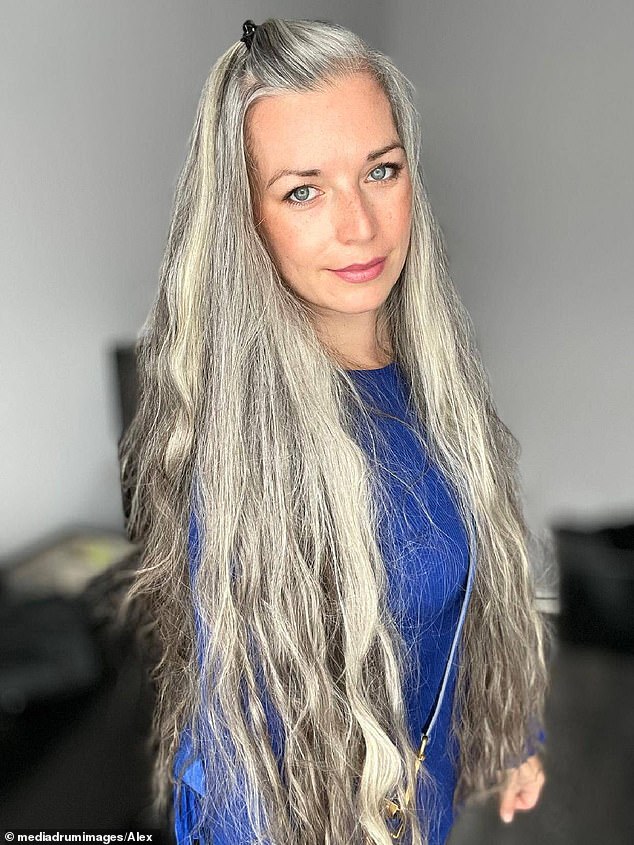 ‘They eventually started liking me for the natural look, me with my dye-free hair.

‘Even my mother and sister-in-law stopped dyeing their hair as a result.

After two years of going dye-free, Alex spotted a grey hair community on Instagram, where she is now a full time influencer.

She found her true calling in the community called Silver Sisters. 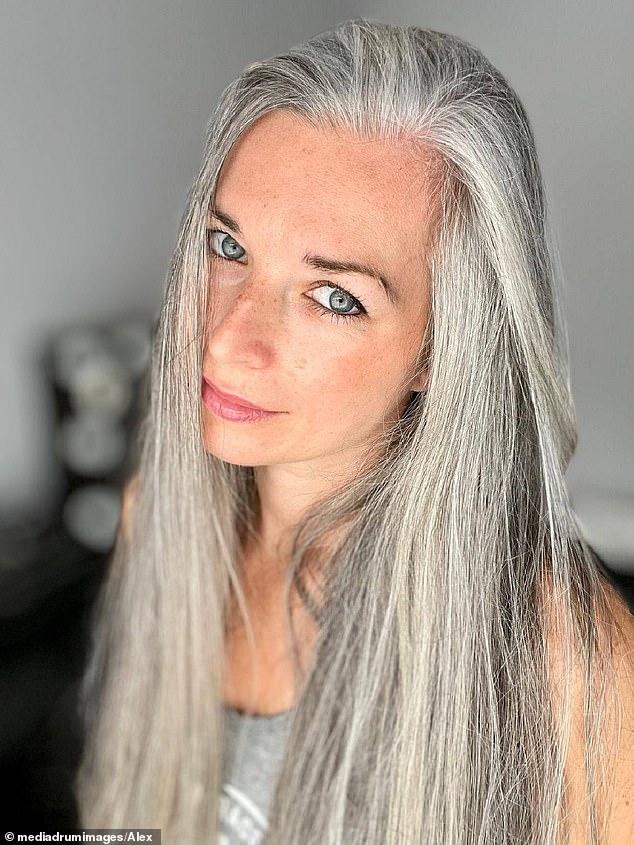 Aleksandra, who spent years dyeing her hair, decided to ditch the chemicals and go natural but is aware there is a social stigma around being grey 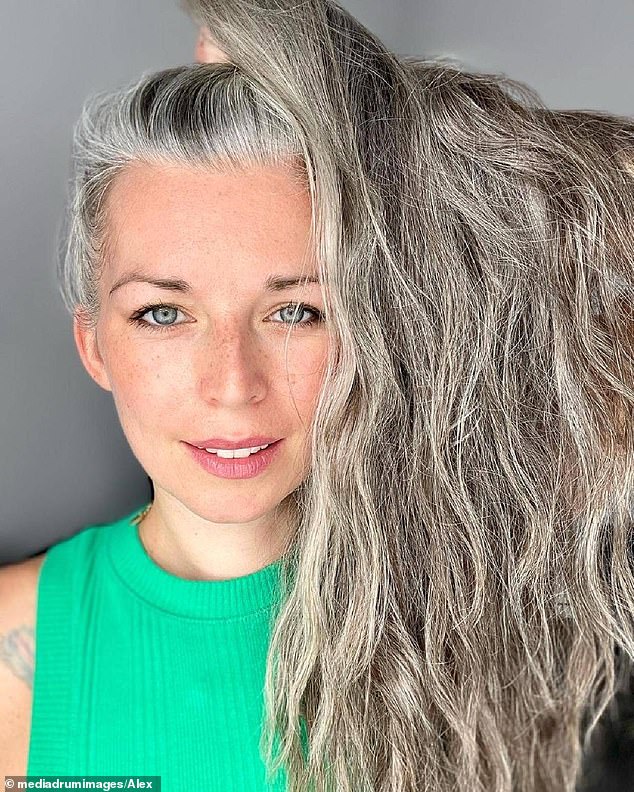 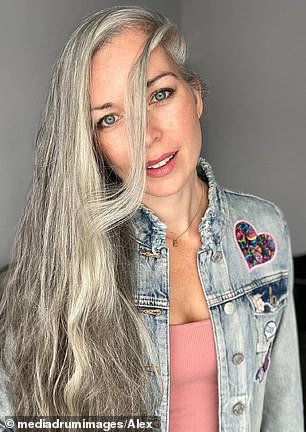 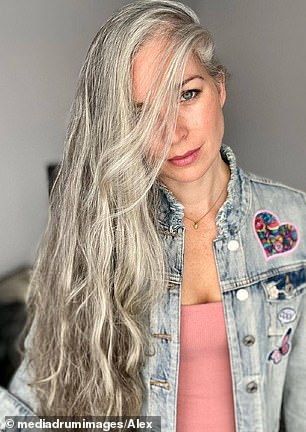 38-year-old Alex sometimes gets negative comments for her look, but is very comfortable within herself

Alex said: ‘I joined them straight away and became an example for other women.

‘I started supporting other women in their journey to embrace their dye-free hair and in their struggle to stop dyeing their hair.

Alex knows it can be hard for some women to stop dyeing their hair. She is aware it’s not easy as there is social stigmas attached to grey hair.

The 38-year-old said: ‘I would tell anyone who wants to go dye-free to take their time to decide. 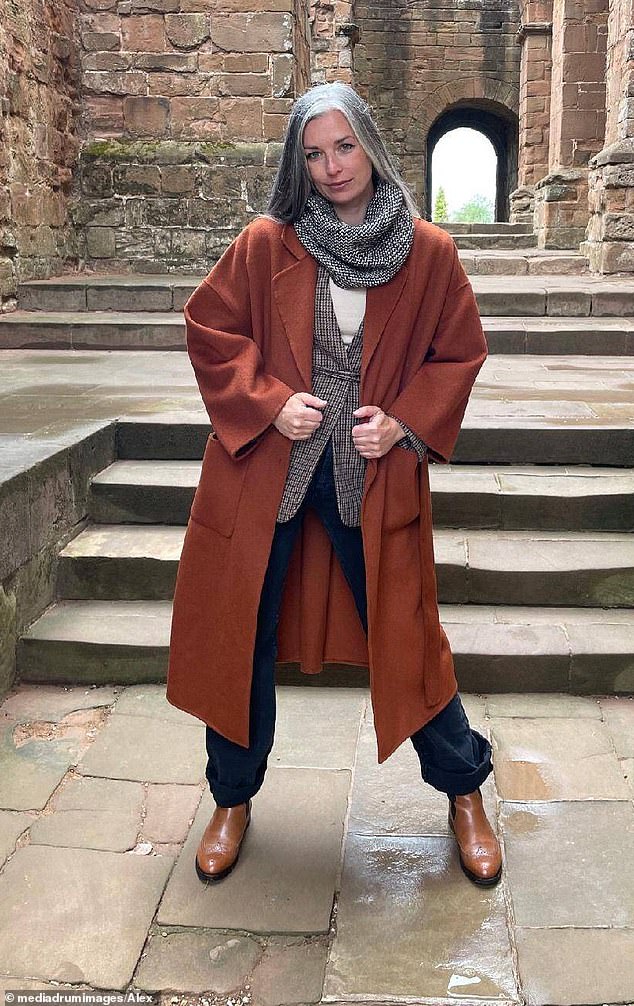 Alex matches her hair to her scarf in this autumnal outfit, blending soft greys with tan and black 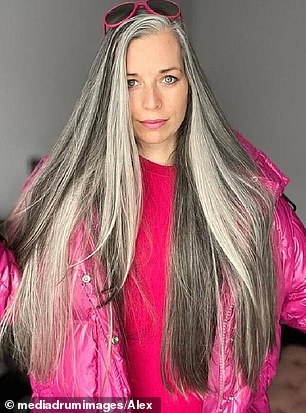 After two years of going dye-free, Alex spotted a grey hair community on Instagram, where she is now a full time influencer

‘And then they should just try, start with a first step.

‘There is always an option for them to turn around and start dyeing their hair again.

‘If they don’t feel confident with the idea, they shouldn’t do it.’

If you enjoyed this read more….