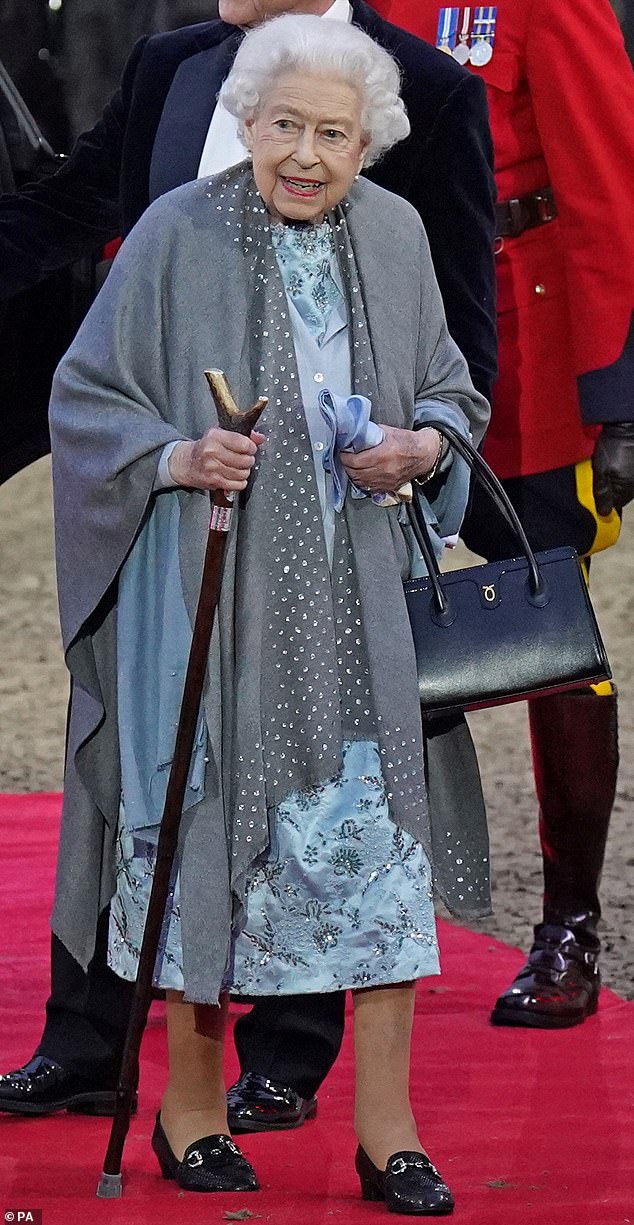 The Queen looking sprightly during her appearance at tonight’s Platinum Jubilee celebration in Windsor and walked form her Range Rover to her seat, allaying recent fears around her health.

Upon arriving at the ‘Gallop Through Time’ event, which was staged by the Royal Windsor Horse Show, the 96-year-old monarch was seen smiling as she exited her car, using a stick to make her way to her seat.

The monarch received a standing ovation from the crowd at the spectacular finale to the Royal Windsor Horse Show.

She handed her now familiar walking stick to a member of the greeting party as she carefully eased herself down from her Range Rover – in which she was accompanied by her youngest son, Prince Edward.

The Queen then carefully made her way to her seat in the Royal Box away from the glare of the cameras.

Although footage from the Royal Box was limited during the performance, the Queen was seen laughing and smiling with other guests. Her appearance last night will reassure the public given widespread concern about her health.

She has been forced to cancel a string of engagements in recent months and last week missed the State Opening of Parliament, symbolically asking her son, the Prince of Wales, and grandson, the Duke of Cambridge, to stand in for her.

But royal aides insist that despite what they describe as ‘episodic’ mobility issues, the monarch is in good spirits and very much in charge behind the scenes.

Her Majesty made a nod to the Platinum Jubilee theme of the event, opting to wear an all-silver outfit for the occasion.

She paired a blue-silver satin midi dress, complete with silver embroidery, with a grey shawl, encrusted with sparkling gems, and black low-heeled shoes.

The look was completed with a natural make-up look, featuring clear skin, light blush, and a pink lip. The monarch opted for her trademark hair style, wearing her short white locks in neat curls.

The Queen, pictured here upon her arrival at the ‘A Gallop Through History’ Platinum Jubilee celebration tonight, looked sprightly and smiling as she attended the event 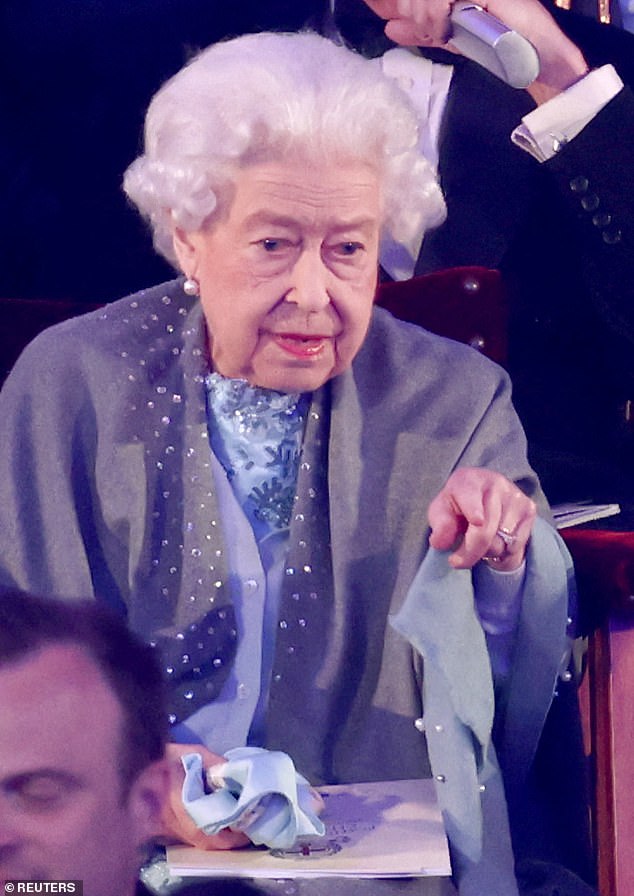 Her Majesty made a nod to the platinum theme of the event, opting to wear an outfit in tones of platinum and silver 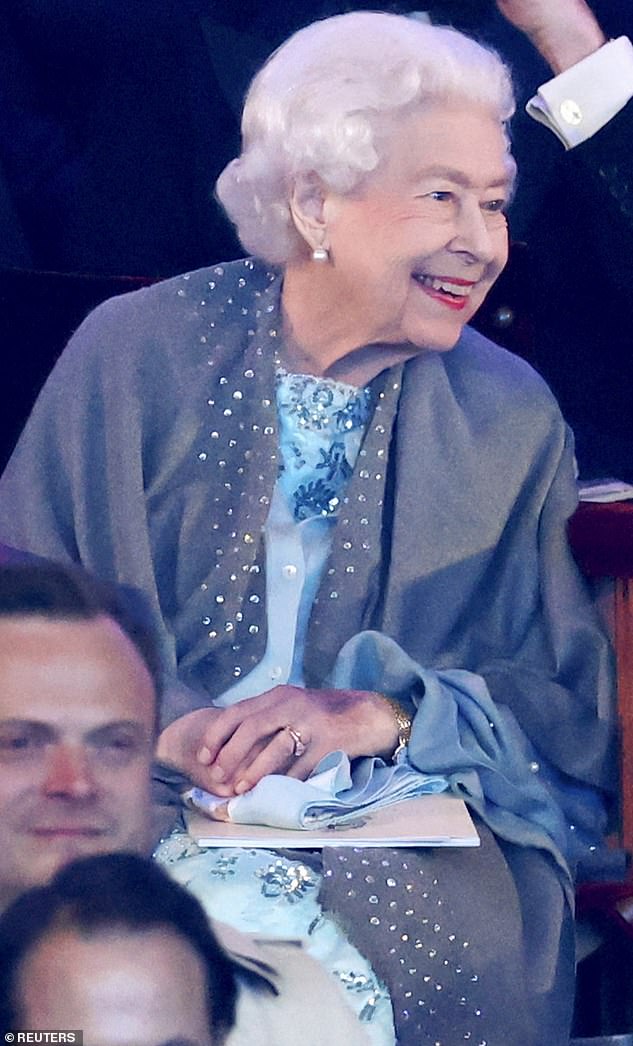 The monarch, whose dress and shawl featured glittering jewels and silver embroidery, looked healthy and radiant as she watched tonight’s show

The lavish performance, which took place near Windsor Castle, was broadcast from an on-site studio hub from inside the grounds of the castle.

On top of the celebrities paying tribute to the Queen, the gala also featured riding, dancing, acting and musical displays, with more than  1,300 performers, 500 horses, children’s choirs, a 75-piece orchestra and stars from stage and screen.

Different eras of British history were enacted onstage as part of the show. Dame Helen Mirren, who has played both Queen Elizabeths on TV and film, reprised her role as the Tudor Monarch.

At the show’s finale, some of the Queen’s horses and ponies were exhibited in the arena, alongside carriages from the Royal Mews.

Her Majesty’s sprightly appearance this evening follows her having to reluctantly pull out of giving the Queen’s Speech for the first time in 59 years on Tuesday due to ‘episodic mobility problems’.

Mobility issues have dogged the Queen since last year and have forced her to cancel a string of high-profile public engagements – with concern raised about whether the increasingly frail she will ever be seen in the Palace of Westminster again.

However, after missing the Queen’s Speech on Tuesday on doctor’s orders as she struggles to walk or stand for long periods, Her Majesty was spotted attending Windsor Royal Horse Show, initially choosing to stay in the passenger seat of her Range Rover, where she spoke to passers-by and watched horses in the parade ring. 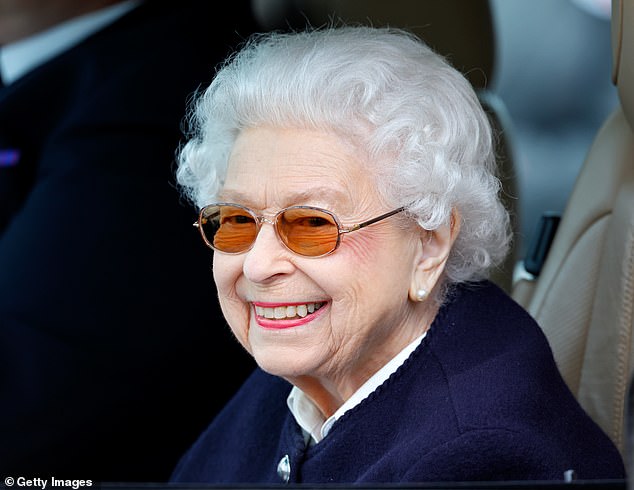 Today’s appearance, which saw her Majesty looking in good health, followed her recent outing to Windsor Royal Horse Show (pictured), which the royal was able to attend despite having to reluctantly pull out of giving the Queen’s Speech earlier in the week 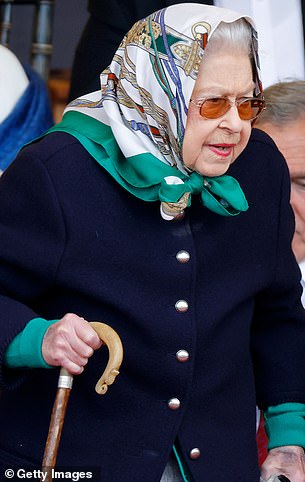 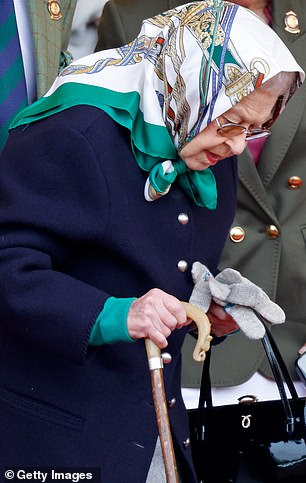 While attending the horse show in Windsor this week, her Majesty was seen walking to the grandstand from her car, with the aid of a walking stick

And after an hour or so, with the aid of a stick, she walked slowly around 30ft to her seat in the grandstand between her son Prince Edward and Penny Knatchbull, Countess Mountbatten of Burma. And the Queen looked pleased as punch to be there.

Edward’s wife Sophie, Countess of Wessex, was also there to support the monarch, whose highland pony won first place, securing her a trophy. Her Majesty also watched with pride as her granddaughter Lady Louise Windsor, driving the Duke of Edinburgh’s carriage, led the Fell Pony Society centenary parade.

Shortly afterwards the Queen walked unaided to her Range Rover, waving to cheering crowds as she headed back to Windsor Castle.