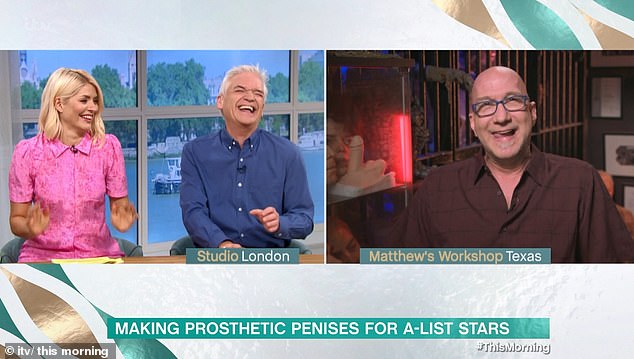 An award-winning prosthetic designer left presenters of ITV’s This Morning in fits of laughter after revealing how he is meeting the increase in demand for a prosthetic penis in Hollywood.

Speaking from his workshop in Texas, Matthew Mungle, 65, told presenters Philip Schofield and Holly Willoughby about the process of making a prosthetic penis and revealed he has worked with actors including Chris Hemsworth and Will Ferrell.

Philip and Holly failed to conceal their laughter as they looked at the questions they had prepared for Matthew.

They were in hysterics as they heard about the process of making a prosthetic penis and the price it costs to purchase.

Matthew Mungle has spent 40 years as a special effects artist with his work in Hollywood winning global recognition, including an Oscar for Dracula in 1993.

He tried to explain the sudden demand for a prosthetic penis, saying: ‘Your guess is as good as mine. I think people are just getting lax about seeing male genitals.

‘I think it’s also just a fad maybe we’re going through. Maybe at one point it will just relax and we’ll see it everywhere.

‘Once the penis goes on or they have a prosthetic penis that fits on their own penis. Then they don’t have to worry about that they can concentrate on acting.’

Matthew shared the process, saying: ‘First the director or producer will call me, they want a penis for a certain project.

‘I say ok, what’s the length of it, what’s the girth, how big are the testicles etc. I go from there.

‘Sometimes I have stock molds, sometimes I sculpt it and make a mold from there.’ 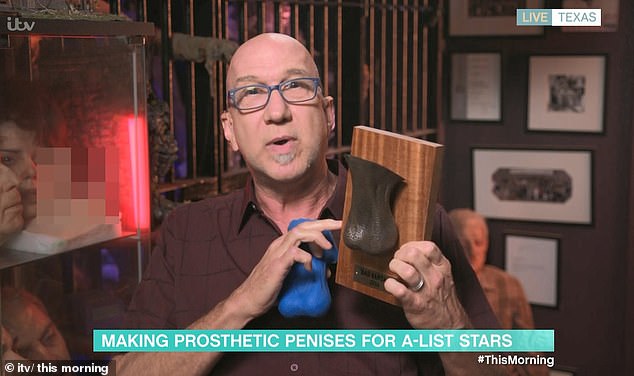 Philip struggled to hold back his laughter as he asked Matthew about making a penis for Chris Hemsworth to wear in the film Vacation released in 2015.

‘I’m so sorry, it was just the reaction from my friend here that’s made me laugh,’ he said, pointing to Holly.

‘I’m sure it was,’ Matthew responded.

He explained that those involved in making the film wanted the actor to have a larger penis for a scene where Chris would be wearing underwear.

Matthew continued: ‘We had to decide how big the penis was and how it was going to be attached to him. I think the scene is just funnier than funny.’

Holly was unable to control her laughter, as Philip said: ‘Obviously if you’re going to do something like that it would be nice to do it with your own. 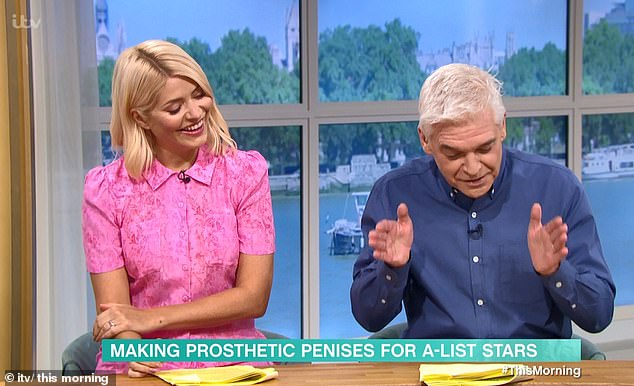 Matthew responded: ‘You bet, that’s usually what they want a bigger shlong. Maybe bigger testicles too.’

He revealed that Chris Hemsworth took the prosthetic home after production in a shadowbox and placed it on his mantlepiece with his Thor hammer.

Philip and Holly struggled to stop laughing as they asked Matthew about making a scrotum for Will Ferrell.

Matthew held up a master mold made from silicon as he revealed it was also used for the film Bad Santa.

‘They are sculpted from scratch because usually they are very specific about what they want. I’ve done this for quite a few years, made penis for things, so I do have quite a lot of stock molds. 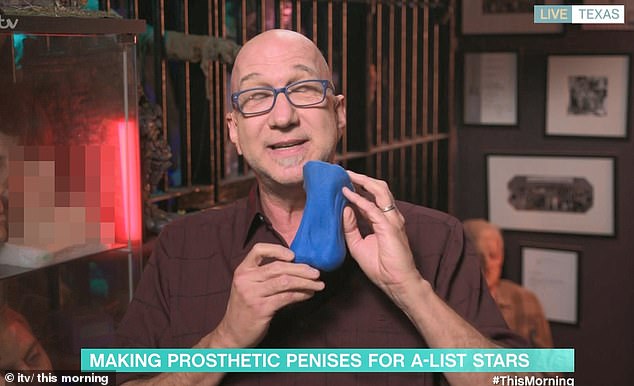 ‘When production calls they will ask for a certain length and I’ll send them a picture of what I have. If they want it longer or shorter I can always do that.’

‘Do you want one,’ Philip joked, after Holly asked if they are expensive.

Philip told Holly they would have to ‘club together’ to be able to afford to get her one.

Matthew said working on special effects for Jack Nicholson on the film Bucket List was a ‘great’ opportunity, while working on Wicked for Broadway was tough.

‘Glenn Close is a dear friend and amazing performer. She loves to do subtle prosthetics, which I love to do and change her character. 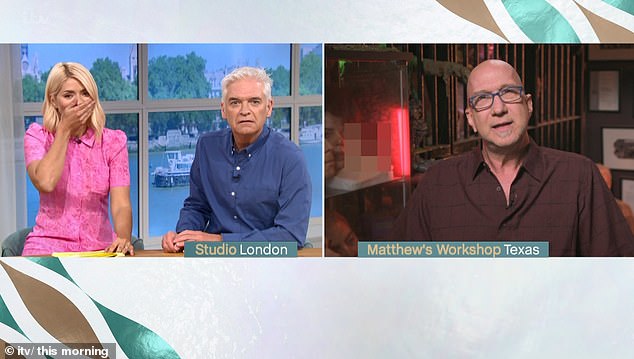 Many viewers took to Twitter to give their thought on the segment with one writing: ‘Only on This Morning, they have gone from talking to a man who makes artificial penises to a lady who is a pet psychic.’

‘This segment is actually quite funny. Bravo Holly and Phil,’ another commented.

A third said: ‘Is anyone watching #ThisMorning Holly and Phil laughing like little school kids over prosthetic penis has made my day.’

A fourth wrote: ‘In hysterics at this segment. Holly is so trying not to have fits of laughter. What a topic for morning TV’