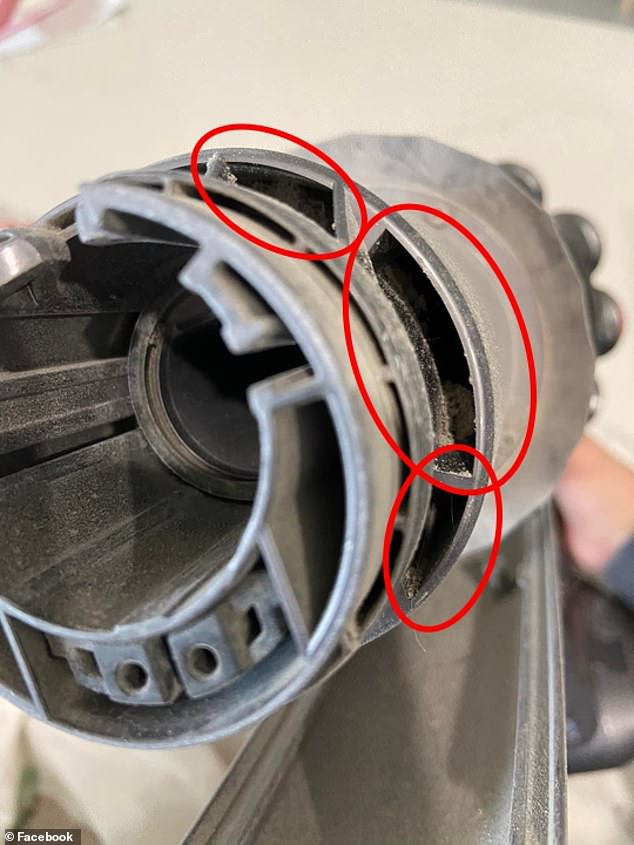 The disgusting hidden area of stick vacuums THOUSANDS are forgetting to clean: ‘The dirt just kept falling out’

A young mum has revealed the moment she discovered she had been cleaning her stick vacuum wrong – leading to a build-up of thick grime around the barrel.

The mum, disgusted by her discovery, posted pictures onto a popular Facebook cleaning group to warn others against making the same mistake.

The pictures show a plastic bag filled with fine dust as well as her three-year-old Dyson Absolute vacuum cleaner.

‘I was emptying the canister and banged it a couple of times like usual then all of this clumped dust kept coming out, for ten whole minutes,’ she wrote.

She went on to explain she kept banging until the dust stopped falling out of the cracks.

‘All that banging can’t be good for the vacuum, so I don’t suggest you do it how I did. But I had to get it all out,’ she said.

Despite acknowledging she is probably responsible for the build-up of grime she doesn’t know how to stop it from happening again.

‘How would you even know it is in there? Am I missing a cleaning or emptying step?’ she asked.

And it appears other Dyson owners have come across the same kind of dust build-up in their own vacuums.

The exact thing happened to me with my two-year-old vacuum. Maybe there wasn’t anything in the original instructions because I follow them and would have done something to avoid this if it was advised,’ one woman said. 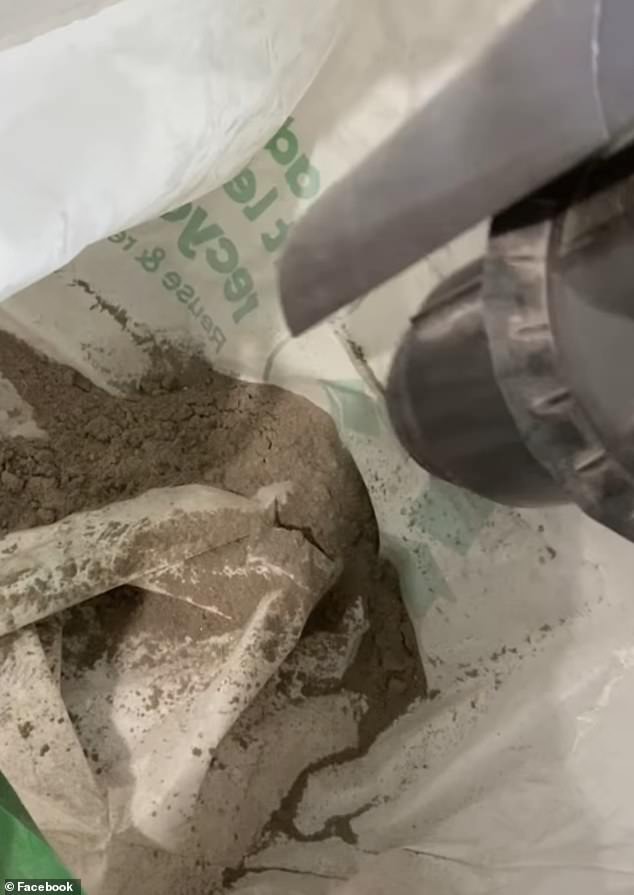 ‘I gave mine away, I never expected to do so much cleaning and pulling apart of my own vacuum,’ another added, defeated.

While others admitted to using leaf blowers and cans of compressed air to clear out the dust in their own machines.

How often do you clean out your vacuum?

‘I had huge problems with mine, I pull it apart once a month and give it a good clean out now,’ one mum said.

‘I use a mini air compressor to get rid of the fine dust but plan to buy a second vacuum the same and rotate them,’ said another.

Others told the young woman not to worry about ‘bashing’ the vacuum cleaner to get rid of the build-up.

‘I was instructed over the phone by Dyson to bang mine like this,’ one woman said.

‘I was surprised how much came out. They said they are built tough so can handle it.’

‘I took mine back to the store and the technician banged it like this, then it worked fine,’ added another.

Some said they run different parts of their vacuums under water – but cautioned others to read their own manuals to make sure it was appropriate.

Woolworths $9 Colgate Magik toothbrush: How to get your kids to brush teeth
How small Aussie business Rhodin Collection turned over $15,000 in 12 HOURS
Advertisement