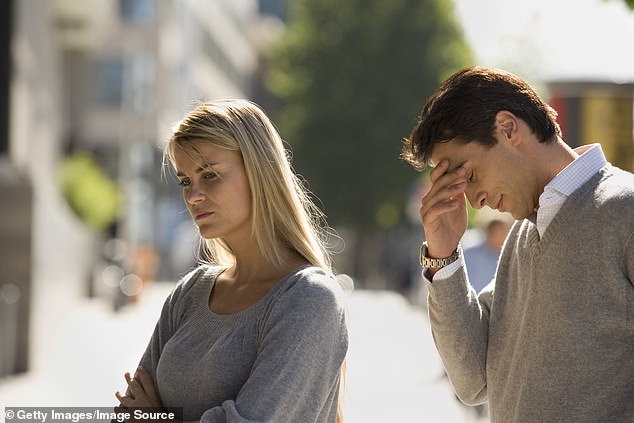 A woman has provoked a furious debate after asking whether she should end a friendship with a long-term male friend over his use of sex workers.

Writing on the British parenting forum Mumsnet, the woman explained that she had just discovered her friend regularly pays for sex.

She worries that he is exploiting vulnerable women who are coerced into the job, but also questions whether she is being too judgemental.

The reaction provoked furious replies – with many in favour of cutting him off, but others insisting she is too judgmental.

In her post, the woman explained how she had always wondered why her friend ‘never wanted to date after getting a divorce’.

She said that now this makes sense, but that she never had him down to ‘be the type’ to sleep with prostitutes and is very shocked.

She added: ‘I don’t know the circumstances behind why the women do that line of work but there’s always the risk that they’re not doing it of their own free will isn’t there? I feel like he could be exploiting vulnerable women.’

She later added that she had made her feelings clear to him, but that he didn’t think he was ‘doing anything wrong’. 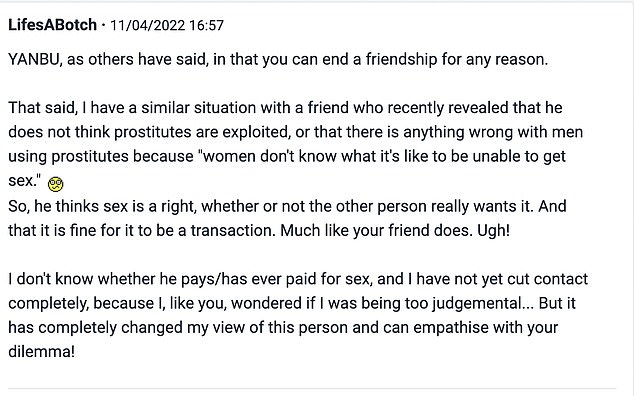 Another user said she’d been in the same position and feared she was being too judgmental, but it’s changed her view of her friend

She wrote, ‘There is no getting through to him that he is being exploitative as he’s adamant the people he sees are doing it off their own volition.

‘It’s a total lack of respect for women in general. He has two daughters and a son. What an example he is setting.’

Her concern and shock was echoed by other Mumsnet users.

One wrote, ‘I don’t judge the women who do it but I judge the men who use them. I hate the term sex worker also. It seems to normalise the buying and selling of women and it’s not true consent. I couldn’t be friends with him.’

Another wrote, ‘There are very few prostitutes who do it voluntarily. Mostly there is some form of coercion and/or someone else getting the majority of the money.’

But some defended her friend, including a woman who works as an escort who said it depends on where he’s meeting the women.

‘I work with a group of escorts. We are all on a website where theres all sorts of things advertised, cam work, phone calls, pictures. Theres a group of around 15 of us, everyone does it of their own free will and makes a decent amount of money from it,’ she said.

‘Everyone is safe, we share two apartments ( we book them and take turns using them, it’s literally 1 person per apartment on their booked days ) 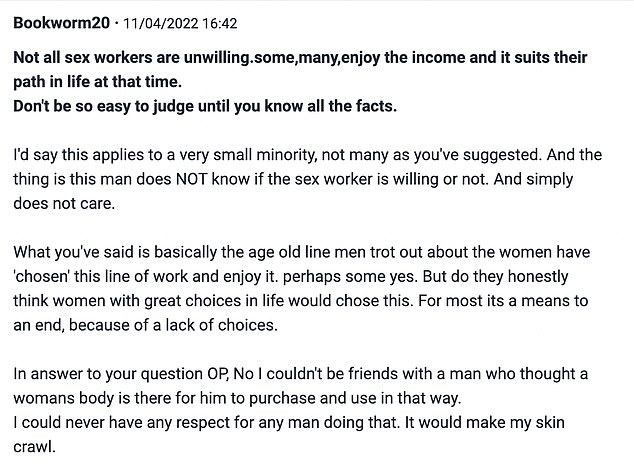 A handful of commenters argued that some women are happy in their careers as sex workers, but others argued that the man paying them has no idea whether that’s true for the women he’s seeing or not

Another echoed the same point, saying: ‘Brooke Magnanti (Belle du Jour) did well out of it, and seems happy. ‘There are women making thousands out of this career.

‘But a lot of the women are trafficked or forced into it. I don’t have a particular problem with sex work, but he needs to check whether these women are being exploited.’

Another added, ‘Not all sex workers are unwilling. Some may enjoy the income and it suits their path in life at the time.

‘Don’t be so easy to judge until you know all the facts.’

But to this, the woman responded, ‘That’s part of the problem, isn’t it.

‘Nobody does know all of the facts, that includes him.

‘There might be some women who have chosen the path because they want to, but a lot of the women who do it are doing it out of desperation or coercion.’ She added that her friend in question had insisted he was not exploiting the women.

She wrote that he defends his actions, saying he is ‘friends’ with several of the women and ‘knows they aren’t coerced.’ But this was met with derision by several users. One wrote, ‘It doesn’t matter. It’s about what it says about him and his values.

‘He is either ignorant to how buying access to women’s bodies affects everyone, or he…doesn’t care, so long as he gets to empty his balls. Either way, he isn’t a person I want to be around.’ 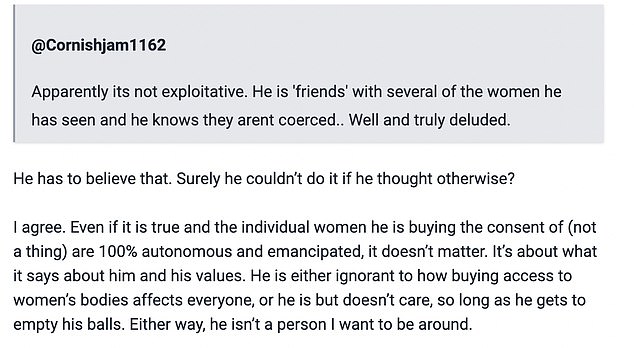 Others aid they couldn’t possibly be friends with a man who has no respect for women and sees them as a commodity, adding that ignorance is no excuse

One user added, ‘I have a similar situation with a friend who recently revealed that he does not think prostitutes are exploited, or that there is anything wrong with men using prostitutes because ‘women don’t know what it’s like to be unable to get sex’.

‘He thinks sex is a right, whether or not the other person really wants it. And that it is fine for it to be a transaction. Much like your friend does. Ugh!

‘I don’t know whether he pays/has ever paid for sex, and I have not yet cut contact completely, because I, like you, wondered if I was being too judgemental… But it has completely changed my view of this person and I can empathise with your dilemma!’

Shoppers rave about Kmart’s $30 cast iron pot some say is a perfect Le Creuset dupe
Can YOU spot the Queen’s favourite dog breed? This Corgi seek-and-find puzzle will test your skills
Advertisement