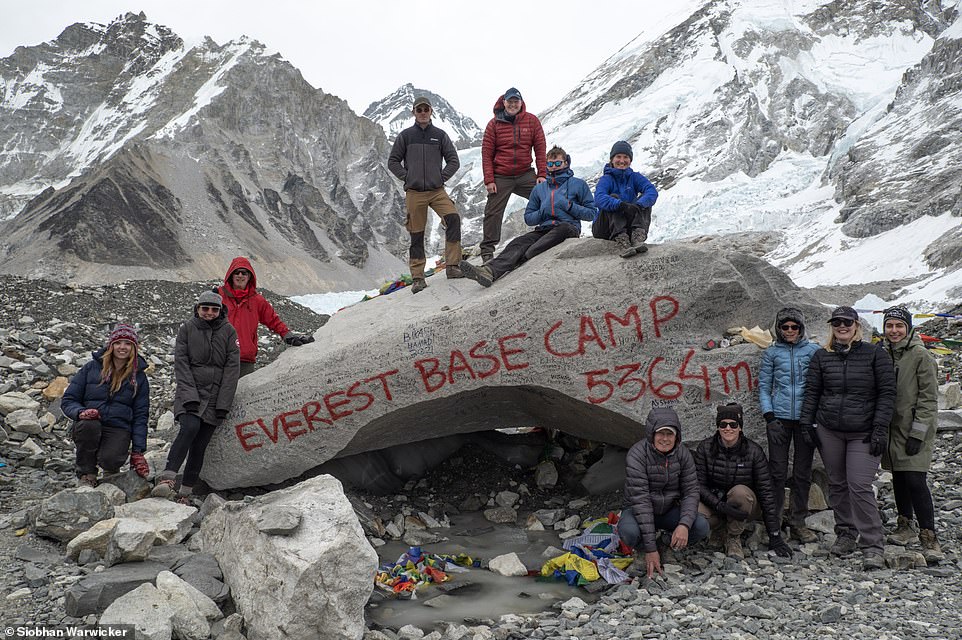 My fleece pockets were bulging with electrics – head torch, camera batteries, phone – and I was propping up a leaking water bottle in the crook of my elbow. Anything you don’t want to freeze overnight at 5,000 metres (16,404ft), you’d better radiate with your body warmth. Darkfall had brought a temperature of minus nine Celsius, and that was indoors.

I pushed my Sherpa hat above my eyes as the 5am alarm bleeped, and wriggled out of my two duvets to begin the slow hike to Everest Base Camp. Slow, because the oxygen in the air was almost down to 50 per cent of that at sea level.

I and 12 other travellers from the West, ranging in age from 18 to 70, had been trekking for seven days with Canadian tour operator G Adventures. Despite cautious acclimatisation, this altitude was making every movement laboured.

Siobhan (far left, pictured with her group), describes Everest Base Camp (17,598ft) as being in ‘a barren field of rocks and rubble’ 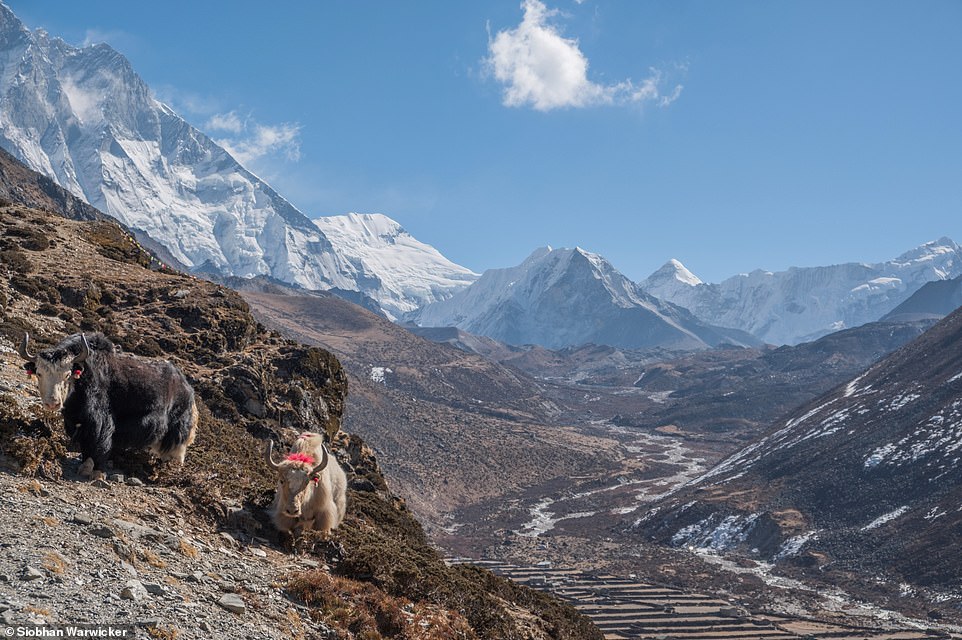 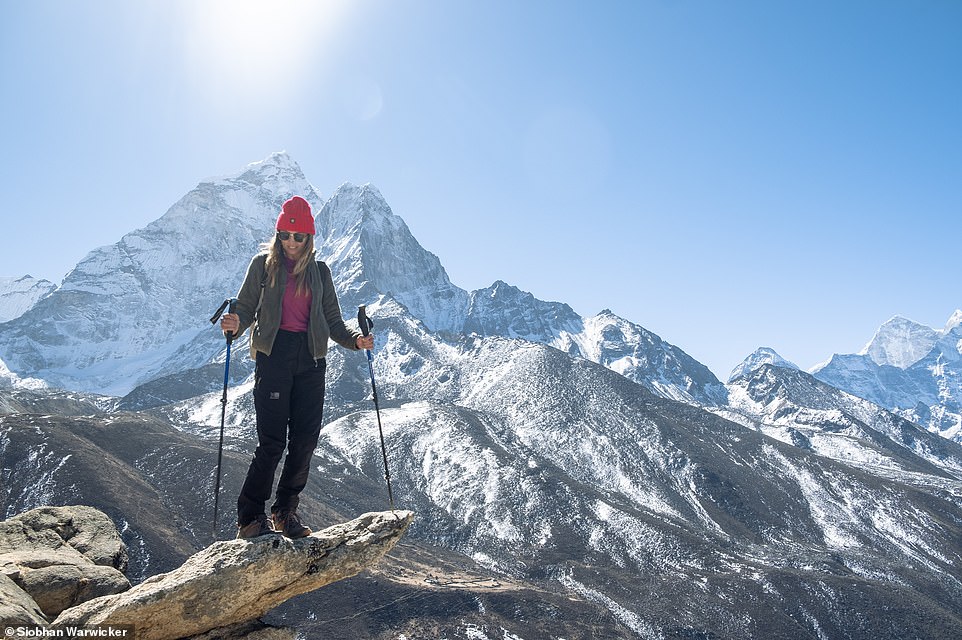 Siobhan is pictured here during an acclimatisation day-hike from Dingboche, with the 6,812m- (22,349ft) high Ama Dablam peak in the background. The image was taken two days before she reached Everest Base Camp 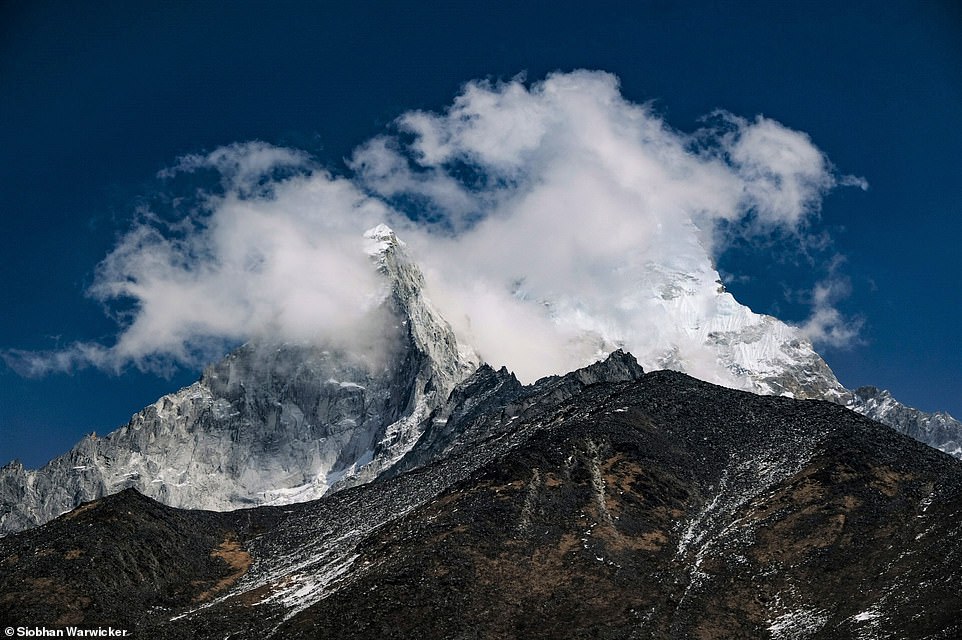 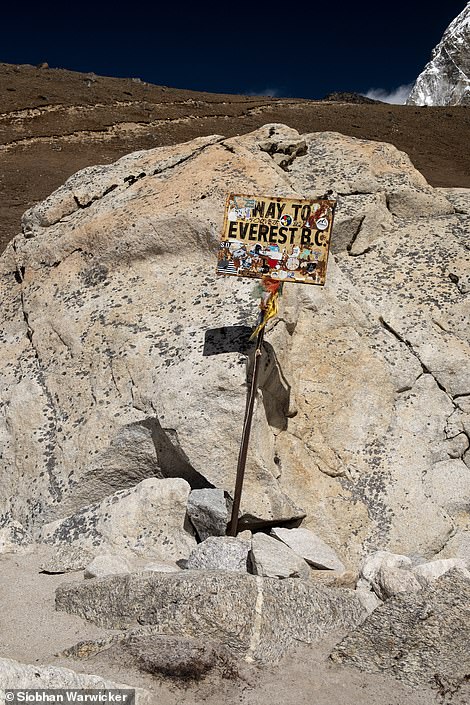 Gorakshep (5,146m/16,883ft) is the last settlement before Base Camp, and after lunch there on the day of their Base Camp push, Siobhan’s group crossed a mile of desert-like white dust, then followed this battered ‘Way to Everest B.C.’ sign up the valley

The trail so far had snaked through valleys that turned from blue pine forests and whitewater gorges, to golden plains circled by griffon vultures, and finally this alien land where miles of pale grey rock are guarded icy giants. The villages here are in such extreme locations that the route was also a delivery chain of terrain-skimming helicopters and convoys of shaggy yaks.

Perhaps because of a post-pandemic drive to embark on bucket-list experiences, G Adventure’s Everest Base Camp trek is gaining renewed popularity among British travellers. Two weeks and 130km (80 miles) through Himalayan Nepal. Nature’s immense crowning glory. What could be more bucket-list than that?

Our journey had started on a Yeti Airlines plane to the ‘world’s most dangerous airport’ in Lukla, with its minuscule runway in between mountains, at 2,850 metres (9,350ft). An elderly Sherpa woman behind me chanted the Buddhist prayer, Om Mani Padme Hum, throughout the 30-minute flight from Kathmandu.

It was my first glimpse at the Sherpa ethnic group’s spiritual connection to this land: the Solukhumbu District, which borders Tibet. The heart of Sherpa heritage, their culture of Tibetan Buddhism defines the characteristics of this trek as much as the mountains themselves.

Prayer flags stream from any place where Sherpas wish for goodwill to be carried into the wind. Our guides made sure we walked clockwise around the Buddhist chortens we passed, an act said to purify negative karma.

G Adventures put cheerful veteran guide Gelu Sherpa at the helm. With the group’s varying walking speeds, he supported from the back, while assistant guide Dawa Sherpa glided along up front, choosing viewpoints for stops and rounding us up with a jam jam – ‘let’s go’ in Nepali. 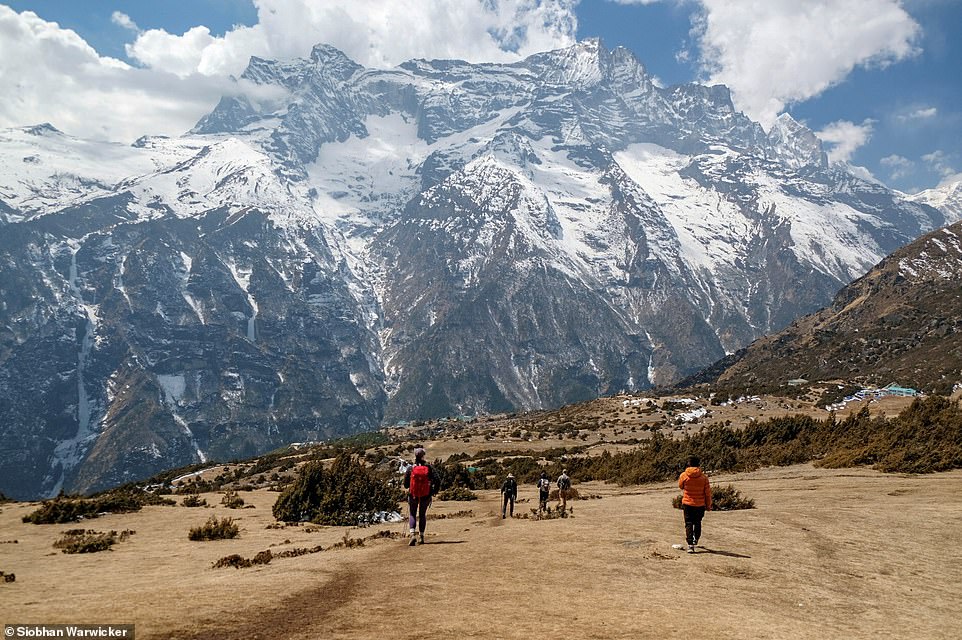 A stunning picture of Siobhan’s group during their first acclimatisation day-hike, walking down to the town of Namche Bazaar (3,440m/11,286ft) from just above Syangboche – the ‘world’s highest airport’ – at an elevation of 3,860 metres (12,664ft). Filling much of the frame is the mighty Kongde Ridge 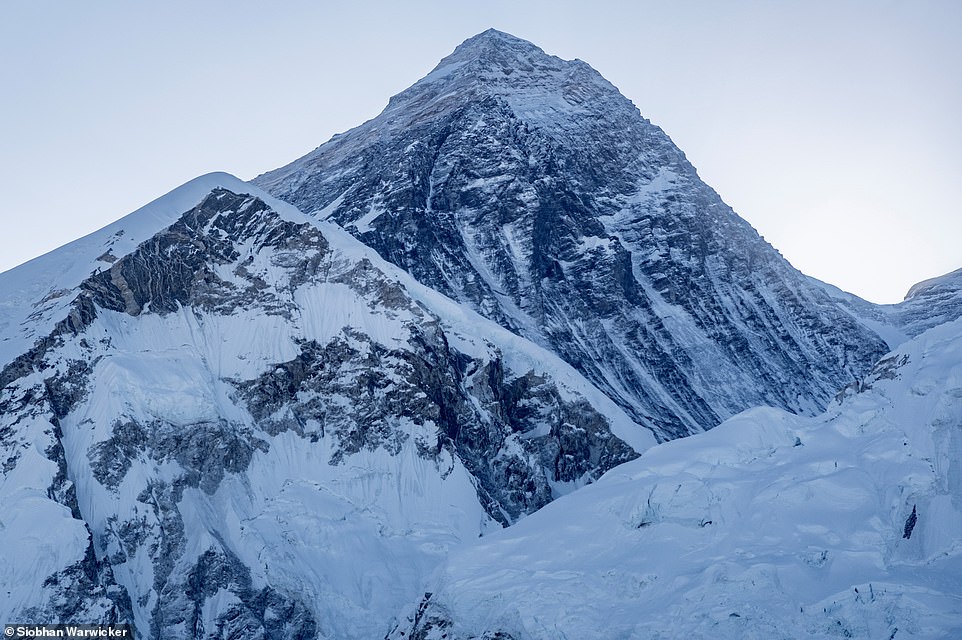 The best view of Everest on the hike, explains Siobhan, is during a side-trek to the top of Kala Patthar – and it was during this expedition that she took this mesmerising picture of the world’s highest peak 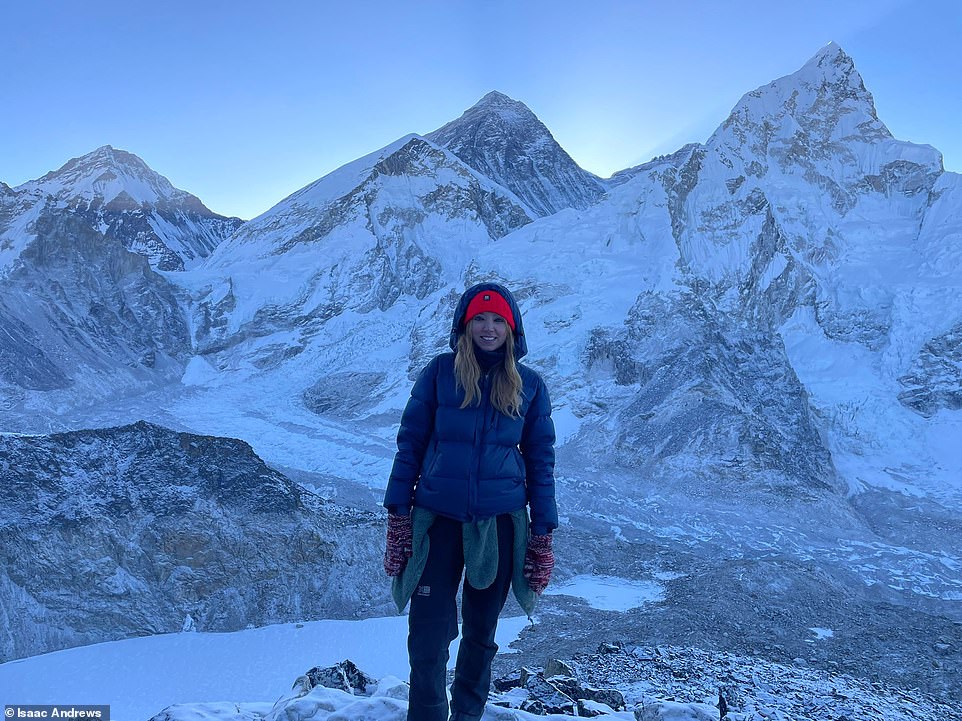 Siobhan is pictured here in her yak-wool mittens on the Kala Patthar trek, which tops out at 5,646m (18,523ft). Everest is the central peak 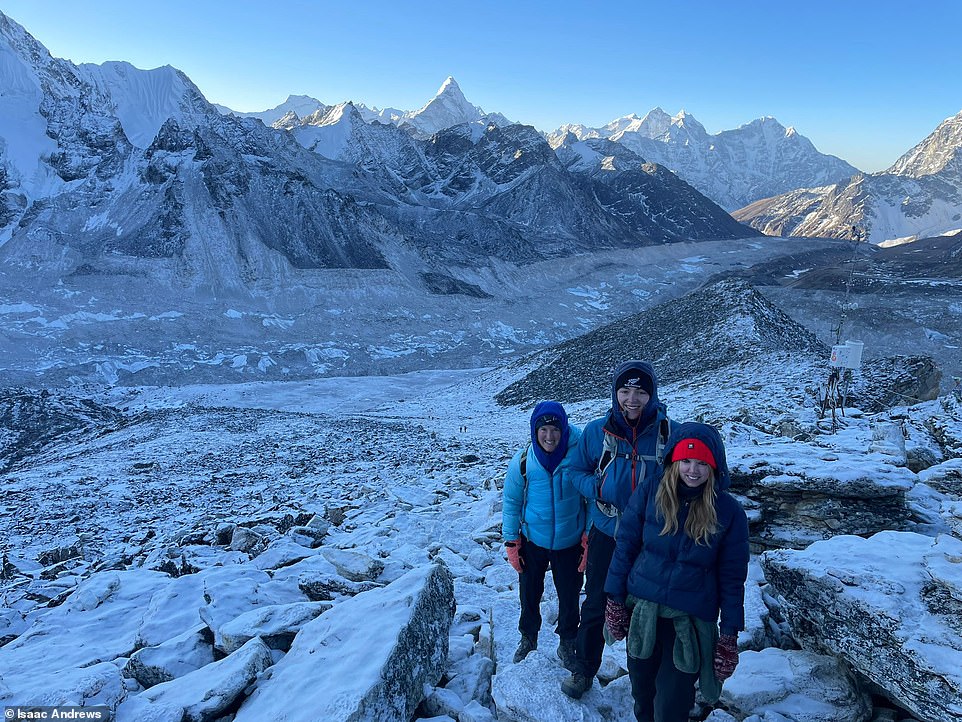 Siobhan during her hike over snow-dusted boulders to the summit of Kala Patthar, a landmark that despite its altitude is not officially recognised as a mountain 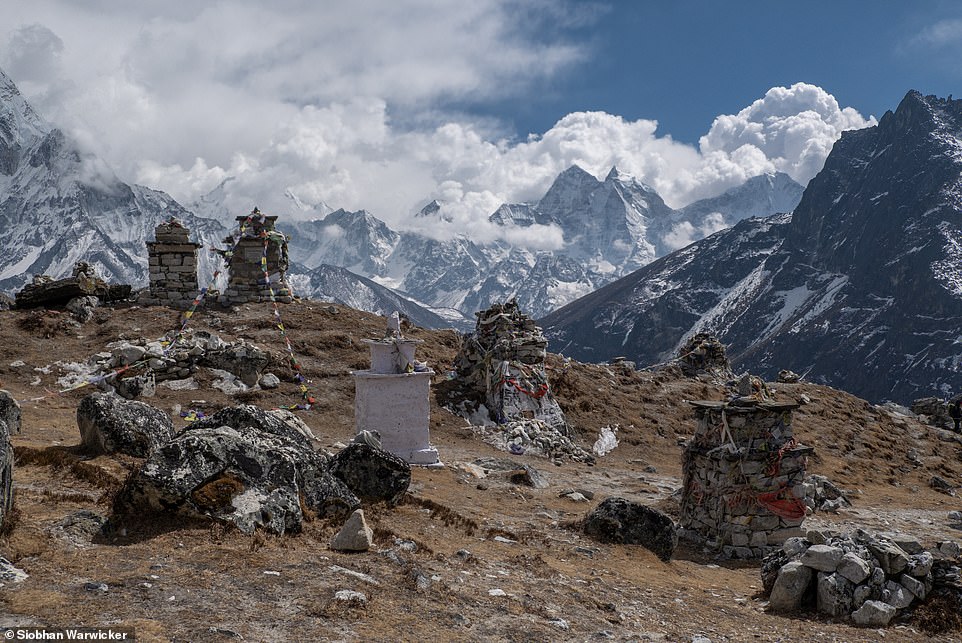 The day before reaching Everest Base Camp, Siobhan’s group passed the climbers’ memorial at 4,825m (15,830ft), above the small settlement of Dughla. Those remembered here include Scott Fischer and Rob Hall, mountain guides killed in the 1996 Everest disaster, depicted in the book Into Thin Air and the film Everest 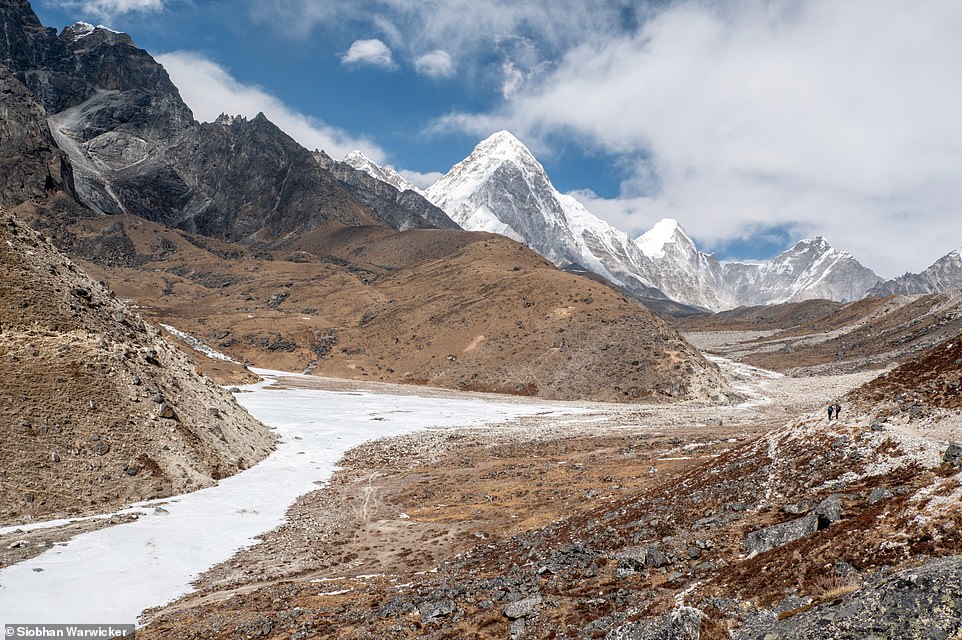 A spellbinding picture of the Pheriche-Dhugla trail above the Khumbu Glacier, taken the day before Base Camp was reached. The tall central mountain is Pumori, which reaches a height of 7,161m/23,494ft and is directly above Kala Patthar

Everest is elusive on the approach, slipping in and out of sight, behind the matrix of weather and neighbouring sentinels, such as Lhotse, Nuptse and Ama Dablam. But we get a clear view at 3,900 metres (12,795ft), as part of the extraordinary backdrop to the Solukhumbu’s most renowned Buddhist sanctuary: Tengboche monastery.

Solukhumbu meditation is more spectacle than serenity. Chanting would crescendo, when an adolescent boy with mischievous dimples relished the honour to thrash a gong. Around 20 trekkers were folded up on the floor – all with the aim to empty our minds before continuing our journey, into the realm of thin air.

After lunch in Gorakshep on the day of our Base Camp push, we crossed a mile of desert-like white dust, then followed a battered ‘Way to Everest B.C.’ sign up the valley, to the edge of the Khumbu Icefall. This is the start of a vast stretch of menacing crevasses and seracs (towering blocks of ice), that’s known as Suicide Passage among those attempting an Everest summit. 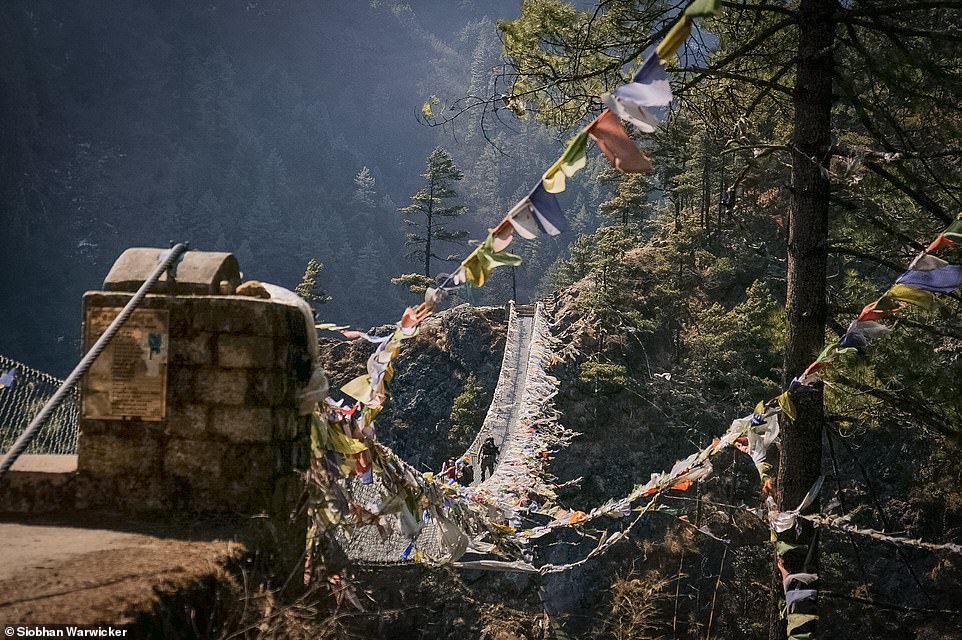 A jaw-dropping suspension bridge at a relatively low altitude. Siobhan eventually reached heights where the oxygen level was half of that found at sea level 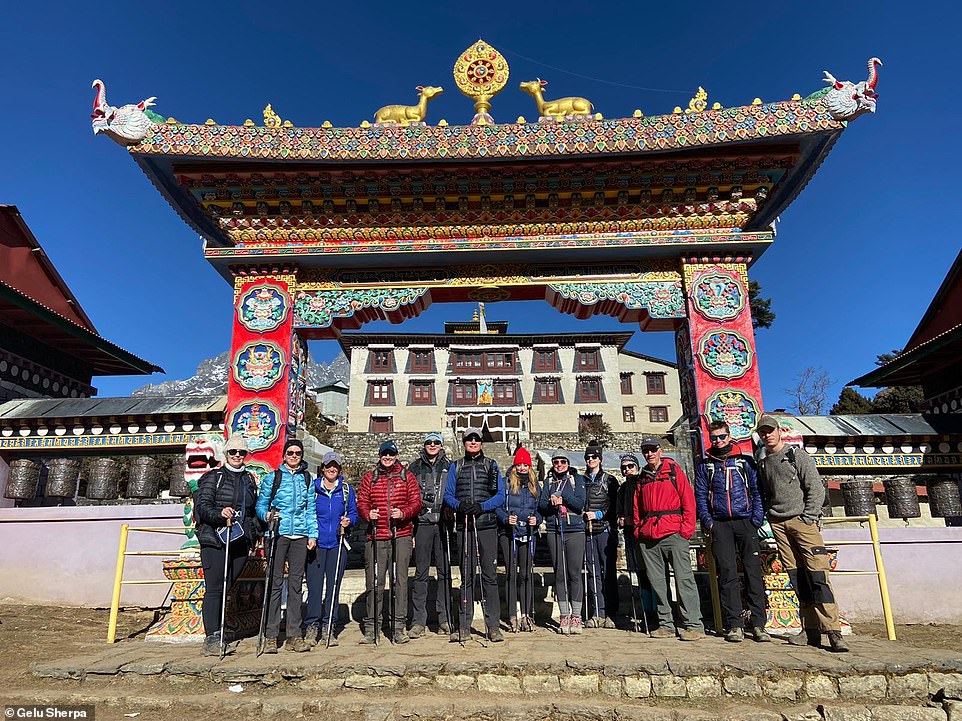 The trekking group at the renowned Buddhist sanctuary – Tengboche monastery, which sits at an elevation of 3,900 metres (12,795ft) 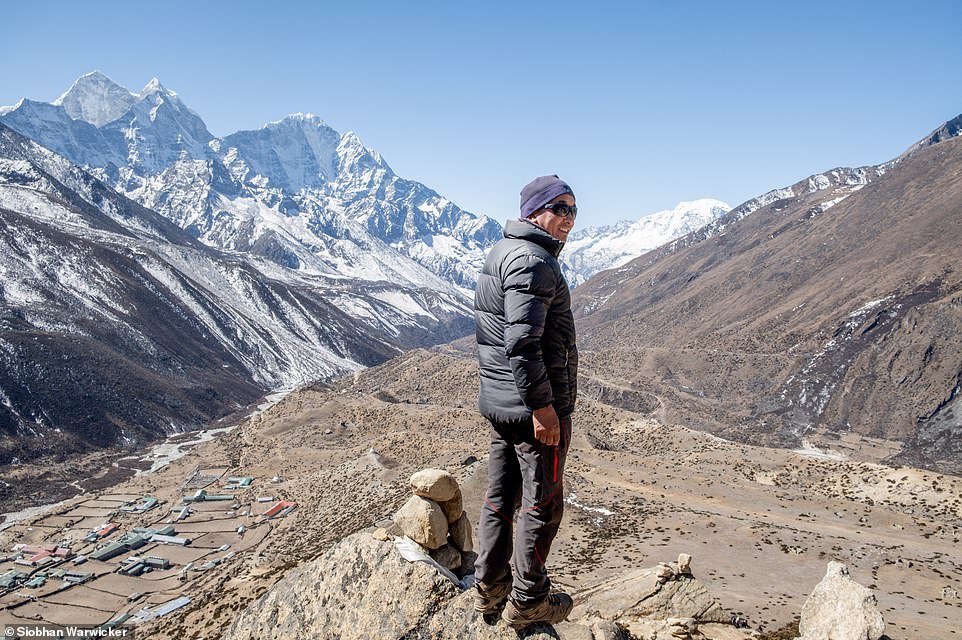 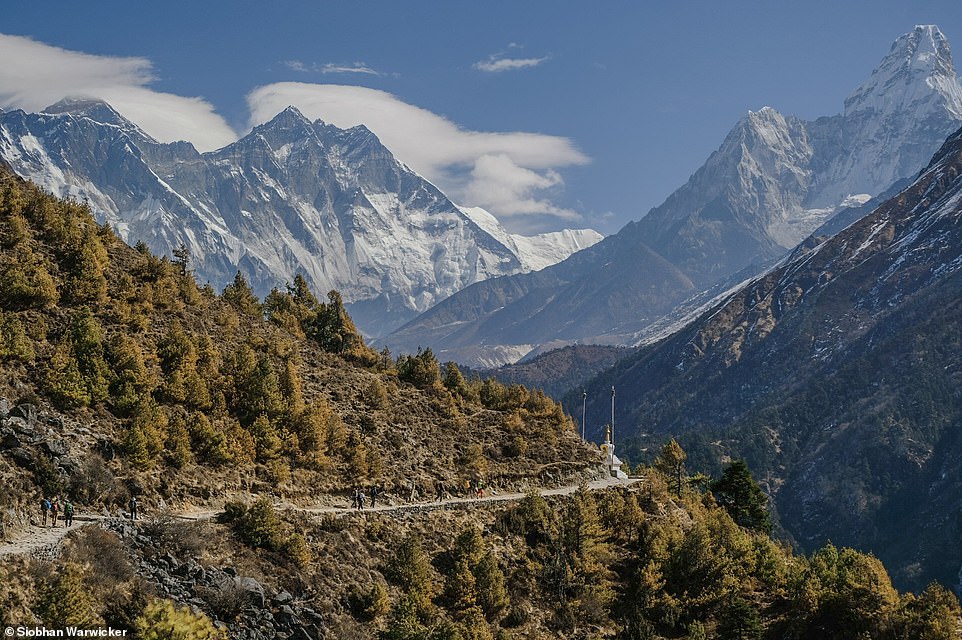 Pictured here is the trail from Namche Bazaar to the village of Tengboche (the site of the monastery), winding through the Dudh Koshi Valley. Everest is the first grey peak on the left  – it’s grey, not white, because the snow hasn’t been able to settle in fierce winds. The peak to its right is Lhotse (the world’s fourth-highest mountain at 8,516m/27,939ft) and on the far right is Ama Dablam

An hour later, we descended back down to the barren field of rocks and rubble that forms Base Camp, eerie in its off-season emptiness. Once climbers arrive, they spend weeks acclimatising in what becomes a city of tents. As we toasted with hot juice, I reflected on the powerful stories these mountains hold from generations of courageous folk who have stayed here. All their aspirations and preparations; tragedies and celebrations.

It had been billed as a challenge, and involved a second pre-dawn start, so only three of us took it on. Unfortunately for me, the other two were the fittest in the group. They embarked at a speed which I’d describe as ‘Sherpa pace’. 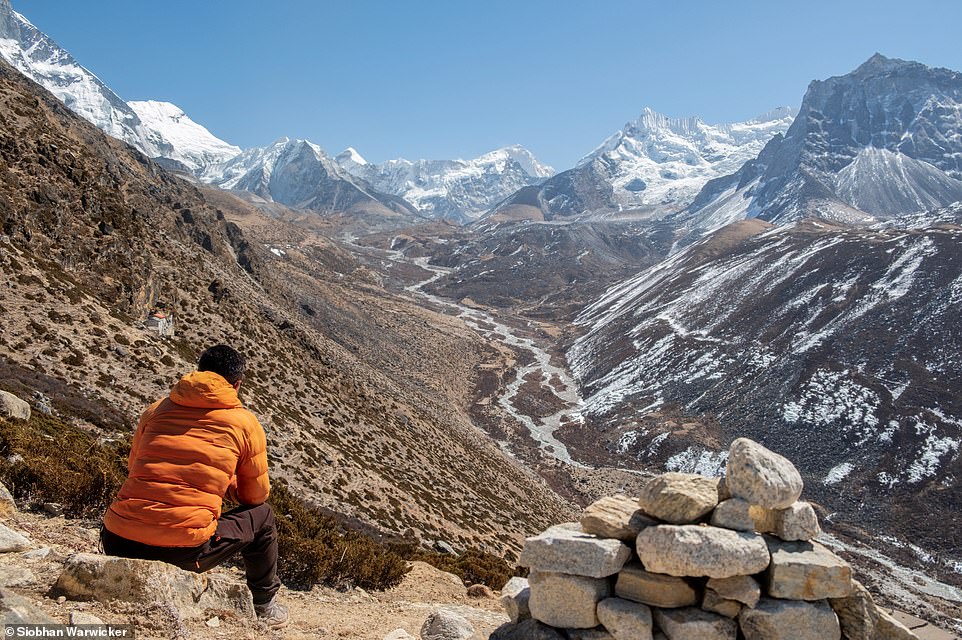 A stunning picture taken during the acclimatisation hike to Nagarzhang Peak from Dingboche. The man in the orange jacket is Pemba Sherpa, who was being trained as an assistant guide but mainly performed porter duties, Siobhan revealed, helping to carry the bulk of the group’s belongings each day. Siobhan said that the other porters – Big Pemba, Pasang, Birkha and Llakpa – were recruited by Gelu Sherpa from his village near Lukla 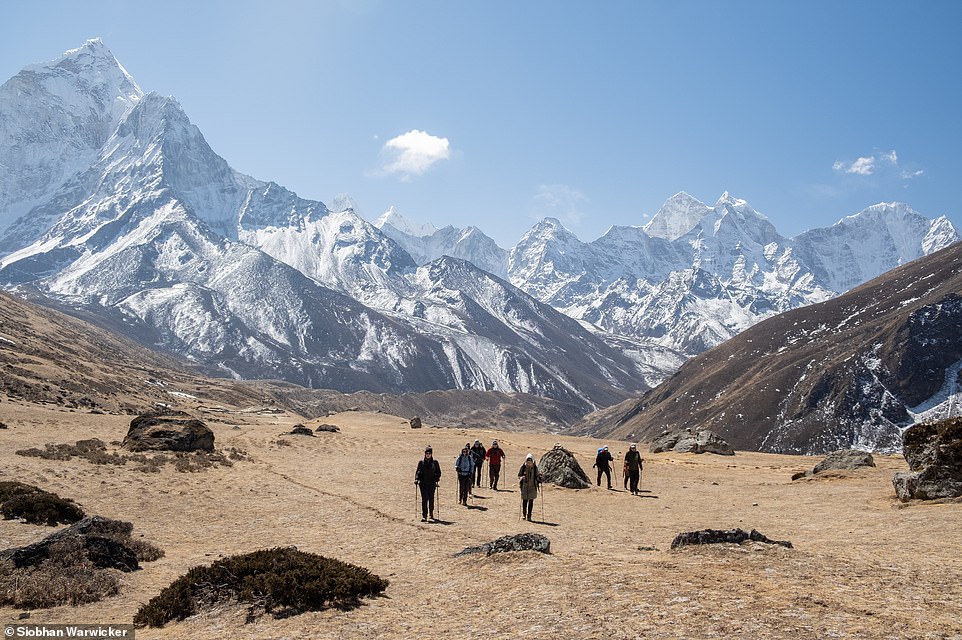 The trekking group is pictured here heading towards the memorial site, with Ama Dablam mountain on the far left 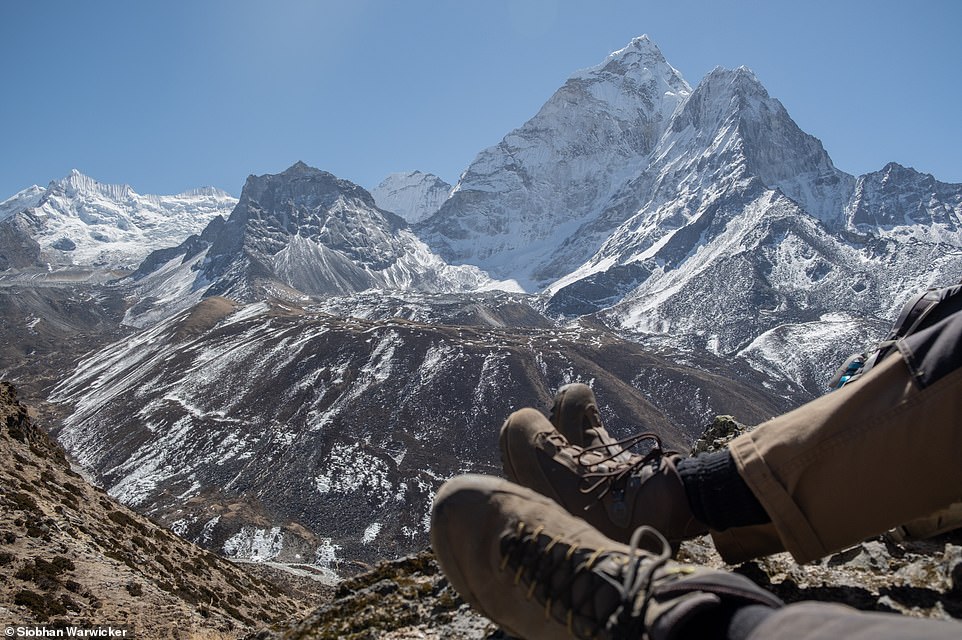 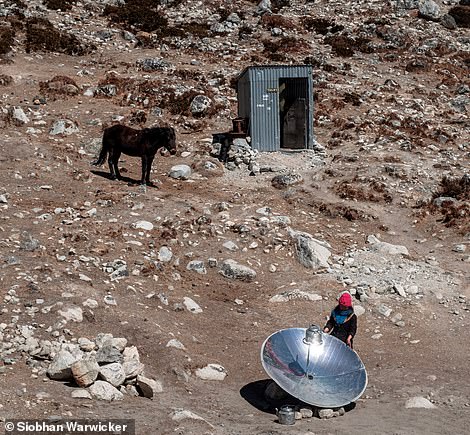 A woman adjusts a solar dish outside the Thukla Bakery Cafe, which sits at an altitude of 4,620 metres (15,157ft). Solar is the only power source for many Himalayan villages

‘Gelu, I’m too weak!’ I eventually admitted. ‘I’m going to sit on this rock and wait for you here,’. ‘Ok, but come up to this rock so I can see you better,’ he replied. When we got there, he said, ‘there’s a ridge over here, let’s go and look over’. Little by little, the trickery worked. Before I knew it, Gelu was leading me by my yak-wool mittens over the final snow-dusted boulders to the top.

Turning around gave me a sense of vertigo. The day’s first sun rays were spilling out from behind the top of the Earth. I could make out the South Col as the dip to the right of the 8,849-metre (29,032ft) summit.

Tibetans had been calling this peak Chomolungma, ‘Goddess Mother of the World’, long before it was named after an English surveyor in 1865. That morning, I could understand why she was regarded as divine.

With a sense of achievement, spirits were high in the days down to Lukla – we pelted words of encouragement at all the red-faced trekkers on their way up. Masala tea had never tasted as good as it did in the soothing sunshine. I devoured bowls of apple pie while warming my feet by the teahouse stoves. But my biggest delight was steaming shower water hitting my skin after 10 days without a wash.

Small pleasures had turned into enormous ones. That’s the higher reward for travel such as this. Although I did wonder whether it was the company of our Sherpa guides that sent a sprinkling of positive karma our way – carried in the wind from those sacred Solukhumbu peaks.