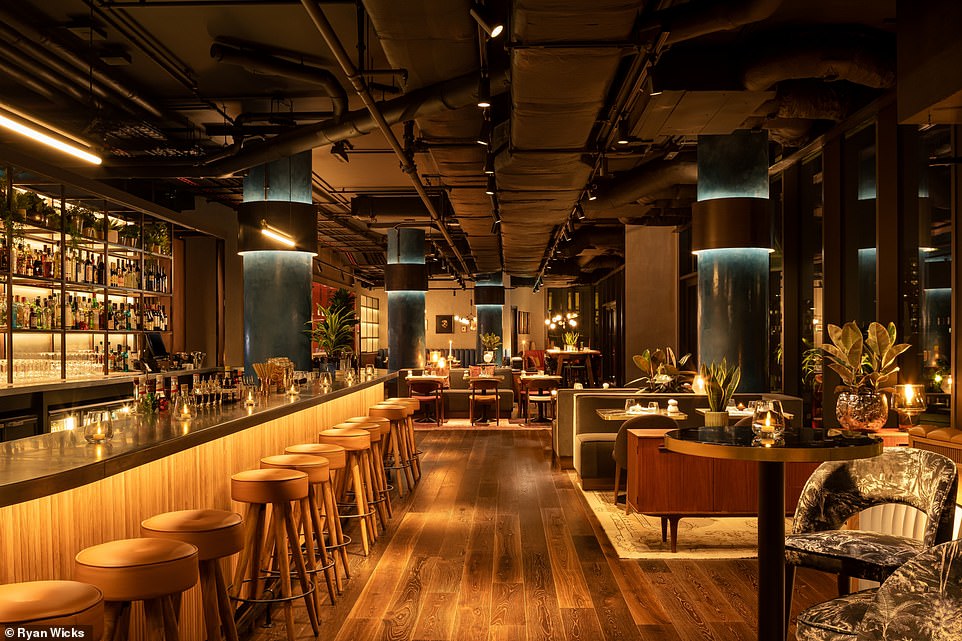 Southeastern’s Javelin service comprises train sets named after speedy sportsmen and women, including athletes Dame Kelly Holmes, Dame Jessica Ennis, and Dina Asher-Smith. I was travelling – swiftly – with my wife, Jude. We hopped on the Ed Clancy, named for the Yorkshire track cyclist who won gold at the 2012 Olympics.

Other trains to Stratford International – which continue at a blistering 140mph to Dover Priory – are named for Olympic cyclists Sir Chris Hoy and Victoria Pendleton. We couldn’t help noticing that the cycling theme continued at the Gantry hotel on Celebration Avenue.

Carlton Reid and his wife, Judith, checked into The Gantry hotel in Stratford, which opened last year. Pictured is the hotel’s Union Social restaurant on the first floor, where the couple enjoyed an evening meal 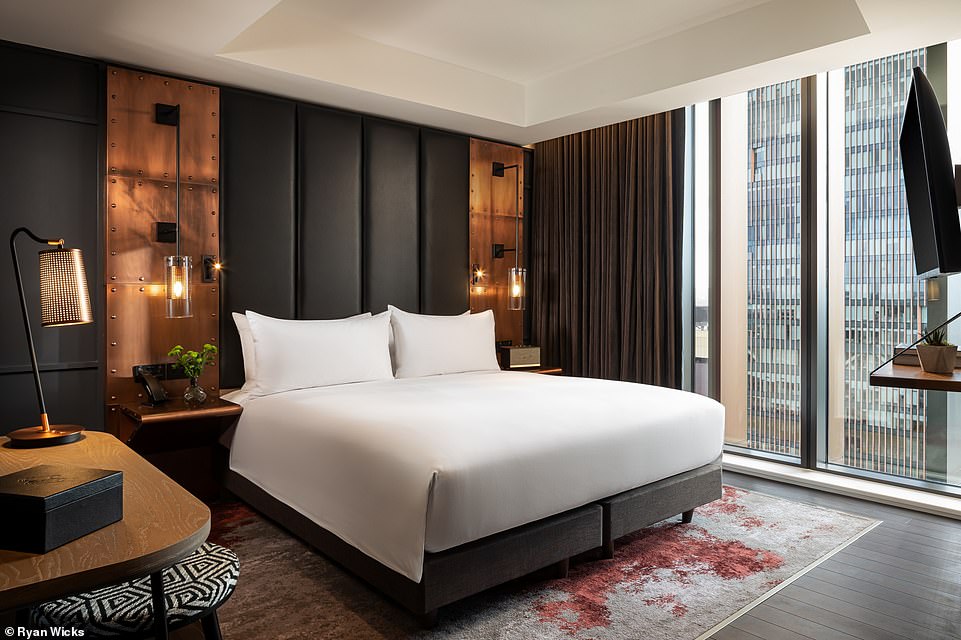 Carlton describes the room rate at The Gantry as being excellent value for London, with rates starting at £167 a night 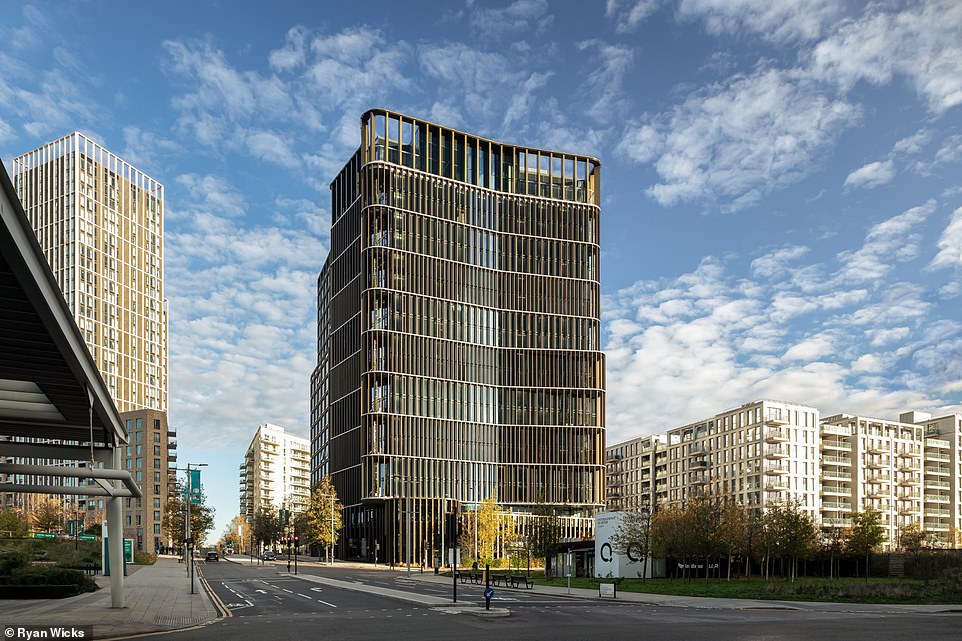 The new-build hotel rents out robust town bikes to guests, and we booked them immediately.

We were last in the area on a family trip to the London Olympics in 2012, where we watched hockey heats but wished we had entry to the events in the velodrome, among the hottest tickets at the Games.

We had no kids with us now, and the weather wasn’t quite as balmy as the 30C of July 2012, but pedalling around the Olympic Park, beneath the Olympic Rings and outside the Pringle-shaped velodrome, brought back many pleasant memories.

Today the velodrome is part of the Lee Valley VeloPark, and as well as racing and training inside the velodrome, there’s road bike racing on the serpentine exterior circuit. We stopped on a bridge to watch a peloton of riders whizz by below us. The riders were gone in a flash, so we carried on riding. 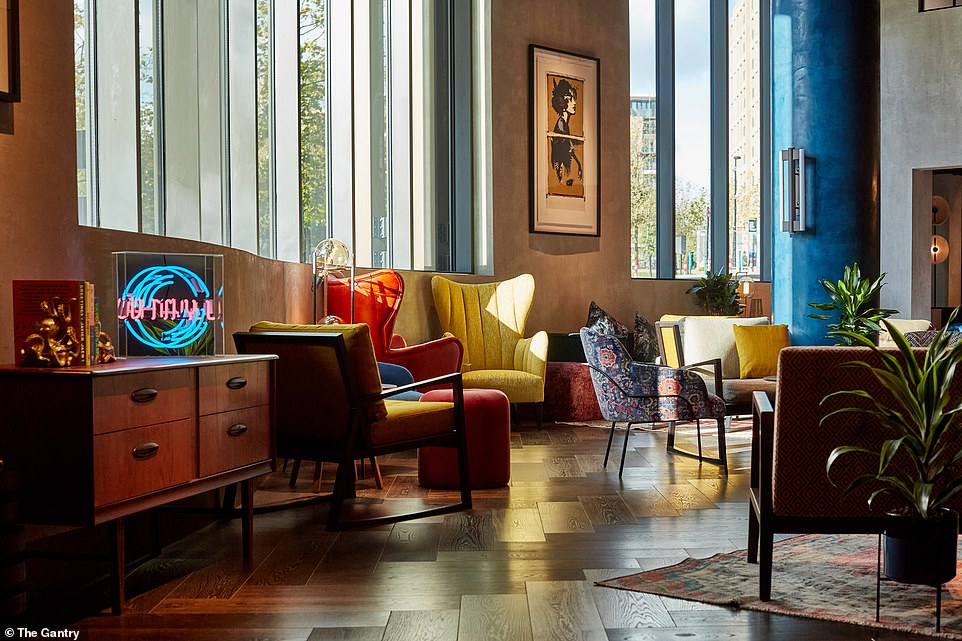 The foyer of the Gantry hotel is plush, with art books and colourful cushions 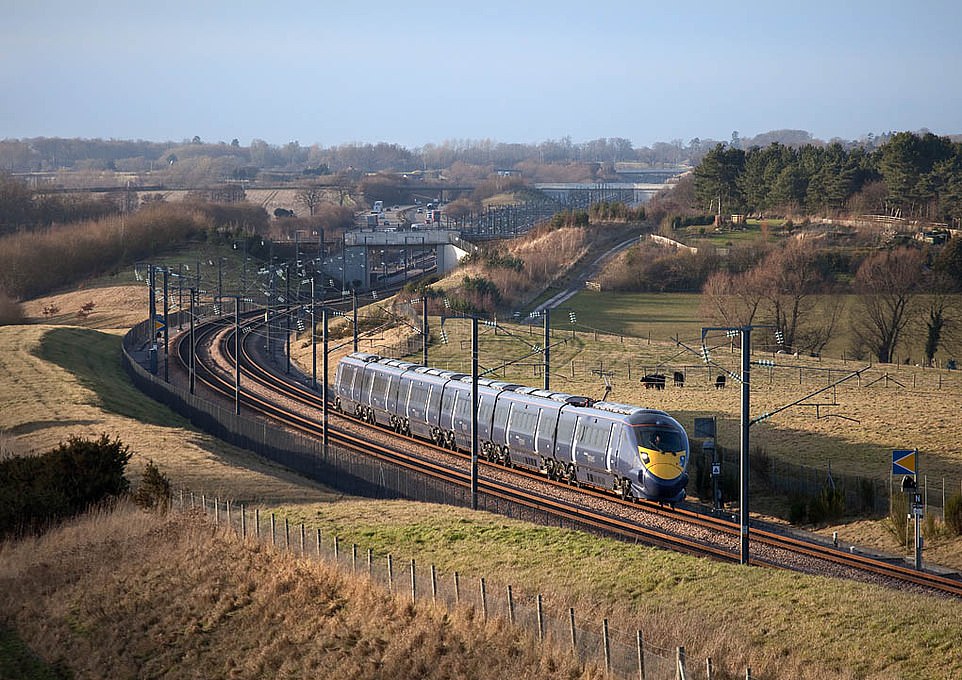 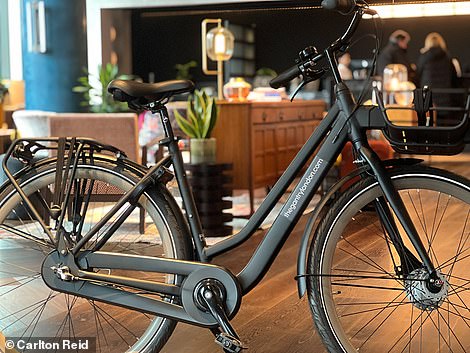 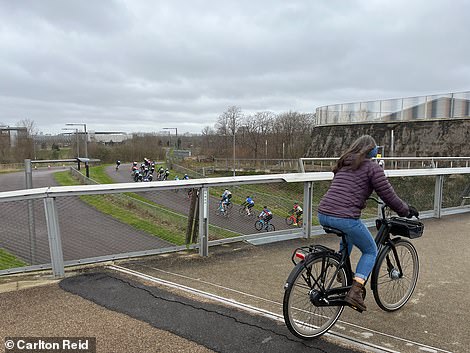 LEFT: The Gantry’s hotel rental bike in the hotel foyer. The bike is made by Gazelle of the Netherlands. RIGHT: Judith watching a peloton of racing cyclists whizzing below the velodrome bridge in the Olympic Park

At 560 acres, the Olympic Park is just as extensive as we remembered – we were glad to have wheels. We rolled past Peloton Avenue and down into the Waterglades, a wetlands area home to a variety of wildlife including bats, songbirds, and frogs.

The hotel’s Dutch bike, with mudguards, chunky lock and front basket, is a touch more expensive to rent than a Santander Cycles city bike, but it’s nippier and smarter (it’s made by Gazelle, the Raleigh of the Netherlands).

There are several Santander Cycles hire-bike stations close to the hotel, so even if the hotel’s bikes aren’t available, you can still get mobile for any jaunt around the park.

This is the East Village, which was the Olympic Athletes’ Village, home to 17,000 athletes in summer 2012.

Soon after the Olympics left the area (it was contaminated industrial wasteland in the 1990s) it remained lifeless but it has since gradually filled with tenants in the blocks where the athletes had briefly lived (their apartments had no kitchens – they had to be retrofitted later) and it’s now a blossoming part of London, filling out with independent shops, bars and restaurants. 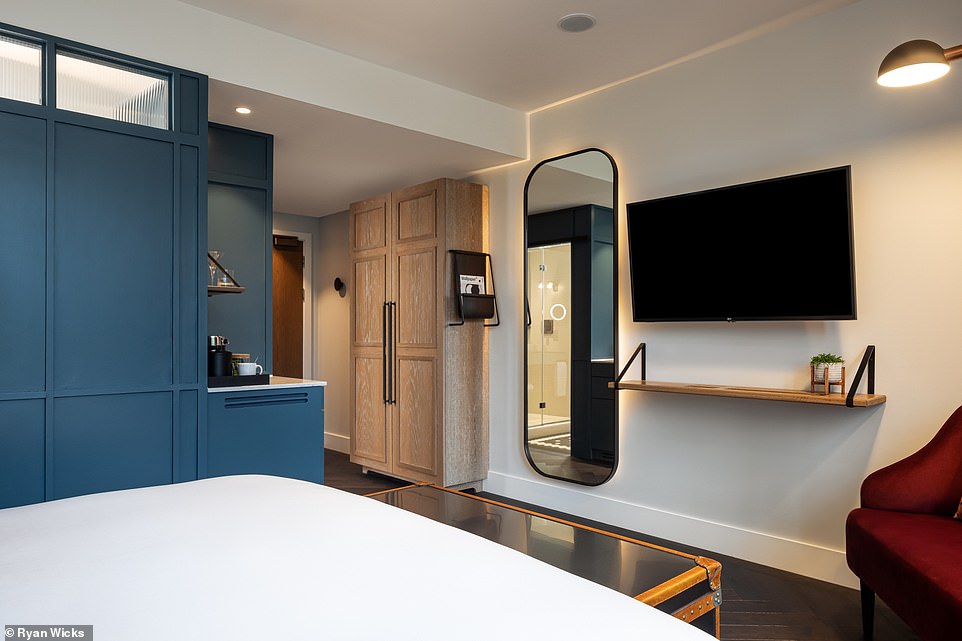 You can open your Gantry room door with a smartphone if you’ve got the Hilton Honors app, Carlton reveals 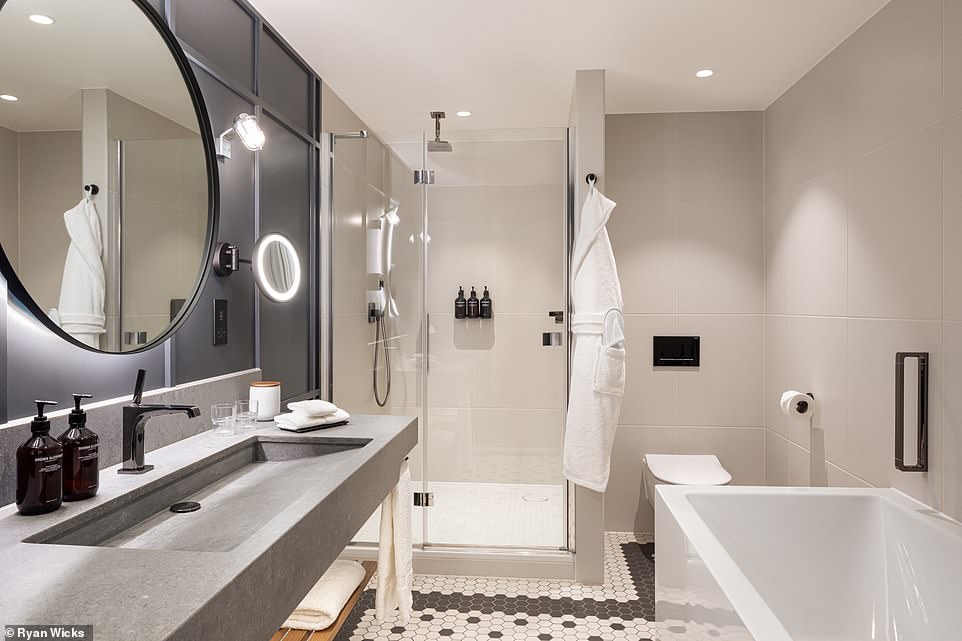 The bedrooms have sleek ensuites (above) and ‘real coat hangers,’ Carlton notes, ‘instead of those pesky nail-headed monstrosities that scream “we don’t trust you”‘ 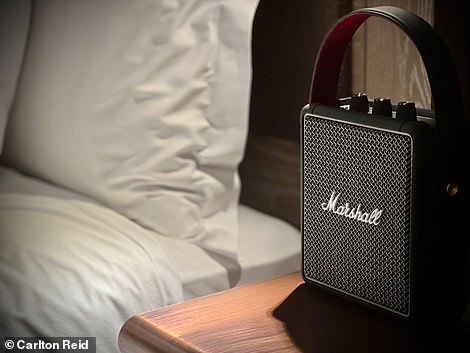 Of particular note – there’s a branch of La Gelatiera, home to London’s finest artisan gelato, near the hotel.

Belvedere Park, directly in front of the hotel, hosts many events throughout the year including, in September, the annual East Village Cheese & Beer Fest.

The Gantry opened last year, and some parts — such as the rooftop bar on the 18th floor — weren’t ready when we stayed in March. It’s a chic hotel yet excellent value for money — our room cost less than £200 a night — partly because it’s partnered with the Hilton group. You can even open your room door with a smartphone if you’ve got the Hilton Honors app.

In town to watch a West Ham game? The London Stadium is a short walk from the hotel.

Many of the Gantry’s 291 bedrooms have views over the Olympic Park. Ours did. And not quite so bucolic, there was also a view over to the adjacent Westfield Stratford City shopping mall.

The Olympic park views were best during the day, but even the shopping mall and the surrounding high-rises looked spectacular at night. Not Manhattan spectacular, but still impressive. (The rooftop bar is going to be a great addition.)

As well as binoculars for getting close-ups of the views, the room was also equipped with other thoughtful extras. There were real coat hangers instead of those pesky nail-headed monstrosities that scream ‘we don’t trust you’. There was a bin with a large recycling compartment and, by the bedside, a Marshall speaker that was easy to hook up to my iPhone via Bluetooth.

I couldn’t get the Nespresso machine to work even though I followed the video instructions to the letter. I was glad of the link to the instructions because you’re on your own in most hotels. The friendly front desk team promised me they’d sort it, and they did. 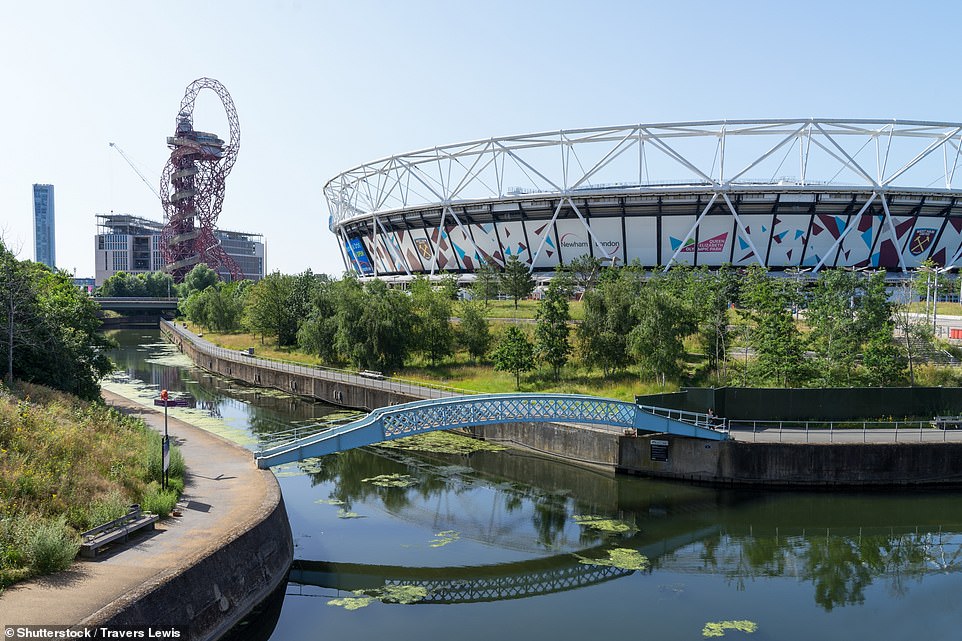 Many of The Gantry’s 291 bedrooms have views over the Olympic Park, pictured 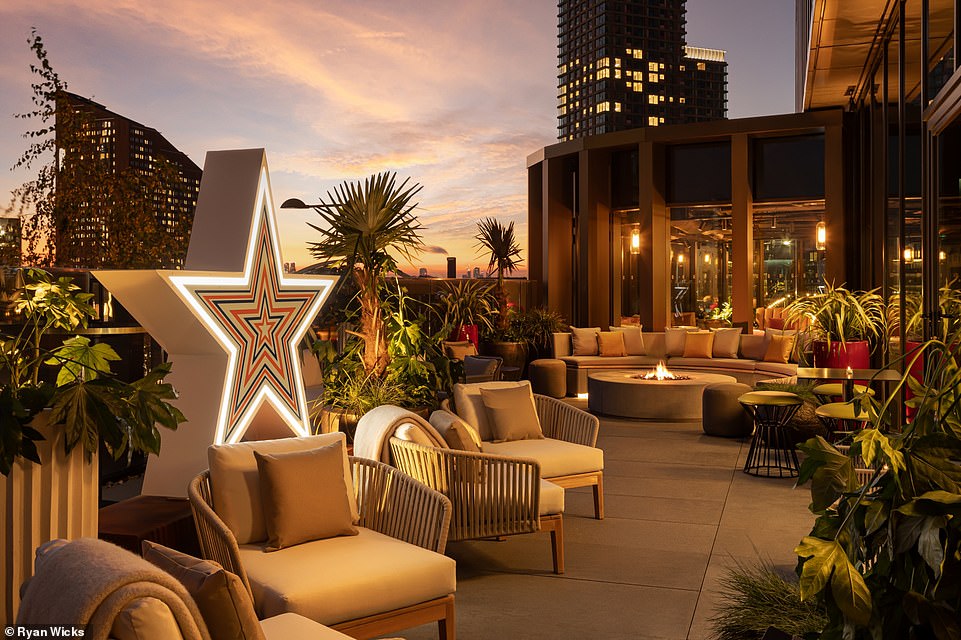 This rendering shows The Gantry’s 18th-floor rooftop bar, which will be opening later this year 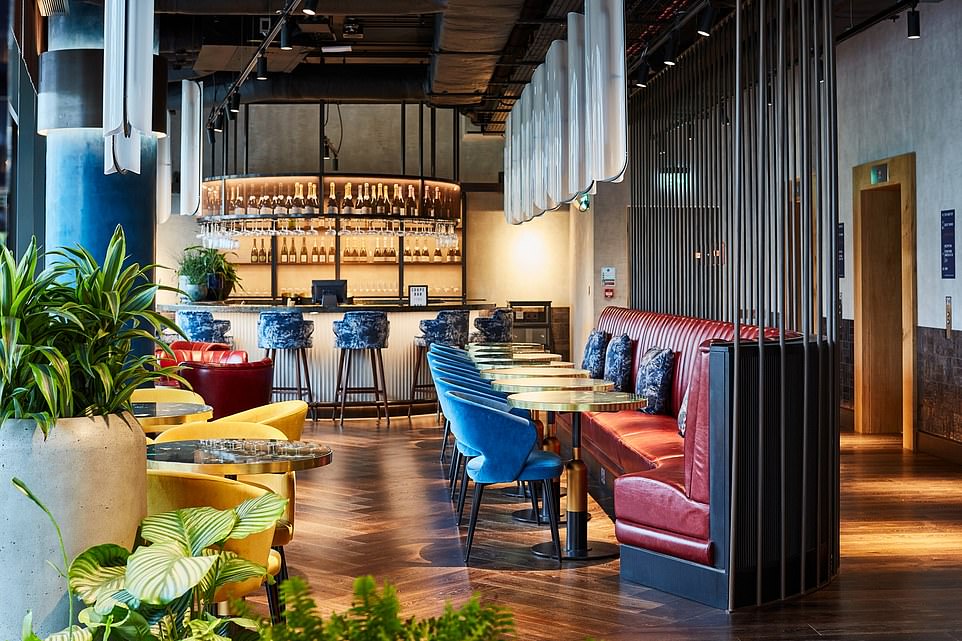 The Coupe ‘sparkling bar’, where Carlton and Judith had a cheeky glass of pink Champagne each 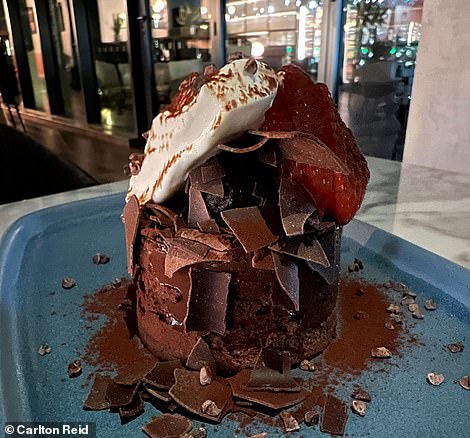 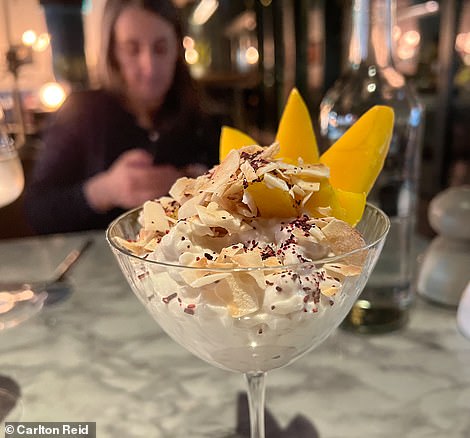 We had an evening meal in Union Social, the Gantry’s first-floor restaurant, starting with a cheeky glass of pink Champagne served from the Coupe bar.

The upscale restaurant has staples such as gourmet burgers — the Gantry’s meat patty sandwich is a ‘burgster’ — but we stuck with the health-kick theme and chose zesty salads packed with grains. I had a Panzanella. This is a Tuscan chopped salad of olive-oil-soaked stale bread, onions, and tomatoes. (I had to Google it beforehand.) Stale bread? Not quite. There were chunks of fresh sourdough along with Imperial Gaeta olives, cherry tomatoes, and a big blob of mozzarella. Delicious. Jude had minted white quinoa and Puy lentil salad with roasted butternut squash, crispy onion, and pomegranate kernels. Also delicious.

For dessert, I had a Thai Empress rice pudding, with toasted coconut flakes and fresh mango. Fragrant. Jude had a dark chocolate pudding with flake-away sides, Faversham-grown strawberries and creme fraiche. Health kick be damned.

The next morning, we took a quick look in the gym — it’s very well stocked, perfect for burning off puddings, but we had to leave.

We’ll be back, for the bike rides around the Olympic Park, of course, but also to sample the rooftop bar, the highest in East London. Why stay in cramped, expensive Central London when you’re just a swift train ride from the fresher air of expansive Stratford?

PROS: Superb value for money for London, chic and healthy dining, (soon to open) roof-top bar. Very friendly staff and, being a new build, everything in the hotel is fresh and shiny. This part of East London is clean and quiet, and with the Olympic Park on the hotel’s doorstep it’s a great location for (small) families. If Stratford or the former Olympic Park are where you want to be, The Gantry is ideally located with the ease of getting into central London a bonus.

CONS: Not a great location if you want the buzz of central London, and the high-speed train journey is pricey at just under £7 per single ticket. Tube fares are cheaper than high-speed rail but the journey extends from the blink of an eye to 20-plus minutes. No family rooms with even the £400 suites only sleeping three people.

The Gantry hotel is an independent design hotel that’s the fourth property within Hilton’s Curio Collection in London. It’s owned and operated by hotel management company RBH. As well as partnering with Hilton Hotels & Resorts the company also works with other international hotel brands such as IHG, Accor, Wyndham Worldwide and Marriott International. Curio Collection by Hilton is an upscale hotel brand within the Hilton Worldwide portfolio. Curio Collection properties — some owned by Hilton, others owned by independent operators — use Hilton’s reservation system and are part of Hilton Honors, Hilton’s guest-loyalty programme.