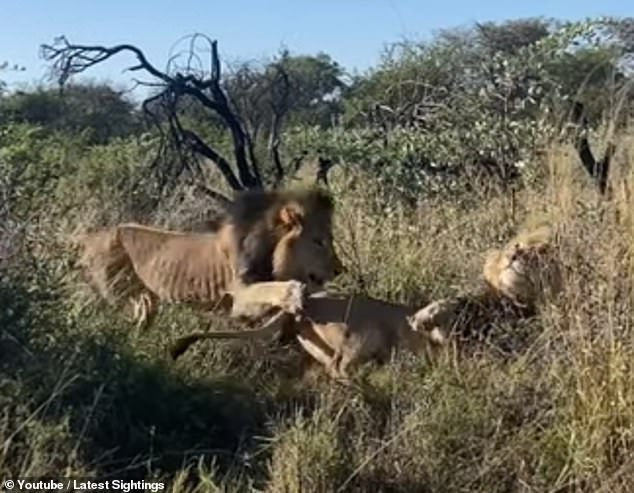 You ruined my big catnap! Moment lion pounces on sleeping rival and gets a ferocious reaction

Spectacular footage shows two male lions brawling after one of the duo crept up on the other as he slept in the sun.

Mr Blake, 20, said: ‘I had heard about the sighting [of the two lions] and made my way there.’

While driving to the area where the two lions had been seen, Mr Blake discovered he had a flat tyre and was forced to stop en route.

To his surprise, he realised the two big cats were now only feet away from him, so he started filming.

In the footage, one of the lions lazily dozes in the bush, as the other practises his stalking skills and slowly creeps up on him.

He pounces on his sleeping target who awakes with a start and grabs his attacker with in his claws and teeth.

The two animals brawl in the long grass, roaring, for a few seconds before squaring up and apparently ending their squabble. 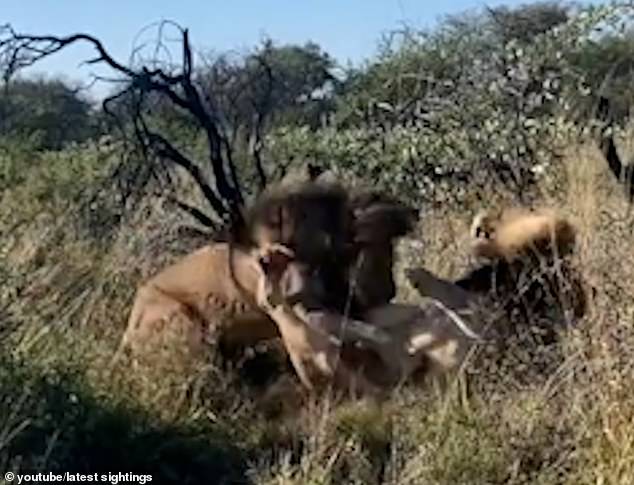 He said: ‘This truly was a once-in-lifetime sighting for me and just really goes to show everything happens for a reason.

‘Had it not been for the flat tyre, we would probably not have experienced this.’

Young male lions typically leave the prides they were born in at the age of three years old, when they become a threat to the dominant males.

At this stage, they often form coalitions with other young males when seeking to establish a new pride and to protect their offspring.

In many instances, male lions in a coalition will be brothers or cousins also cast out of the same pride, although this is not always the case.