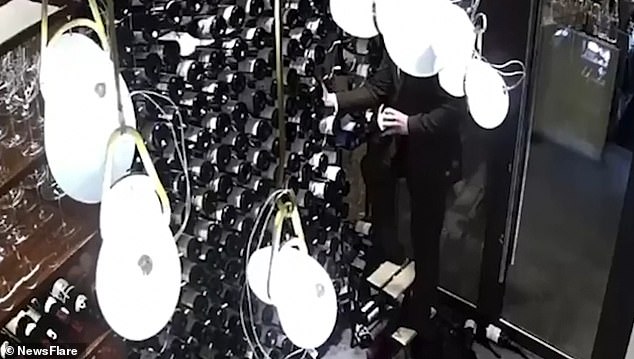 Chateauneuf du SPLAT! Moment ‘wall of wine’ worth thousands of pounds crashes to the floor when restaurant worker pulls out a bottle

This is the moment a huge ‘wall of wine’ smashed to the floor when a restaurant worker pulled out a bottle.

The footage was captured on a CCTV camera at restaurant Frou Frou in St Petersburg, Russia, on April 24.

The video shows the man pull out one of the scores of bottles from a suspended floor-to-ceiling wine rack. He checks the label before putting the bottle back.

This is the moment an entire wall of wine bottles collapsed at restaurant Frou Frou in St Petersburg, Russia, on April 24 as a worker selected one

However, the restaurant worker nudges the bottle above and the ropes supporting the bottles start to wobble, sending some cascading onto the floor.

Initially he seems to steady the bottles and stop any more falling.

However, when a colleague comes to help him hold them back, there seems to a  chain reaction and virtually all the remaining bottles smash to the ground.

The cost of damage is not yet known, but reports estimated it at around a million rubles (£11,181). 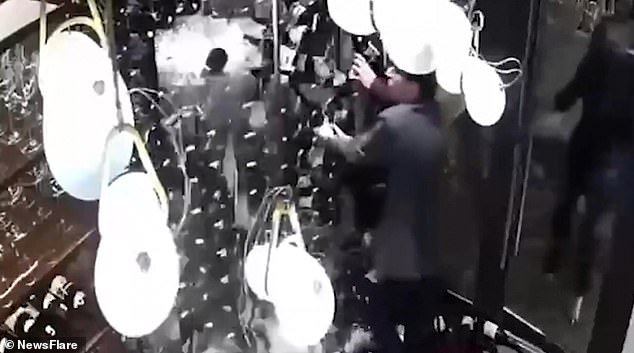 The video shows the man pull a bottle out of the rack and review the label before placing it back into the wall. However, he nudges the bottle above, causing the column to cascade 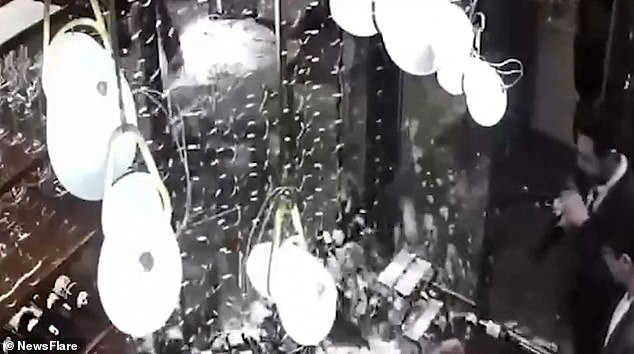 Workers survey the damage which has been estimated at around one million rubles (£11,181)

The employee involved in the expensive mishap has not been fired because the incident was not deemed to have been his fault.

Initial reports suggested the wine wall was prone to collapse due to unspecified miscalculations by the wine room manufacturers, and they could face a claim.

Moment skydiver solves Rubik’s pyramid puzzle during 13,000ft freefall in Thailand [Video]
My life as a visually impaired travel writer and the case for everything being a bit bigger, please
Advertisement