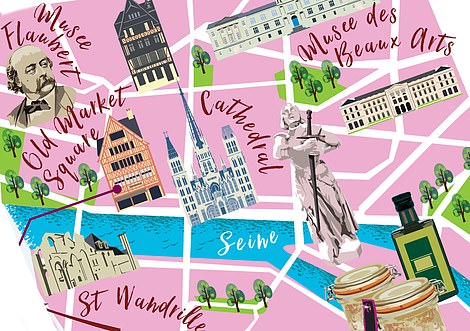 Explore the historic French city of Rouen on a budget

Flaubert’s Madame Bovary and Joan of Arc may both have met dramatic ends after visits to Rouen, but Monet adored painting the cathedral and Gauguin, Pissarro et al congregated here — hence the French city’s array of Impressionist art.

There are great-value restaurants and an easy rail connection to Paris.

There are few more delightful spots in town than the small breakfast terrace at this half-timbered old-timer. 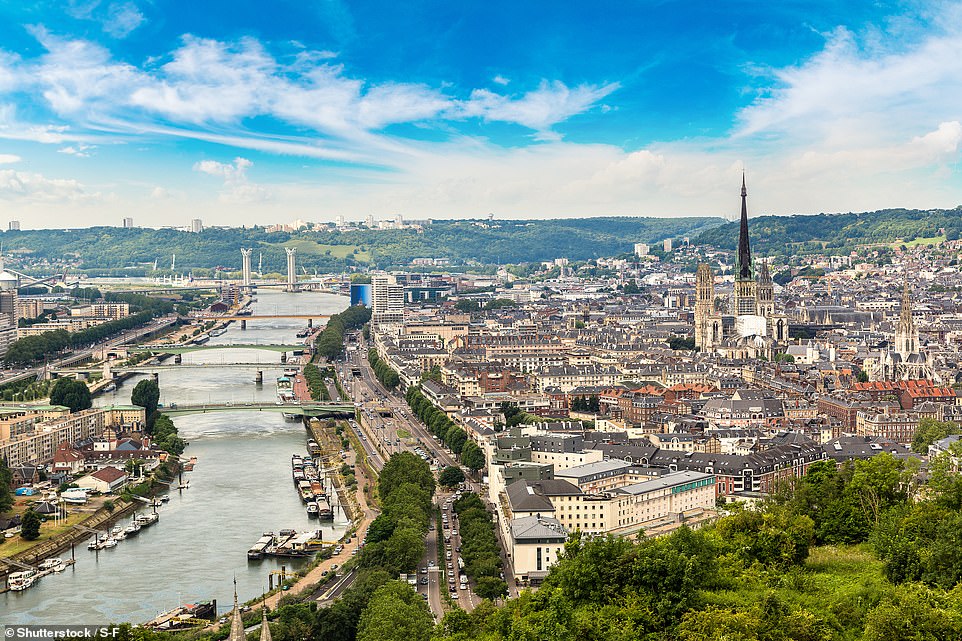 There are only 13 rooms, with brightly painted walls and all manner of quirky decorations, from Egyptian lamps to Moorish-style tables.

Ask for a third-floor room if you want a view of the cathedral. 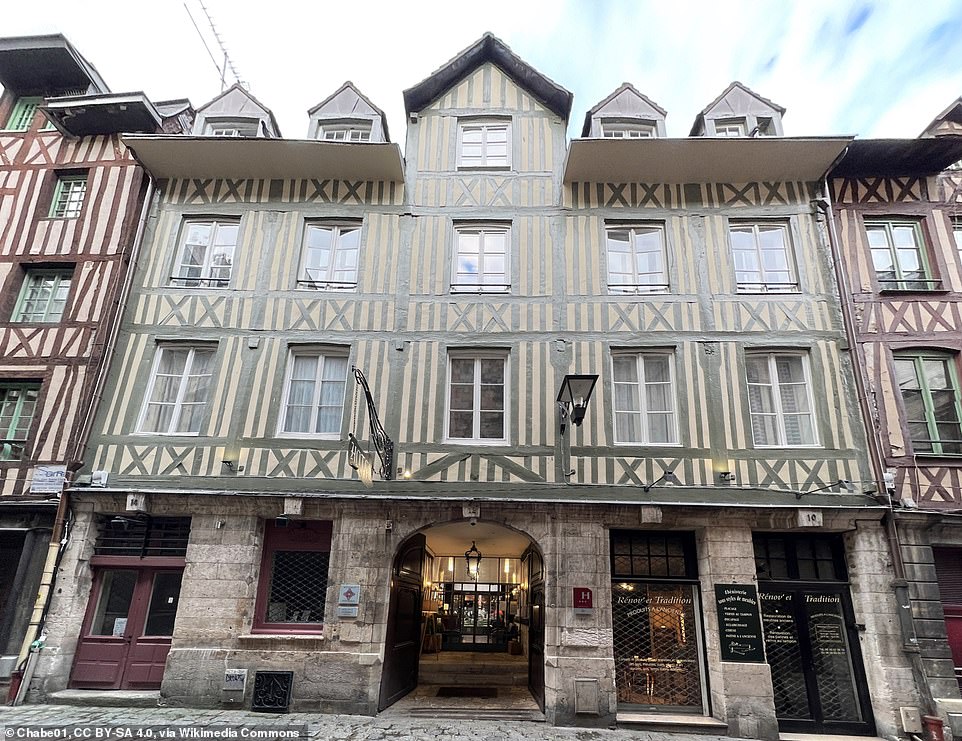 Tucked away down a minuscule side street next to the cathedral, this ancient inn was once a favoured getaway of Jean-Paul Sartre and Simone de Beauvoir.

You can see why: the rickety boho vibe is just right. Take room 24 for the true artist’s garret experience (with views of the cathedral steeple) and expect a warm welcome from Tigrou, the impressively corpulent hotel cat.

Every one of the 15 rooms in this small hotel on a pedestrianised street has a view of Rouen’s Gothic cathedral, which is about 12 paces from the front door. The modish purple-and-white colour scheme lends a slightly Scandi air of brisk efficiency to the place. 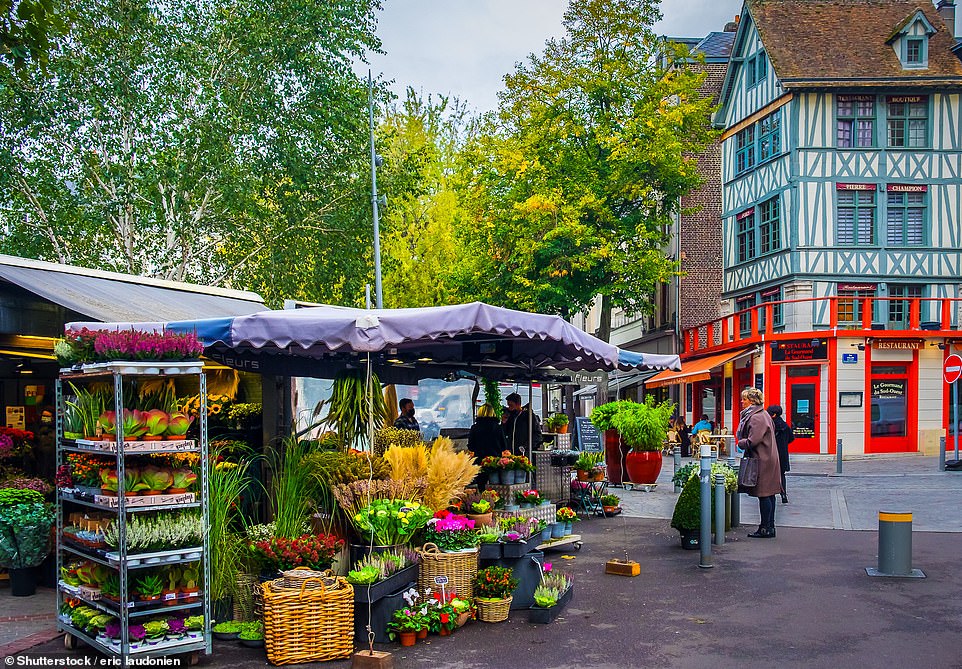 Check in to the bijou Hotel Dandy, which lies just a stone’s throw from the Old Market Square (pictured)

This bijou spot is in a cracker of a location, just a stone’s throw from the Old Market Square. The hotel’s claim that it is decorated ‘in an 18th-century style’ is stretching it a bit, but the standard rooms are spacious with pale wood floors, antique writing desks and some lovely views from the upper levels.

How do they do it? Four courses plus a coffee for £17 every night except Sunday. Young locals pack out this unassuming bistro, not just for the scarcely believable prices but for some outstanding local cuisine, such as fillet of cod with Dieppoise sauce and a feather-light croustillant (crisp pastry) stuffed with brie.

With ten choices for both starters and mains, you’d be hard-pushed to find better food at these prices in all of France. It’s located at 1 Rue des Boucheries Saint-Ouen. 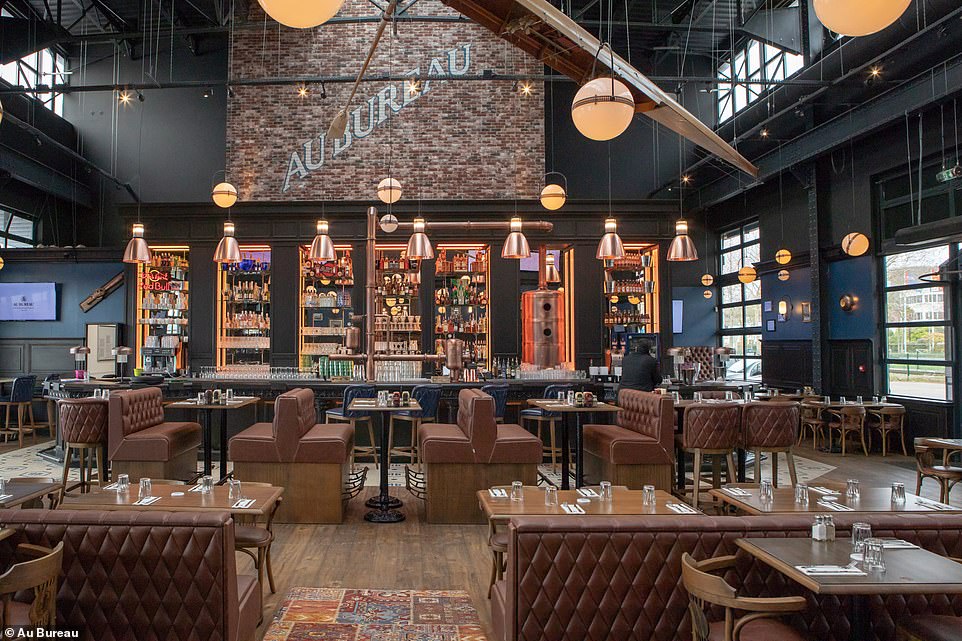 Feast on French-American comfort food in Au Bureau, an old shipping warehouse that has been turned into a hugely popular eatery 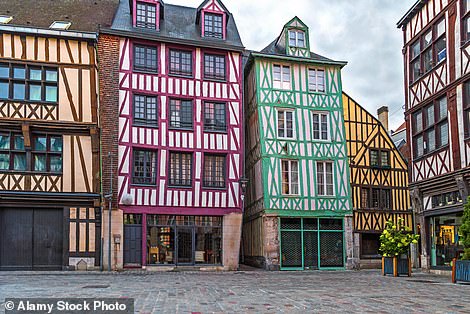 Colourful buildings in Rouen. Visit the city via an easy rail connection to Paris

Down on the banks of the Seine, this old shipping warehouse is now a hugely popular space that has French-American comfort food down to a tee. The portions are truly gargantuan, so be prepared for a serious afternoon carb crash if you attempt one of the ‘Les Croques’ filled to bursting with either Cajun chicken (£11.50) and ricotta or pastrami, pickles and gratin au fromage (£12.20) (aubureau-rouen.fr).

The 1980s pop culture boom has been fully adopted here. Home-style dishes are served up in a space where the walls are a vast montage of Transformers and Back To The Future ephemera.

But even if the decor isn’t your bag, the food is still worth coming for — try the £12.15 lunchtime two-course set menu, featuring retro classics such as the daily changing ‘butcher’s cut’ with fries and salad, followed by tiramisu (lesfilsamaman.com/rouen). 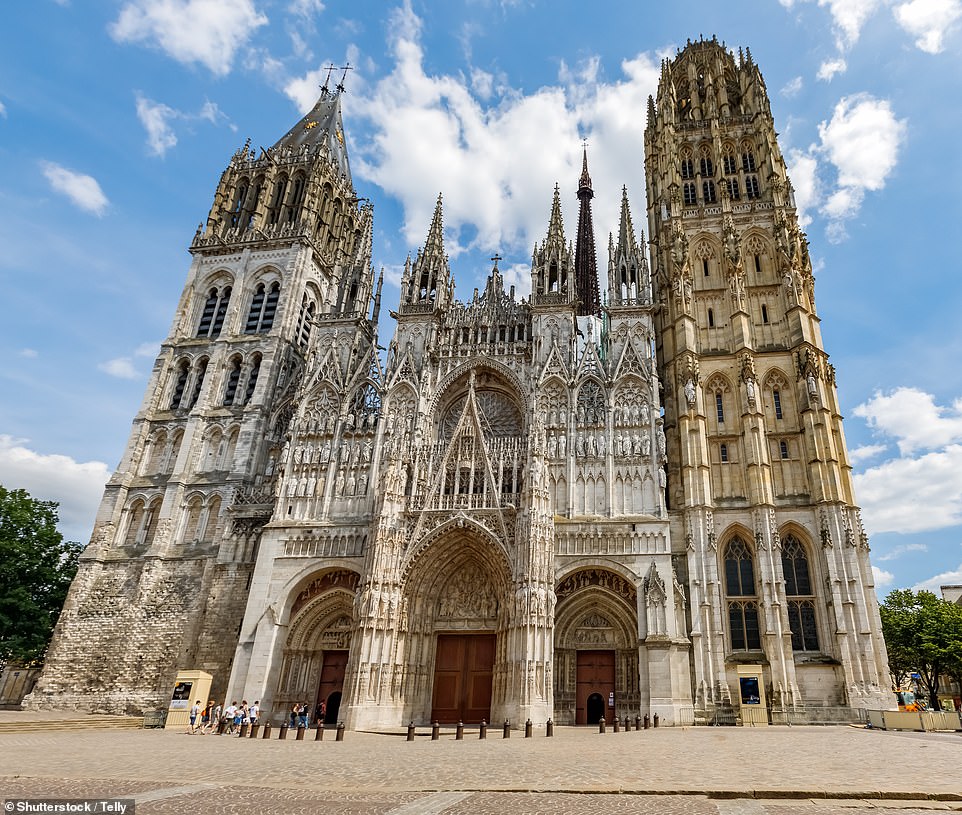 Just £15 will get you a three-course meal at Gout Boutique a Manger, a chic and contemporary spot near Rouen Cathedral (pictured)

Substantially more chic and contemporary than most spots surrounding the cathedral, Gout (meaning ‘taste’) offers a knockout set of lunch options — a mere £15 gets you a three-course meal which could include cauliflower veloute and a wonderful fish and vegetable bouillon. There’s an in-store deli, too, selling extremely high-end olive oils and jars of rillettes. It’s located at 72 Rue Saint-Romain.

Epic salads and crepes are the specialities at this quirky little spot, which has whitewashed walls of rough-hewn stone and a loyal clientele who have long known that this spot offers one of the best cheeseboards in Rouen: a platter with camembert (which originated in Normandy) as the star of the show is a mere £5 (lacornaelle.eatbu.com).

What to see and do 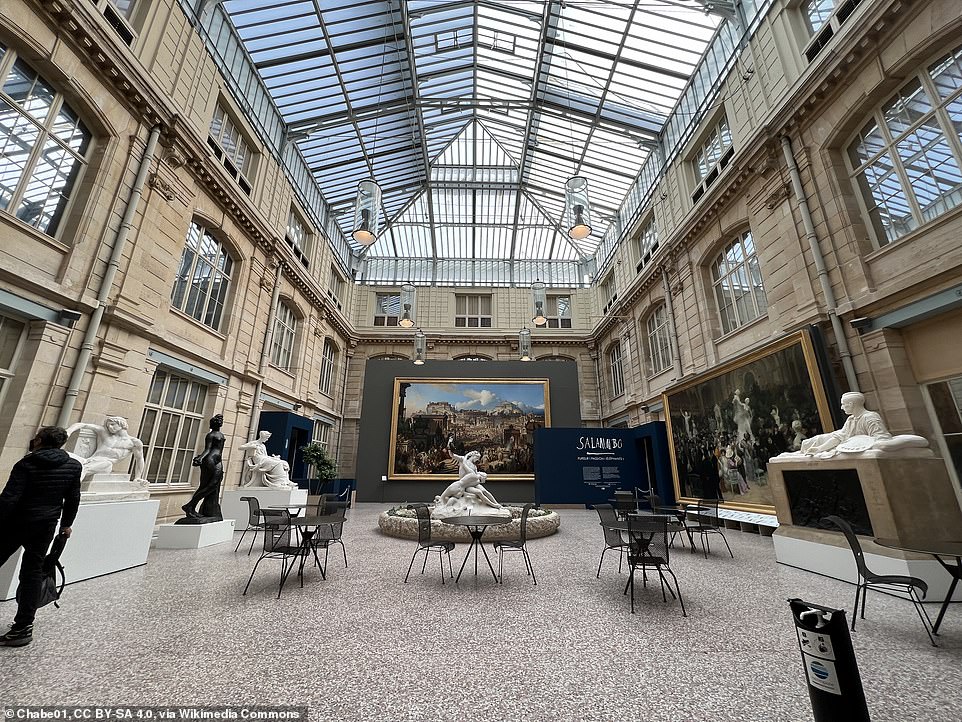 Head to the Musee des Beaux Arts, pictured, to admire artwork from the Impressionist movement. Picture courtesy of Creative Commons

Rouen is where the Impressionist movement began and the Musee des Beaux Arts (mbarouen.fr, free) has an outstanding selection of works from the late 19th century, including one of Monet’s sensual portraits of the Gothic cathedral and some beautiful provincial scenes by Camille Pissarro and Albert Fourie.

This year marks the centenary of Joan of Arc being declared a secondary patron saint of France, and the life story of the Maid of Orleans is told in a series of multimedia exhibits at the Historial Jeanne d’Arc (historial-jeannedarc.fr, £8.80). It’s mostly sombre stuff but includes a poster display of the many movies made about her. 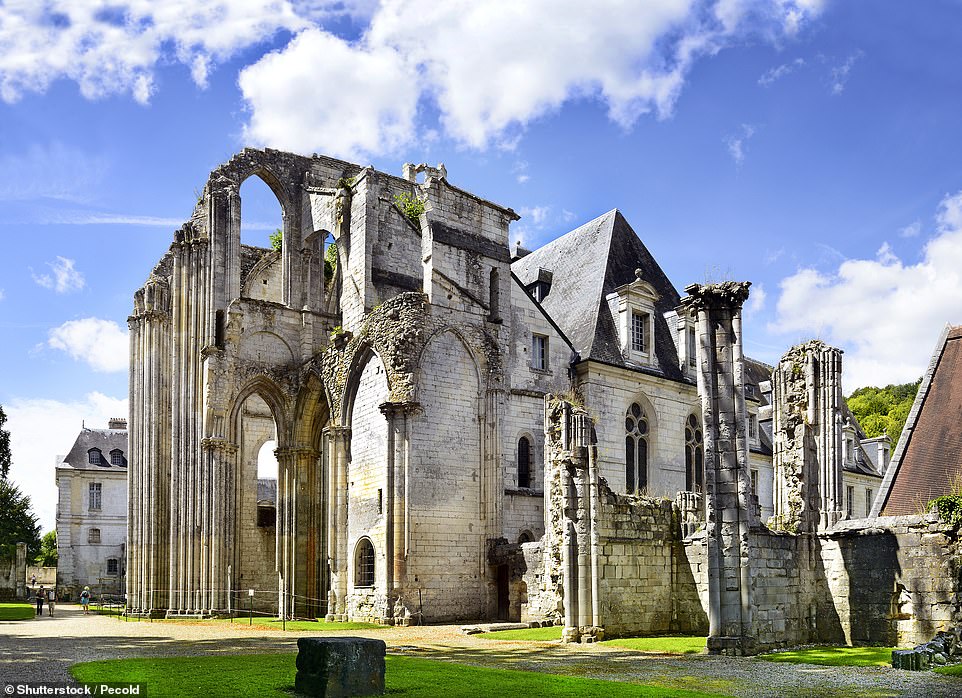 Buy a few bottles of beer at St Wandrille (above), the only abbey in France where monks make beer on site

Of course it’s easy to find good wine in these parts, but Normandy’s beer is pretty exceptional, too. Just 40 minutes from Rouen by bus, St Wandrille (st-wandrille.com, £4.15) is the only abbey in France where monks make beer on site. Buy a few bottles to take home after exploring the monastery and meeting the brewers.

Nobody in literary history has captured petit-bourgeois frustrations and doomed extramarital affairs like Rouen native Gustave Flaubert. Head to the Le Musee Flaubert inside the Chu hospital (chu-rouen.fr, £8.50) for a (self-guided) glimpse into the author’s life.

How to get there

Travel with Eurostar to Paris from £58 return (eurostar.com). A local train from Gare du Nord to Rouen takes around 90 minutes. More information can be found at en.normandie-tourisme.fr.