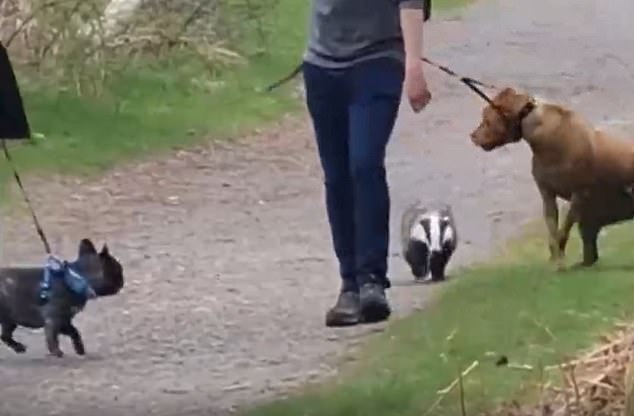 A fearless badger is harassing passers-by at a renowned beauty spot — leading the RSPCA to warn the public about its behaviour.

Dog walkers, joggers and families out enjoying the countryside have all fallen foul of the black and white menace.

The badger has been recorded prowling during the day in Cannock Chase, Staffordshire, and following two barking dogs who were being pulled away by their owner.

Despite the mammals’ typical nocturnal habits, this particular individual has been seen taking leisurely strolls in broad daylight.

Despite badgers’ typical nocturnal habits, this particular one has been seen taking leisurely strolls in broad daylight

The badger has run up towards barking dogs without flinching and chased a French bulldog, which sought refuge behind its owner

It has run up towards barking dogs without flinching and chased a French bulldog, which sought refuge behind its owner.

The RSPCA has warned the public to keep their distance from the badger and said its actions are not normal for the normally shy species.

It is unusually approachable towards humans and followed one female jogger over stepping stones of a nearby stream, before getting bored and turning back.

Ben Clay, 39, who filmed the badger while out walking with his children, said: ‘Someone walked past and said “Keep your dog on the lead as there is a badger wandering about”.

‘I just kept an eye on the children and then looked up and saw it trotting down the path.’ 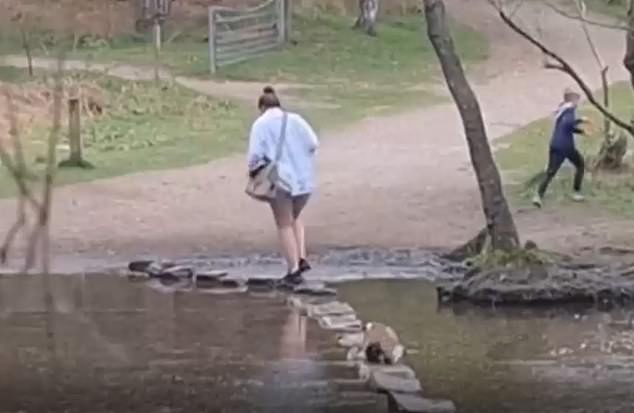 The badger followed one female jogger over stepping stones of a nearby stream, before getting bored and turning back

He captured the video and posted it on social media later on that day, writing: ‘Little badger came out to play at stepping stones in Cannock Chase.’

The video gained more than 370,000 views and almost 1,300 comments from viewers who were shocked and concerned for the animal.

Harris Dickenson said: ‘Might be worth a report to the RSPCA, that is not normal behaviour.’

Victoria Hedges said: ‘That’s not a good thing. That’s either a sick badger or one that someone has hand raised and released for some insane reason.’

Another commenter, Oli Bonell said: ‘It’s most probably riddled with TB acting like that in broad daylight and looks thin to me.’

A runner and a dog walker glace back at the badger as it wanders in the woodland. The RSPCA has warned the public to keep their distance from the animal

With Kath Gebski adding: ‘Poor thing, clearly something is wrong with him..’

‘Did he think the little dog was related to him?’ Newman Kelly questioned.

With Christopher Johnson adding: ‘Showing who is boss, pleased no one got too close.’

It is understood that the badger is now receiving care.

The nocturnal creatures are rarely seen in the day and live in large family groups in burrows under the ground, known as a sett.

Cubs are born in January or February but spend the first few months underground, only coming out in spring when it is a little warmer.

In a statement, the RSPCA said: ‘This is not normal behaviour for a badger, who are nocturnal and wouldn’t usually be seen in open daylight walking amongst people.

‘The RSPCA would advise that if anyone sees this badger – or any other – behaving like this, to keep a distance, and to keep dogs well away.

‘It may well be disoriented and could be unpredictable and aggressive.

Croatia holidays: The delights of an action-packed family adventure on the Cetina river
People left in stitches by hilarious crafting fails
Advertisement