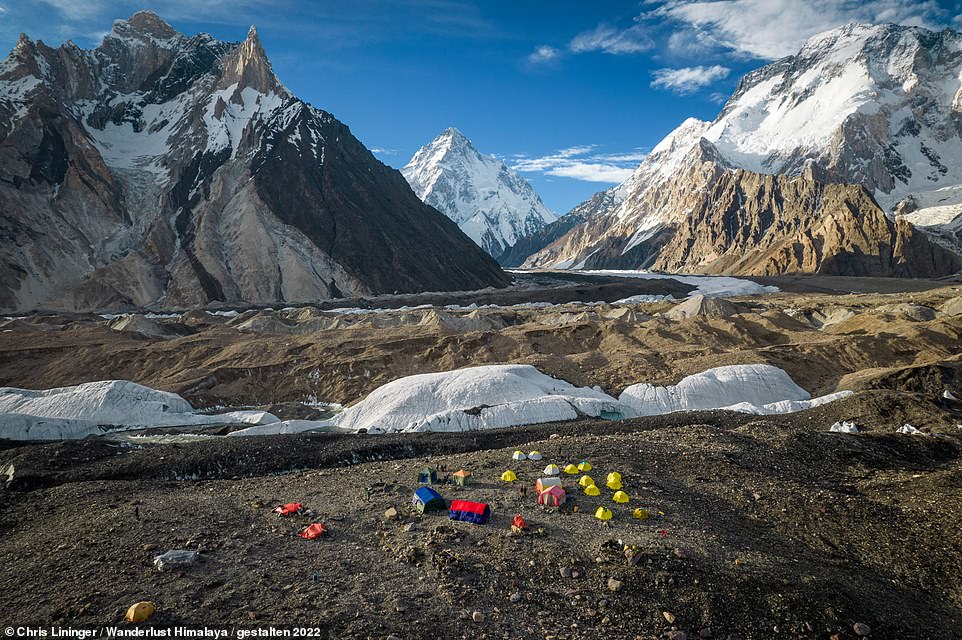 Get ready to be lifted to the top of the world.

Author and long-distance adventurer Cam Honan, an Australian who has been described as the ‘most travelled hiker on earth’, has penned a book about the world’s loftiest mountain region – and perusing its pages is a spellbinding experience.

Wanderlust Himalaya, recently published by Gestalten, is lavishly illustrated with incredible pictures of dizzying peaks – and is packed with expert guidance on the best hikes that weave around them, crossing lush meadows, epic glaciers and breathtaking rivers.

Honan, who has spent over a year hiking in the Himalayas, told MailOnline Travel: ‘Common mistakes hikers make are poor campsite selection, overestimating their fitness and skill levels, and processing potentially dangerous scenarios subjectively rather than objectively.

‘I always bring an appropriately rated sleeping bag, a shelter that holds up well in a storm, backpacking staples such as dried fruit and nuts, pasta, cereal, and chocolate – and the ability to maintain my sense of humour in crappy situations.’

Scroll down to see some of the book’s breathtaking photos, which show the incredible diversity of the Himalayan landscape.

The sprinkling of tents in the breathtaking image above is the basecamp in Pakistan for the world’s second-highest mountain – K2 (the pyramid-shaped peak in the background). Honan notes that the mountain, which is in the Karakoram Range and reaches a height of 8,611m (28,251ft), ‘has long been regarded as one of the toughest and most dangerous to climb’. Reaching the basecamp, which sits at an elevation of 5,150m (16,896ft), is far less challenging and, Honan explains, ‘is the turnaround point for one of the world’s classic treks – an unforgettable journey through a primordial landscape of serrated peaks, towering cliffs and formidable glaciers’. The 147km (91-mile) route cannot be tackled independently though, he warns, as the terrain is ‘demanding’. He adds: ‘It’s a trip best suited to fit and experienced hikers’ 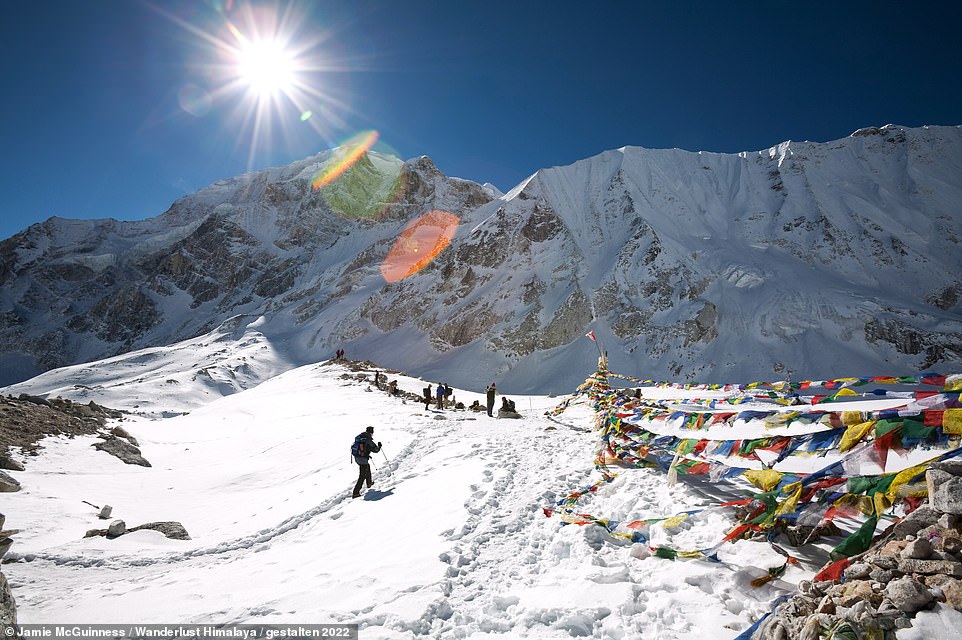 This mesmerising image was taken on Nepal’s Manaslu Circuit, which Honan reveals is a multi-week hike around Manaslu, which at 8,163m (26,782ft), is the world’s eighth-highest mountain. He says: ‘Physically challenging and culturally fascinating, it has equally impressive scenery as its better-known peers in the Annapurna and Everest regions, but with only a fraction of the crowds and tourist infrastructure’ 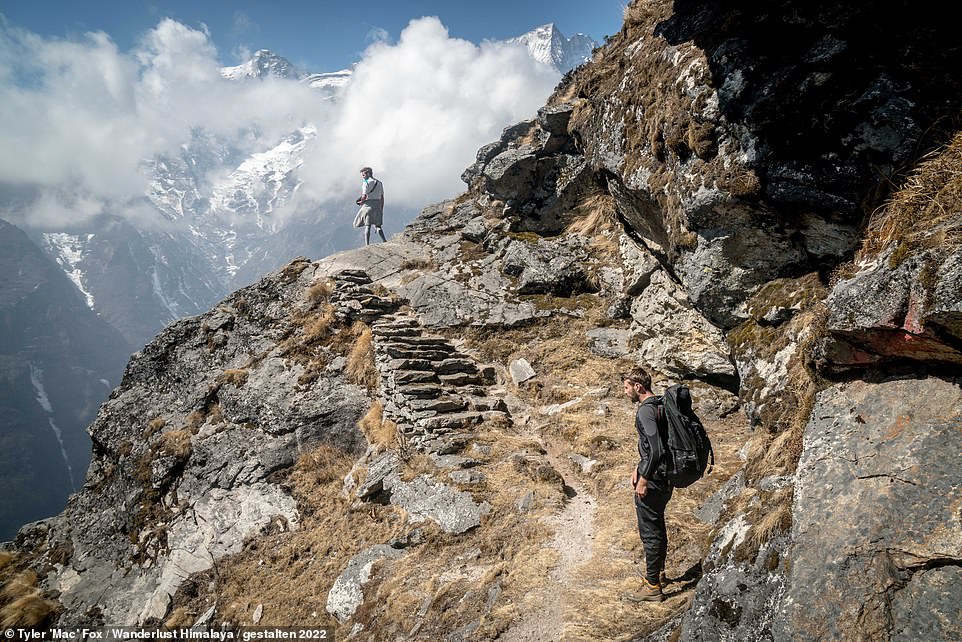 Two hikers tackle the 23.6-mile (38km) Advanced Everest Base Camp trek in Tibet, which is the world’s highest-altitude trek without the need for specialist equipment. It tops out, Honan explains, at 6,415m (21,047ft) and begins and ends at Everest’s northern base camp (5,150m/16,896ft). The author goes on to explain that while the popular route to Nepal’s Everest Base Camp ‘offers occasional glimpses of the world’s highest mountain, the best views of Everest available to hikers are to be found on its Tibetan side’ 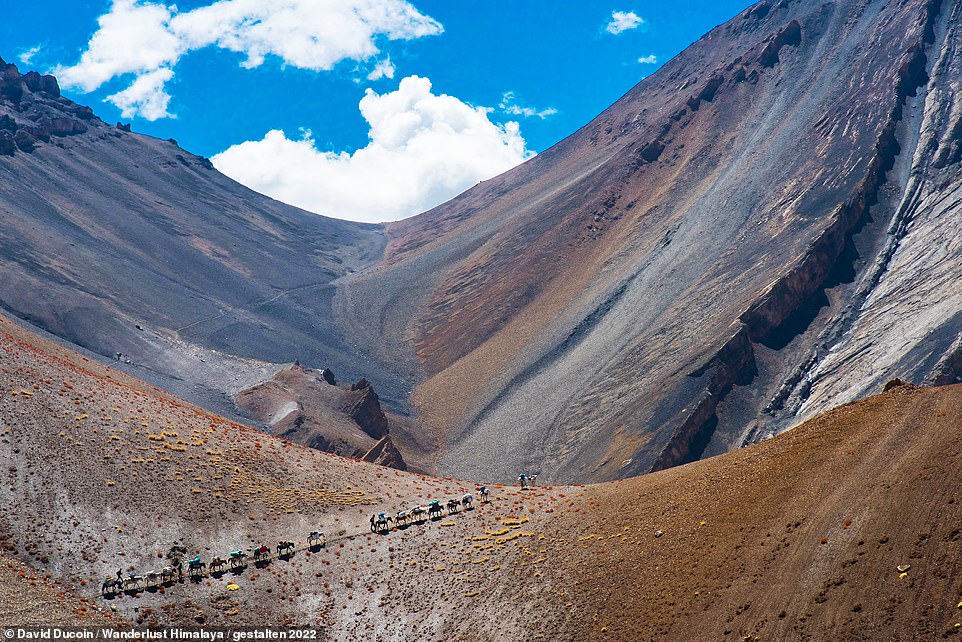 This stunning image shows horses being led along the route of the Phugtal Monastery Trek in India, which takes hikers to the ‘picturesque’ Phugtal Monastery, 3,902m (12,803ft) up in Zanskar, which Honan describes as ‘the hidden kingdom of the Indian Himalaya’. He explains: ‘Surrounded by impassable mountains and snowed in for more than six months a year, for centuries it was bypassed by all of the major trade routes across Asia. This geographic isolation, combined with its Tibetan roots, led Zanskar to become a haven of Buddhist culture. Phugtal was founded in the 15th century and is only accessible on foot. All supplies are brought in by horses, donkeys, or locals residents with strong backs and sturdy legs’ 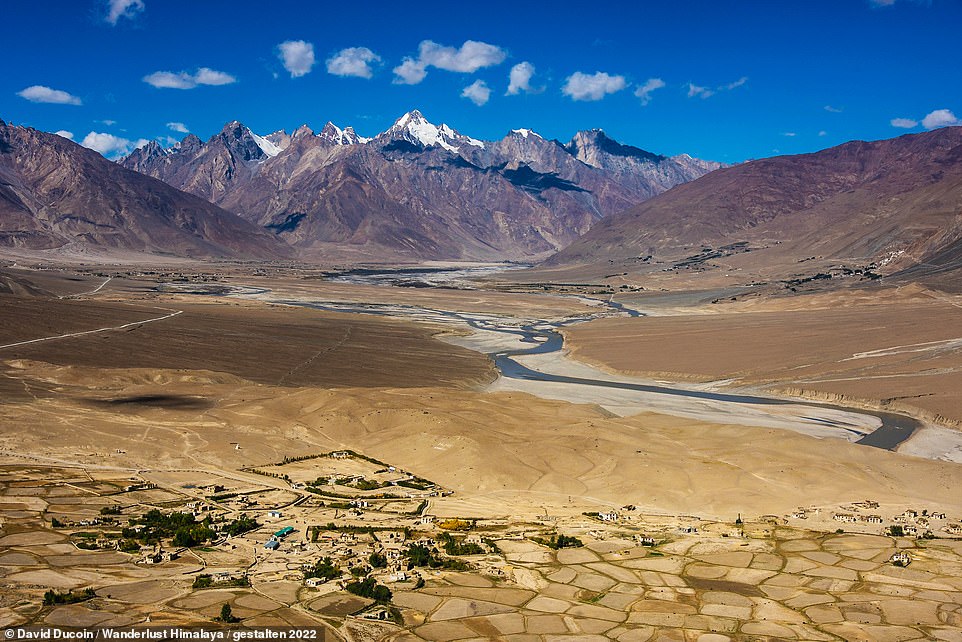 Pictured above is the wide expanse of the Zanskar Valley in India, which is only accessible between June and October 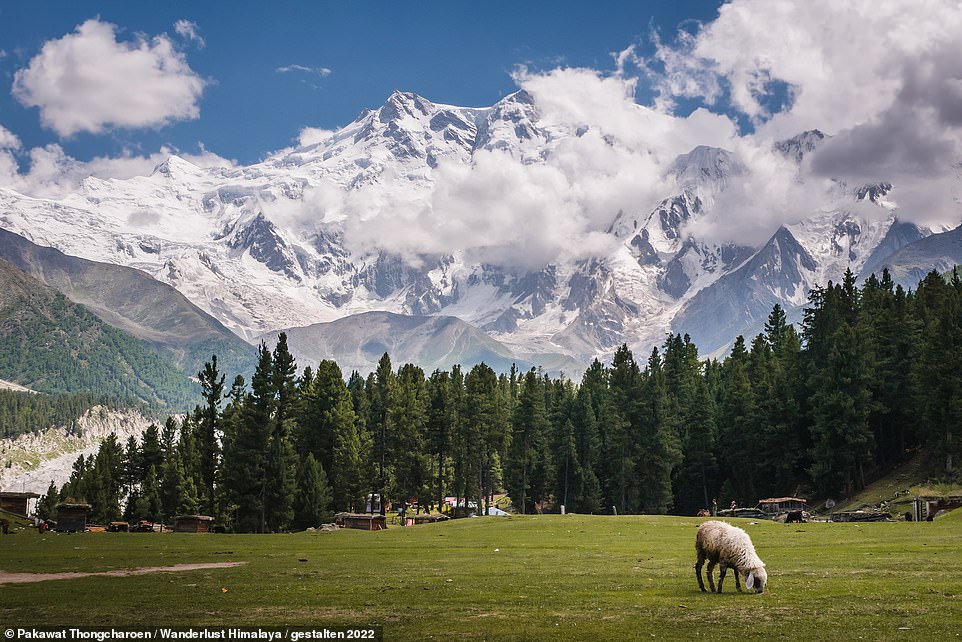 This jaw-dropping image shows Nanga Parbat in Pakistan looming over the tranquil Fairy Meadows National Park, which hikers heading to the base camp for the mountain pass through. ‘It makes for a perfect place to stay at the end of day one’ of the two-to-three-day hike, says Honan, describing it as an area of ‘lush green pastures and meandering streams’. Nanga Parbat, Honan reveals, is the ninth-highest mountain on Earth at 8,126m (26,660ft) in height and ‘from a hiking perspective, [its] base camp is the easiest to access of all the Himalaya’s highest summits’, although reaching it does involve a drive, preceding Fairy Meadows, in a four-by-four up ‘what is universally rated as one of the world’s most dangerous roads’. Summiting the mountain itself is also dangerous. In fact, Honan notes, it ‘has earned the nickname “killer mountain” for the high number of fatalities that have occurred on its slopes’ 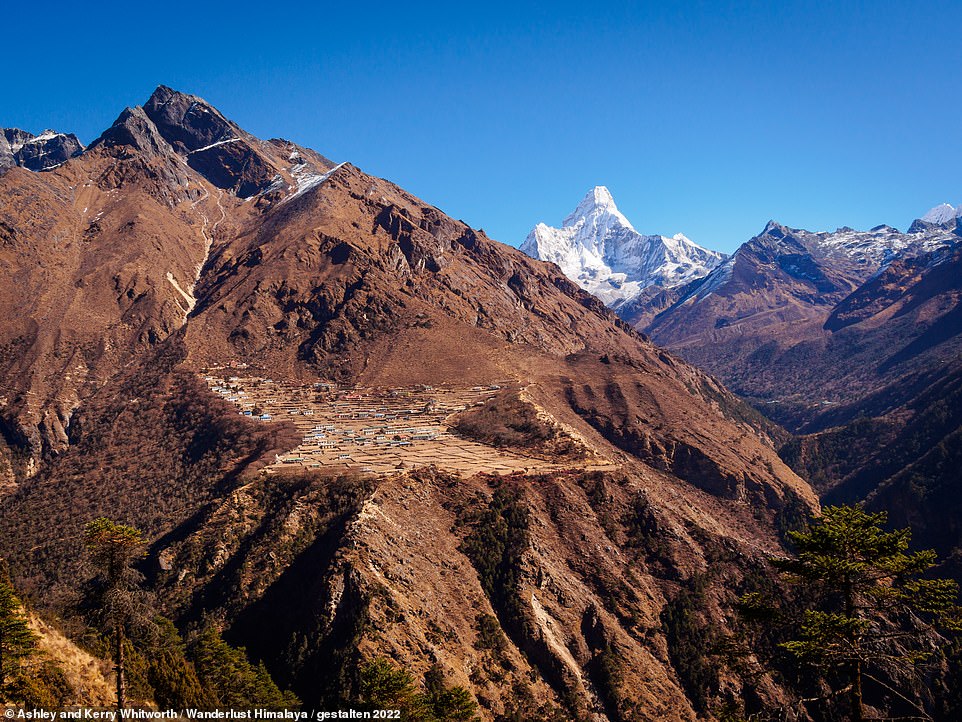 A spellbinding image of the Sherpa village of Phortse in Nepal, with the  6,812m- (22,349ft) tall Ama Dablam mountain looming in the background. This area is traversed by hikers on the Three Passes Trek, which encompasses a complete circuit of the Everest region, the book reveals 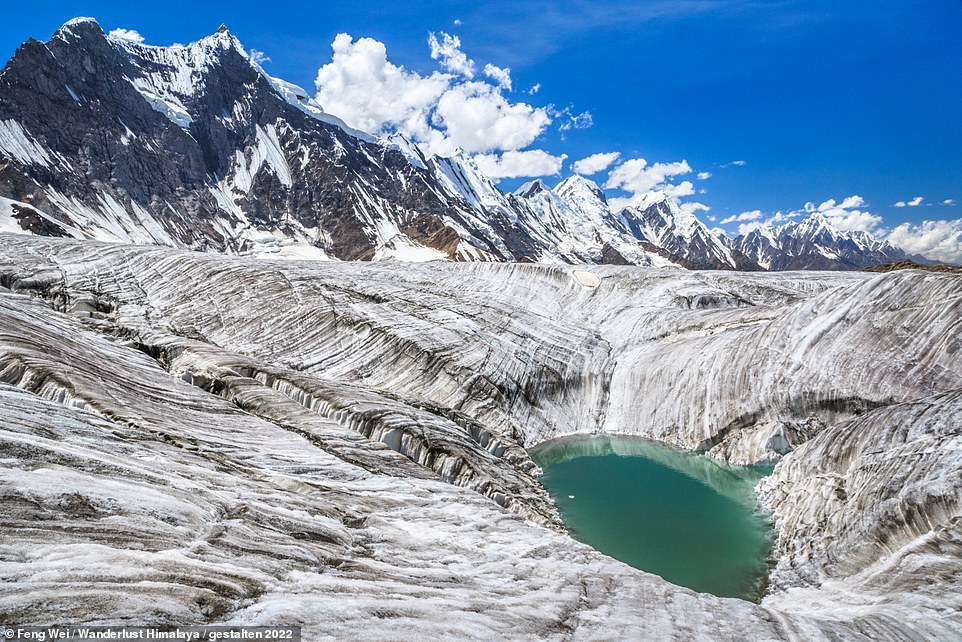 Pictured here is a melt pond on the 49km- (30-mile) long Hispar Glacier, as seen on the Snow Lake trek in Gilgit-Baltistan, northern Pakistan. The trek, reveals Honan, measures 117km (72.7 miles) and traverses Hispar Glacier and the adjoining Biafo Glacier (67km/41.6 miles), which together form the world’s longest glacial system outside the polar regions. Honan explains that ‘after five days traversing Biafo Glacier… hikers will arrive at the edge of the legendary Snow Lake (4,877m/16,001ft)’ which is ‘surrounded by a jaw-dropping amphitheatre of soaring rock towers’. The author adds that ‘it is a place so isolated that renowned mountaineer Eric Shipton described it in 1937 as “the last blank on the map”‘. He also points out that Snow Lake is a misnomer – it’s actually a glacial basin 16km (10 miles) in width 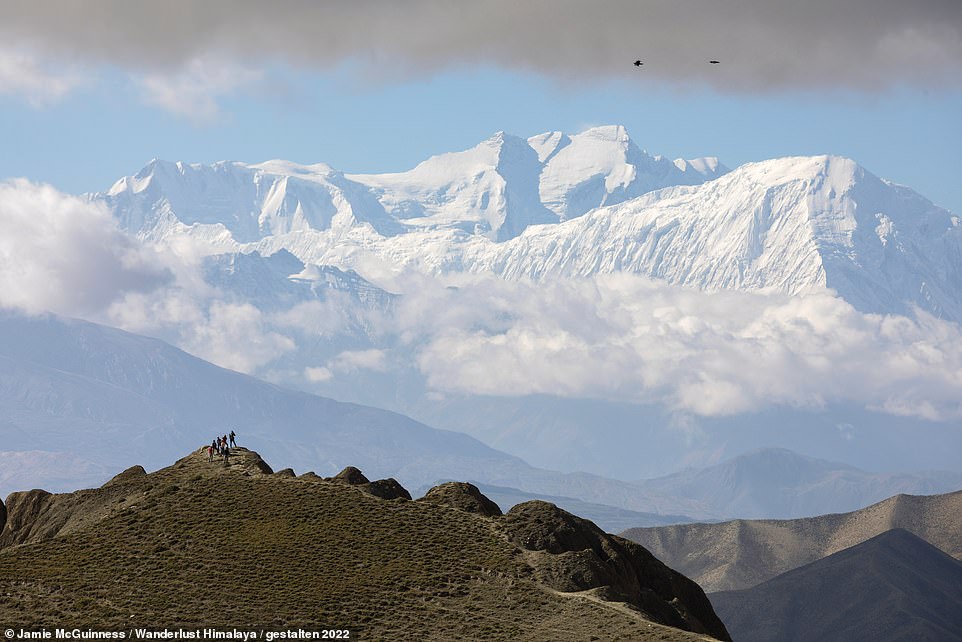 A group of hikers gaze over Mustang, with the 8,000m (26,000ft) Annapurna mountains seen looming in the background. Mustang, Honan explains, was an enclave of Tibetan culture in the Annapurna region of Nepal that was closed to foreigners until 1992 – and is the most arid district in the country. The author says that there are ‘myriad hiking possibilities’ in Mustang, with the premier trek ‘arguably a circuit around its Upper Region, beginning and ending in the village of Kagbeni’ 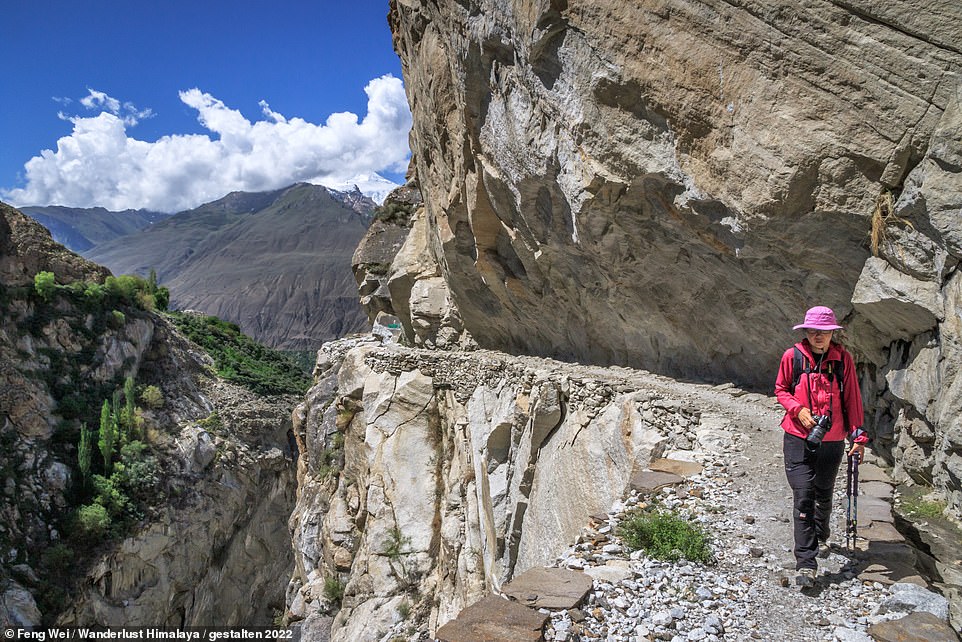 A female trekker on a spectacular cliff-hugging section of trail on the 7km-long (4.3-mile) Ultar Meadow Trek in Gilgit-Baltistan, Pakistan, which Honan says is suitable for all experience levels. Travellers to the Himalayas are bound to meet fascinating characters along the way, Honan reveals – ‘curious Buddhist monks, hospitable villagers, and harder-than-nails porters all come to mind’ 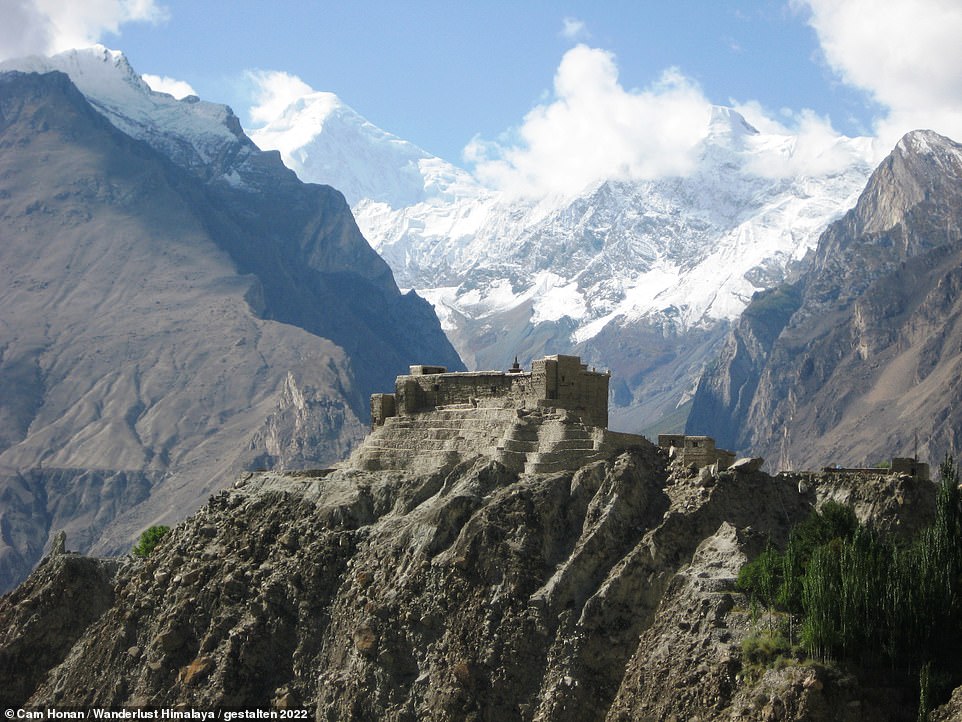 Established in the 14th century, Baltit Fort, in the Pakistani city of Karimabad at the foot of the Ultar Glacier, offers ‘outstanding views’ and is declared a ‘must-visit’. Honan describes it as ‘one of the most photogenic buildings in Central Asia’ 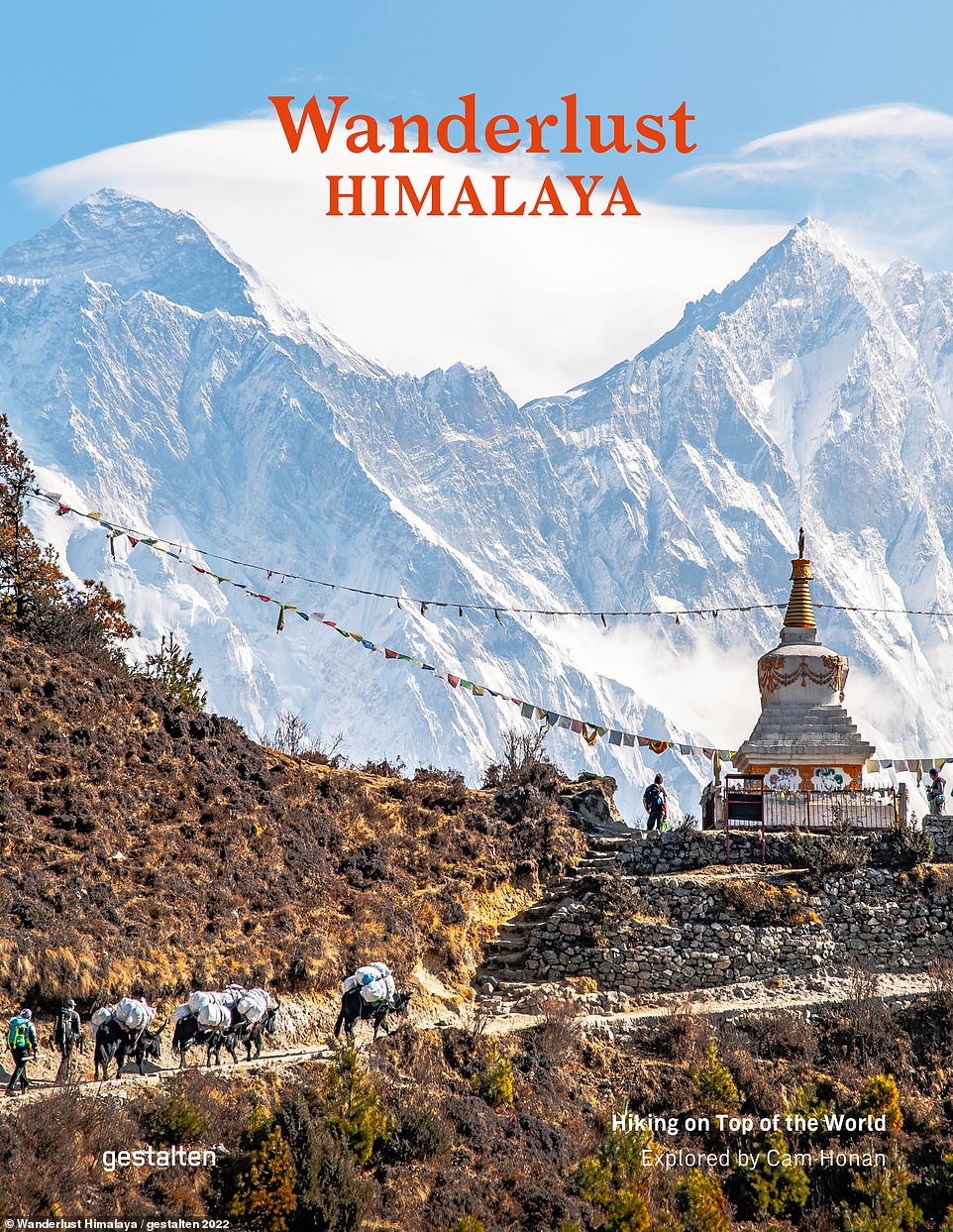 Wanderlust Himalaya by Cam Honan is published by Gestalten and is available to buy (£35) with free shipping to the UK, Germany and the USA

Hilarious gallery shows people who didn’t think before acting
Mayfair home of the London Underground founder is for sale for £16.5m
Advertisement