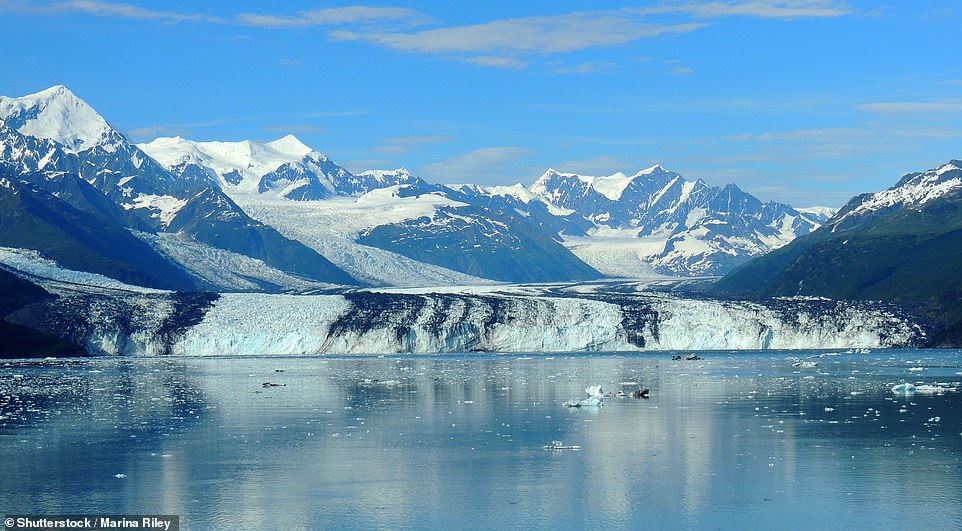 Riding in a high-speed catamaran along an Alaskan fjord, the captain asked: ‘See that glacier ahead? How far away do you think it is?’

A dozen of us on a boat tour were travelling under a cloudless blue dome of a massive sky with ice floes knocking the hull and waterfalls tumbling down hillsides on either side. An eagle flew high overhead, sea otters clustered in near-still water.

Our catamaran was in College Fjord, where glaciers are named after famous US universities. The one ahead was Harvard and its crevices and edges were so clearly defined that it did look close. Two miles, I thought, but it was obviously a trick question so I said five.

Wonderwall: Humphrey visits the massive Harvard Glacier (pictured) in Alaska’s College Fjord, where glaciers are named after famous US universities

‘We are 20 miles from our destination,’ revealed the captain. ‘That’s roughly the distance from England to France.’

It served as an indication of the vastness of this place – and if you crave stunning scenery and outdoor adventure, along with food to die for and an unusual holiday destination that will turn the heads of your friends and family, Alaska beckons.

You get a feel for the freshness and excitement of this far northern American state as soon as you step into the airport at the main city of Anchorage and come face to face with a giant stuffed polar bear. Nearby, an equally giant halibut is on display. 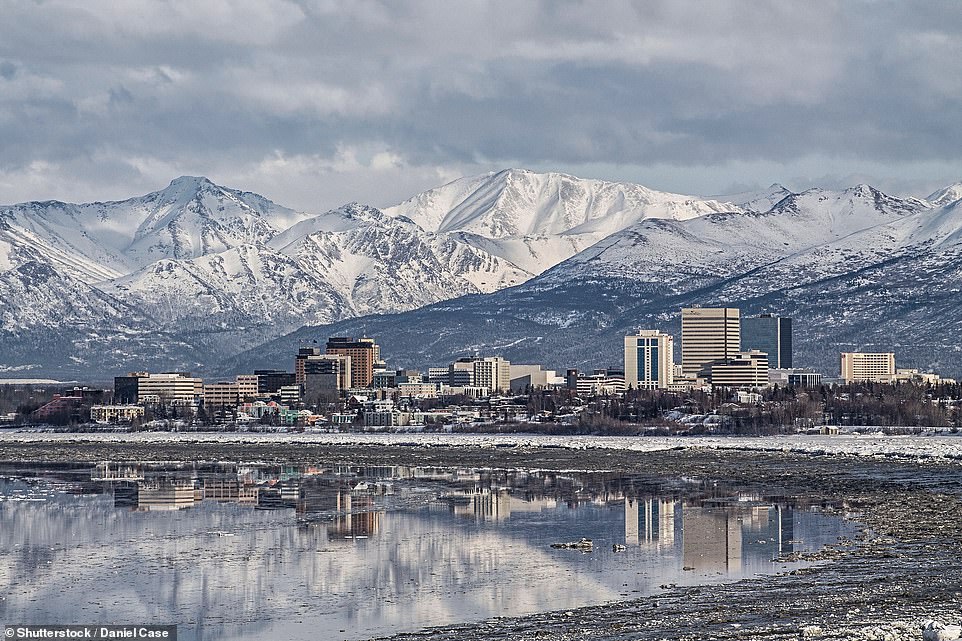 ‘You get a feel for the freshness and excitement of [Alaska] as soon as you step into the airport at the main city of Anchorage [above],’ writes James. The city lies at the end of the Cook Inlet, named after English explorer James Cook, who arrived in 1778 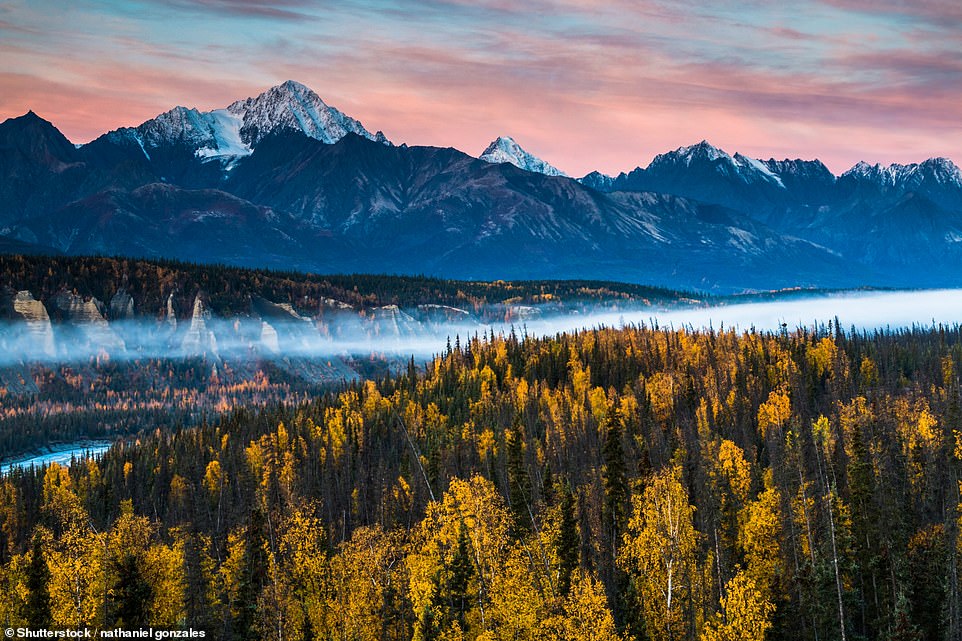 Humphrey goes on ‘the most fantastic afternoon out’ to the Chugach mountain range, pictured, with hiking guide Matt Worden

Outside is the largest seaplane port in the world, with aircraft of all colours, shapes and sizes bobbing on water. So many places are on lakes and inlets with no connecting roads that flying is the only way to get there – and there’s a lot of empty distance to cover: Alaska is seven times bigger than the UK but has a population of only 750,000.

The city lies at the end of the Cook Inlet, named after English explorer James Cook who arrived in 1778, and at the foot of the Chugach mountain range where hiking guide Matt Worden took me on the most fantastic afternoon out. The former military aircraft engineer owns Go Hike Alaska and offers an array of tours, including helicopter rides to explore glaciers and guided treks through the wilderness.

We tackled Mount Baldy, a 1,000ft climb up a well-marked trail, and when we emerged at the summit into an absorbing and tranquil expanse we roamed along the ridge with mountains on one side and panoramic scenes across the Eagle River on the other. 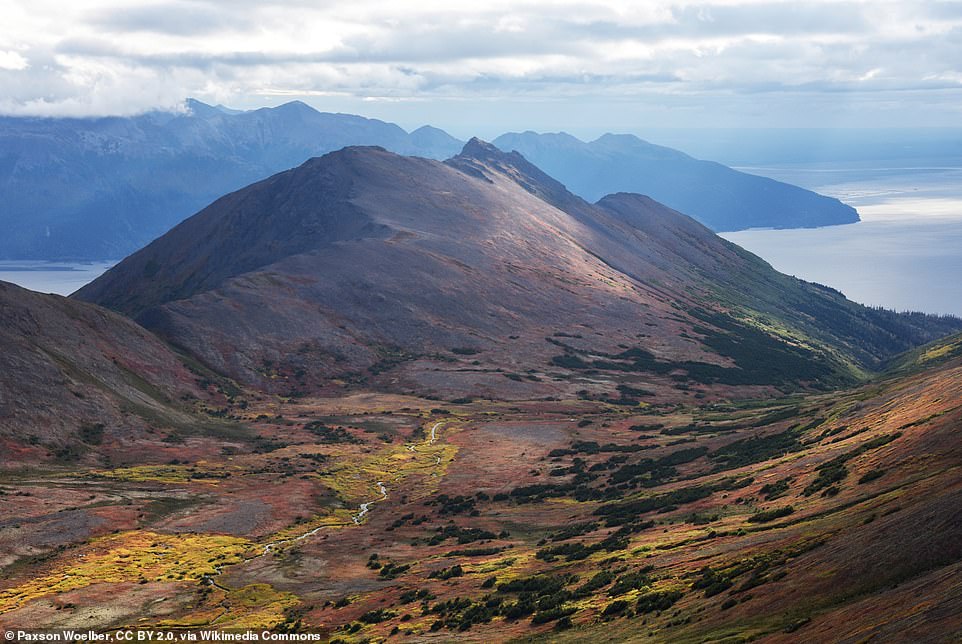 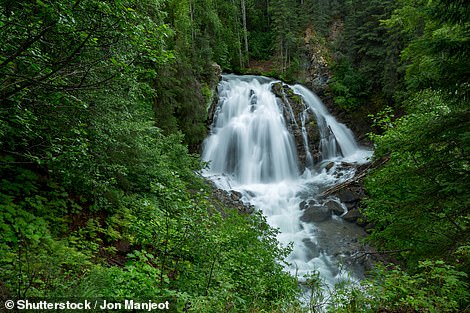 Our six-mile hike was classified as moderate. For a sight that’s easier to get to, Matt recommended the spectacular 60ft cascade of water at Barbara Falls. For the super-fit traveller, his pick was Rainbow Peak, a 3,500ft climb he described as a scramble.

Back in Anchorage, the dining is world-class. Head for Simon and Seaforts restaurant, right on the Cook Inlet, which is decorated with hunting and fishing trophies. Signature dishes include pan-seared halibut cheeks and grilled sockeye salmon with fennel relish.

You could even try to catch your own salmon from a stretch of water running through the city centre – just rent a rod, tackle and waders and head out to Ship Creek on the Eagle River when salmon are swimming upstream. 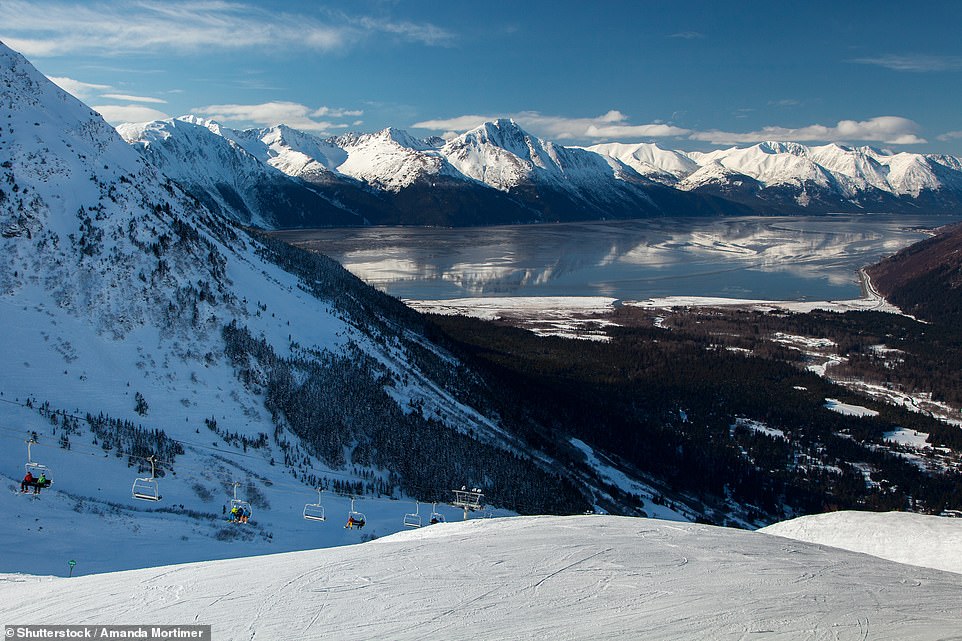 Skiing at the Alyeska Resort (pictured) in Girdwood is less than an hour’s drive away from Anchorage, Humphrey reveals

From cycling to seaplane rides, Anchorage has it all on its doorstep in winter or summer.

Skiing at the Alyeska Resort in Girdwood is less than an hour’s drive away.

You can learn to drive a dog sled under the Northern Lights or, in March, watch the start of the gruelling 1,000-mile Iditarod annual sled race between Anchorage and the western gold-rush town of Nome. 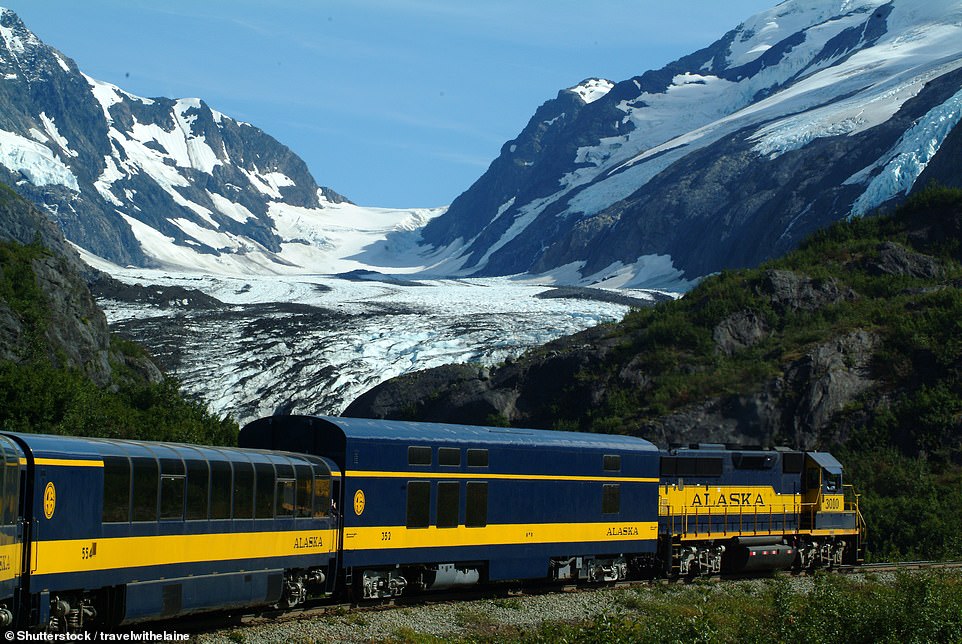 Humphrey recommends taking the Alaska Railroad, pictured above, for a scenic ride through the country 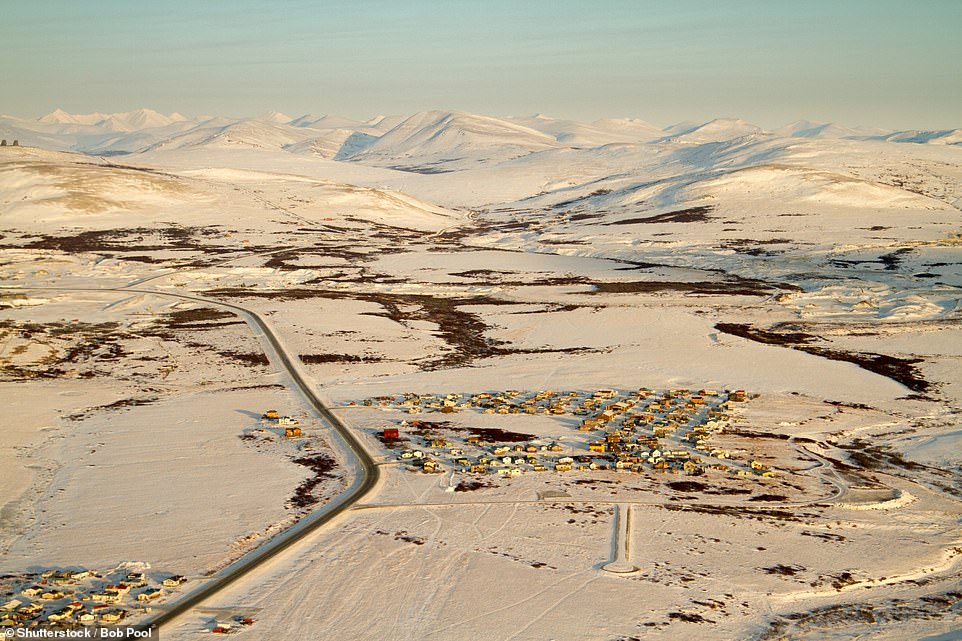 Watch the start of the gruelling 1,000-mile Iditarod annual sled race between Anchorage and the western gold-rush town of Nome (pictured) 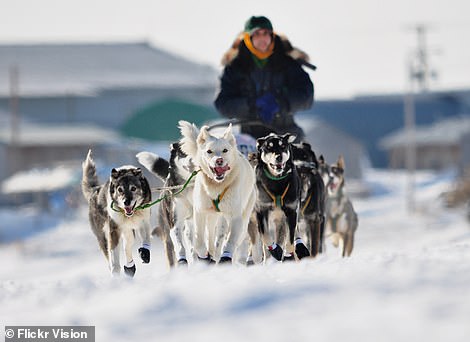 Alaskan dogs pulling a sled in the Iditarod sled race

Even on a bad weather day, there’s plenty to stimulate. The skilfully curated Anchorage Museum mixes an art gallery with history and culture. The nearby Alaska Veterans Museum relays the little-known story of the Second World War battle against Japan on the Aleutian Islands – the only American territory ever occupied by a foreign force. Just outside the city, immerse yourself in the Alaska Native Heritage Center with life-size exhibits of settlements, dance displays and storytelling.

Or take the Alaska Railroad for a scenic, water-hugging ride to the coastal town of Whittier, from where our glacier catamaran cruise set off.

We reached the glacier in time to see vast chunks falling into the water like collapsing cliffs, a reminder of nature’s power. As if on cue, a humpback whale launched itself out of the water before splashing down again, and a group of elegant and graceful porpoises swam alongside us on our final stretch back to port. 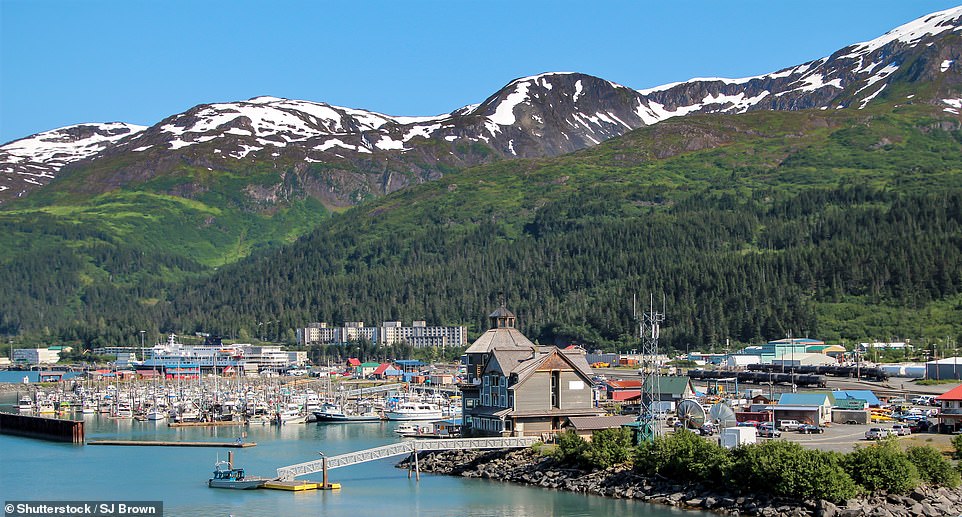 Humphrey Hawksley flew to Anchorage with British Airways and Alaska Airlines, with return flights from £1,045. He stayed at the Hotel Captain Cook (captaincook.com), where a deluxe room with inlet or mountain views costs £142 per night. He toured with Phillips Cruises and Tours, from £125pp (phillipscruises.com), and Go Hike Alaska, from £75pp (gohikealaska.com). More information at Visit Anchorage Alaska (anchorage.net). Humphrey Hawksley’s latest thriller, Man On Fire, is based in Alaska.